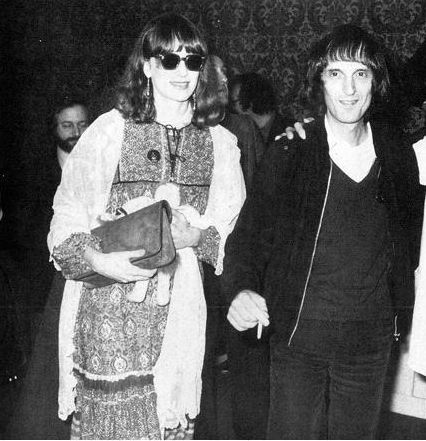 Daria Nicolodi was born on June 19, 1950. She is the daughter of a lawyer and philologist. (A philologist is a person who studies ancient languages.) Her younger sister became a university professor. That’s not the usual start for a creative genius, whose tastes run to the macabre, is it? Although Daria didn’t get her love from the occult from her parents or sister, she did learn a great deal from her grandmother, who practiced white magic and had a strong intuitive, almost psychic sense.

In this environment of intellectualism, Daria stood out. Her parents were not very happy with the idea of their daughter becoming an actress. They wanted her to do something else with her life. She disagreed and left home to attend the National Academy of Dramatic Arts in Rome in 1967, at the tender age of 17. Daria, who is fairly thin, is an eclectic beauty. She is not what one would call conventionally pretty. She did find work as a model, however.

Daria is probably best known for her collaboration with the “Italian Hitchcock”, the horror film director, Dario Argento. She is the mother of Italian film actress Asia Argento. Her older daughter, Anna, who was born in 1973 while Daria was involved with sculptor Mario Ceroli, died in a scooter accident in 1994. She was most intrigued by the 1970 film The Bird with the Crystal Plummage (L’ Uccello dalle piume di cristallo), in which the former film critic, Dario Argento, made his directorial debut. She vowed to meet him. Apparently, the young filmmaker made quite an impact on her.

Also in 1970, she made her film debut in Uomini Contro (Against the Men) as a nurse. She continued to work in minor film roles in 1972’s Salome and 1973’s I Nicotera. She gained some recognition for her work as Anita, in 73’s La Proprieta Non E Piu Un Furto (The Property is not a Theft). The film was nominated for a Golden Bear Award at the Berlin Film Festival and was directed by Elio Petri.

Soon after, Daria finally met Dario Argento. The two quickly discovered that they shared a lot of common interests and began a collaboration in life, love and work that would last over a decade. In 1975, Daria would star in the first of many films that Argento directed, called Profunda Rossa (Deep Red). Profunda Rossa is considered a classic of the horror genre and perhaps Daria’s breakout role. She played Gianna, a reporter, who works with the protagonist Marc (played by David Hemmings) to try and solve the mystery of the hatchet murders.

In 1975, we must remember that another Dario/Daria collaboration came into the world with the birth of their daughter, actress Asia Argento. Two years later, in 1977, Suspiria was filmed. Daria worked on the screenplay, along with Dario. Suspiria (Sigh) is about a trio of mean-spirited witches, who are also known as the Three Mothers. The story is loosely based on the stories of the occult that Daria’s grandmother (who was a strega – witch – herself) told to Daria when she was a young girl in Florence. Thomas De Quincey’s essay “Levana and our Ladies of Sorrow” from his Confessions of an Opium Eater (Suspiria de Profundis), also provides a wealth of inspiration for this project.

Daria wanted to play the lead, Suzy Bannen, in this film. However, the part went to the American actress, Jessica Harper. Many sources maintain that the American distributor wanted an American actress in the role. Regardless, the plot goes like this: Suzy was an American ballerina who arrived in Germany to attend a mysterious academy. Strange murders occur around her and she tries to figure out exactly what’s going on before she is killed herself.

Suspiria often gets mixed reviews from students and fans of film. In general, it isn’t known as much for its plot as it is for its style and surrealism – much of which Daria claims to have had a hand in developing. The film was meant to be part of a trilogy and seems, to some, incomplete, or lacking. (Note: The third installment of the Suspiria trilogy may never come to be, although rumors in the horror community run rampant that an American studio will be releasing a remake of Suspiria within the next few years.)

The second film in this trilogy was produced in 1980 and is called Inferno (Hell). Where we already “met” Mater Suspiriorum (Mother of the Sighs), the first of the three mothers, in Suspiria, in this film, we travel to New York and come into contact with Mater Tenebrarum (Mother of the Darkness). A young poet living in New York believes that the Mother of Darkness resides in her apartment building. She disappears but not before sending a letter to her brother who’s studying in Rome. The school he attends is run by the third mother, Mater Lacrimarium (Mother of Tears). Murders abound on both sides of the Atlantic in this film.

Although Daria did work a lot with Dario, she did the film Shock, one of the masterful Mario Bava’s last films. She played Dora, a young mother who couldn’t get over the death of her first husband in large part because the house, which she has moved back into with her new husband and young son, won’t let her. In fact, her son becomes possessed by the spirit of his dead father and wreaks havoc on all around him.

In Tenebrae (Darkness), Daria returns to working with Dario as her director. She played the part of the author’s assistant, Anne. In this film, Paul Neal, a best-selling writer, works with his assistant to discover which deranged fan of his is killing people close to him. The rumor mill has it that Dario based this film on his own experiences. Apparently, a fan of Suspiria inspired him to write this story with a completely macabre Argento twist, of course.

In 1984, Daria would work with her daughter, Asia, for the first time in the Italian mini-series, Sogni e Bisogni. In 1985, Daria would work on the comedy Il Maccheroni (The Macaroni) with legends Jack Lemmon and Marcello Mastroianni. She would also appear in Dario’s film, Phenomena, as Frau Buckner. The plot revolves around a young girl, played by Jennifer Connelly, who has an affinity for insects. The girl is sent to a school in Switzerland where the students and nearby villagers are being mysteriously murdered.

In 1987, Daria Nicolodi and Dario Argento would have their last film collaboration in Opera, which is known in other locales as Terror at the Opera. She plays Mira, the agent of the young understudy (Betty), who takes on the role of her life and gets more than she bargained for. The film focuses on an operatic production of the Shakespearean play, Macbeth. The performers are being murdered. Daria herself dies in this film. She’s shot in the eye. This isn’t the first time she’s killed in an Argento film, but it is the last and is sort of an ironic testament to the demise of the director’s longtime relationship with his muse.

Daria and Dario, who were never married despite rumors to the contrary, split up in the late 80s. Asia mentions that she went to live with her mother, but that, due to Daria’s commitments to stage and screen, she was often left with nannies. However, much else is NOT documented about the family relationship.

In 1987, Daria also played the role of Evelyn in Le Foto de Gioia (Joy’s Photo). This Lamberto Bava film is also known as Delirium. In this movie, a former hooker, played by Serena Grandi, runs a men’s magazine. Someone is killing her models and sending her pictures of their corpses.

Two years later, Daria would lend her skills as a narrator to the legendary story of Sinbad, starring Lou Ferrigno. Daria does two other films in 1989. The first is another Lamberto Bava film entitled Il Gioko (The Game; School of Fear). The movie deals with a young teacher who tries to figure out what kind of game her students are playing. The rules include rape and murder, unfortunately. Also in 1989, Daria performs as Sylvia Hackett in Paganini’s Horror. She is also credited with co-writing the script in which a rock band purchases a piece of music that is used in Satanic rituals.

Around this time, it seems that Daria left behind the horror genre, for the most part. For example, she was featured as the voice of Queen Camilla in the animated series, Avventura di Marina (Sea Adventures). She also appeared in the Cristina Cremini drama, La Fine e Nota (The End is Known) and worked with her daughter Asia again in Viola Baccia Tutti (Violet Kisses Everybody) 1998, a drami-comedy. The mother and daughter also work together in 2000’s Scarlet Diva. In this semi-autobiographical film of Asia Argento’s life, Daria was cast as – what else – her mother.

Today, Daria still continues to act. Most recently, she appeared in 2004’s Soleado (Sunny), a comedy directed by Greg Guinta. She’s been immortalized in print in the book Deep Red Diva, which was put out by Yellow Press back in 1995. She’s also given interviews in various documentaries about Dario Argento’s work.

Overall, Daria Nicolodi is an intelligent, complex and mysterious woman. She is often referred to as the Queen of Italian Horror. Some call her Dario Argento’s muse. Many know her only as the mother of Asia Argento. However, Daria is a successful actress, screenwriter and person in her own right. She has had a long career in an industry where a woman isn’t appreciated as much as she ages. She is mother, grandmother, friend, lover, daughter and actress.