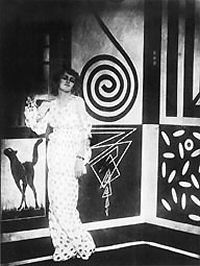 Italy was the first country to create an avant-garde movement in film, Futurism. The Manifesto of Futurist cinema dates back to 1916 (though some experiments were occurring before then) and was signed by, among others, Filippo Marinetti, Armando Ginna, Bruno Corra, Giacomo Balla, and other notable members of the Futurists movement. The Manifesto claimed that cinema was “by nature” a futurist art, thanks to the lack of a past and traditions, but the signers did not like narrative cinema; instead they wanted movies about travel, hunting and wars, and full of quick action. In their words, there existed a whole-hearted enthusiasm for the search of a new language unrelated to traditional beauty, which was perceived as a legacy of the past. Futurism was the first art movement to be interested in cinema as a language in itself and, a “movement language”.

The Futurists were among the first to grasp how special effects, widely experienced in the previous decade, could be used not just for cheap tricks, but as a means for a new creative, poetic and symbolic language.

A typical futuristic vision might be that of the abrupt landscape changes as seen from the window of a car, a train, or a plane. The themes of modernity and speed were their main concern. For Futurists, who admired movement and praised everything that was fast, cinema was the ideal art. Unfortunately, many of the works of Futurist cinema have been lost.

In 1916, Filippo Marinetti shot Futurism Life, a movie now lost, in which he and other members of the movement harassed the bourgeois. Another lost film is Il Re, Le Torri, Gli Alfieri by Ivo Illuminati. The characters were dressed as chess pieces and moved on a checkerboard floor.

The only significant film still preserved is Thaïs, also known as Perfido Inganno, directed by Anton Giulio Bragaglia in 1917. The story is rather conventional and similar to the troubled love stories of “diva-films” typical of the era, but the hypnotic scenery and symbols painted by the painter Enrico Prampolini deviates significantly from the tradition, creating an extravagant and oppressive world of spirals, lozenges, and chess boards, which heavily inspired the directors of German Expressionism.

Despite the manifesto and Futurism’s promise, the production of avant-garde film was rather limited. The first experimental films were those directed and produced by the brothers Corradini, who called themselves Ginna and Corra. In 1911 they released four hand-colored films (cinepitture), with scattered and confused patches of color. All four are now lost. These experiments were later taken up in the abstract cinema in Germany, by artists such as Richter and Eggeling, and also influenced the so-called aeropainting or second Futurism of 1929.

The Futurusts were not only interested in creating dramatic movies; they also loved popular comedy films that were often dominated by the pure movement in the scene (running, chasing, tumbling), enhanced by the editing.

Taken individually, none of the Futurist movies were works of great importance, but the movement’s scope was broad and it influenced all subsequent avant-garde cinema and some authors of narrative cinema. It was, in fact, an inspiration to the visions of some Hitchcock films.

Italian Futurism in film did not produce works that lived up to their revolutionary intentions, but the importance of the movement as a source of inspiration for all later avant-garde was enormous. In Germany, films like The Cabinet of Dr. Caligari (1919) and Metropolis (1926) have as a source of profound inspiration the Italian Futurist movement, and the same can be said of the French avant-garde, especially René Clair.

While the Futurists experimented, popular Italian cinema went on. Actors such as Emilio Ghione and Mario Bonnard, actresses such as Lyda Borelli and Francesca Bertini became the first movie stars, especially during the First World War between 1914 and 1918, when the tragedies of passions and tragedies won the favors of the audiences.

Also during this period the so-called propaganda film was produced in which a hero undertakes military adventures and distinguishes himself for courageous acts of heroism.

After the end of World War I, Italian cinema went through a tremendous period of crisis, mainly due to the proliferation of small production houses that usually went bankrupt after a few movies, and some unfortunate organizational decisions. Only the dramatic movies often inspired by classical literature and drama, and religious epics, celebrated some box office success. A noted director of the first kind of movies was Roberto Roberti (father of Sergio Leone), while the best known director for the second type was Giulio Antamoro.

Legendary names of the stage such as Eleonora Duse (who acted in Cenere in 1916) and La Bella Otero also appeared on the screens, causing some concern among audiences. As theatre divas, they were seen as ‘above’ cinema, which was in some cases not considered an art form at all.

A genre that held its place was the in Neapolitan Drama, thanks to the works of the first woman film-maker of Italian cinema, Elvira Notari, who produced and directed many song movies, performed directly in cinemas by famous singers and orchestras in sync with images.

Fascism came to power between 1922 and 1925, and in the beginning did not bother to try to save the film industry until the late twenties when made their debut two future stars of the telefoni bianchi (“white phones”) era: Alessandro Blasetti and Mario Camerini.

In 1924, the fascist regime suffered a crisis after the murder of the deputy Giacomo Matteotti; the Istituto Luce was created with the aim of promoting the image of Mussolini in Italy using the newsreel. Shortly after the Press Office was created; this would later become the Ministry of Popular Culture. After a disastrous fire in 1935 in the studios of the old Cines production company, the Ministry suggested the creation of an important structure for Italian film production in order to stop the decline of the industry. Mussolini approved in full. After two years of work, on April 21st, 1937 Mussolini himself attended the grand opening of Cinecittà, coining the famous slogan “Cinematography is the strongest weapon.”

“Vecchia Guardia”, was directed by Blasetti to celebrate the March on Rome

Cinecittà was conceived in the manner of Hollywood studios, with everything a filmmaker could desire to create a film: studios, technical services and the famous Centre of Cinematography which proved a veritable breeding ground for future famous masters, attached with the National Film Archive.

Two years later, on 1 January 1939, a ‘monopoly law’ was proclaimed which effectively blocked the import of most foreign films (mostly American) and supported numerous production of Italian films. It marked the birth of two genres : the white telephones comedies and the most cerebral calligraphy.

Although the era of the white telephone genre lasted only a short period, it was the most successful. Most of the telephones in Italy at the time were made of black plastic, and only the rich could afford the rarer white plastic ones. White phones were thus a status symbol found only in richer houses, the setting of these movies. Hence the term white telephone. Movie critics in recent years, however, prefer to call these movies Hungarian Comedy, because although they were Italian productions, the scripts were drawn from Hungarian authors and many movies were set in Hungary in order to circumvent the censorship in place at the time in Italy. The favorite subjects of these movies, in fact, were stories of adultery or divorce. The city of Budapest is often mentioned. Another definition is that of Art Deco Cinema for the strong presence of home furnishings that recall the style of International Art Deco, very popular at that time.

Real propaganda movies were produced during the Fascist regime, but in lower number than comedies, in order to keep the audiences’s mind off current events. Only toward the end of World War II were movies produced that directly addressed the current situation and tried to inspire “proper” fascist behavior and improve the efforts of civilians for doing their part in the war. The first fascist propaganda film, Mario Volpe’s Il Grido dell’Auqila, dates back to 1923.

Of the 772 films produced in Italy from 1930 to 1943, only about a hundred are classified as direct or indirect propaganda film and of these hundred, the largest number have indirect propaganda themes. Among the films that qualify as direct propaganda can be cited Camicia Nera by Giovacchino Forzano, Vecchia Guardia by Alessandro Blasetti, and Condottieri by Luis Trenker. The main characteristics of fascist propaganda movies were descriptions of the positive changes occurring with fascism, celebrations of the march on Rome and the rise of Fascism, demonstrations of love for the homeland, and an attempt to tell important historical facts about Italy, especially the themes of Italian Unification and the Roman Empire, exalting the actions of Italian soldiers in the war.

Many writers, actors, and directors of the time worked on propaganda movies and telefoni bianchi movies. After the fall of the regime, many of these filmmakers became part of the Italian Neorealist cinema movement, the next exciting development in the history of Italian Cinema.