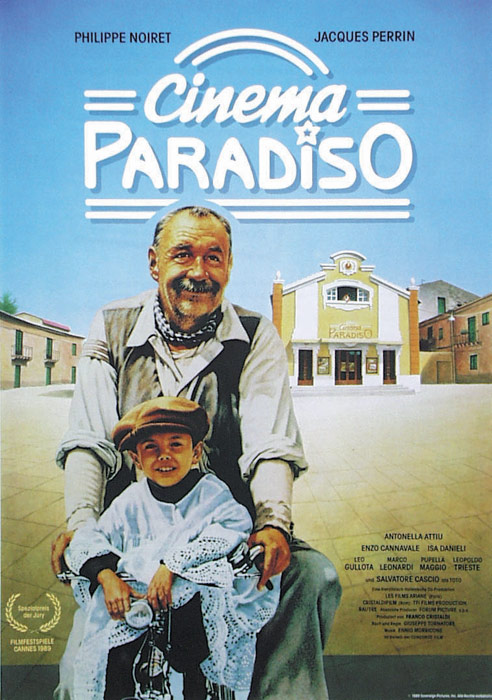 This are the 5 best from the article Best Italian Movies

The Italian Film Industry has produced some important movies that have gained international recognition and fame.

Il Postino (The Postman) was the last film starring Massimo Troisi, one of the most famous Italian actors in the ‘80s and early ’90s. He passed away within hours of completing the film, creating high expectations in movie goers and critics alike. Il Postino was consecrated to worldwide fame after its huge success at the Academy Awards.

Based on the novel Ardiente Paciencia by the Chilean writer Antonio Skármeta, it is the story of the friendship between the famous poet Pablo Neruda and his postman: two characters culturally and intellectually different, but close for sensitivity, lust for life and love for the South of Italy, with its scents and colors. For this reason, the poet becomes a sort of Cyrano de Bergerac for the young postman, who uses his poetry to woo his sweetheart Beatrice because, as the postman would say in one of the most famous lines from the movie, “poetry doesn’t belong to those who wrote it, but to those who need it!”

Il Postino was selected by the New York Times as one of the best movies of all times.

The film opens a window into the cinema of the past, as seen from the screen of a small picture house in a Sicilian town. Here, little Toto finds his first love: cinema.

We are talking about the silver screen of times gone, with its beautiful starlets and fascinating actors, its romantic scenes, and passionate kisses, scenes often censored by the local priest. But time shows no clemency and, just as it had happened to the stars of silent cinema, also Cinema Paradiso goes out of fashion, surpassed by technology and new trends. Its definitive closure at the end of the movie, represents much more than a simple cinema closing down, it represents the end of an era of innocence and serenity for each and every character in the plot.

However,  its images and magic, once so scandalous, survive over time and Toto, now an adult, can look at them again after many years, with admiration and deep nostalgia.

The last scene of “Nuovo Cinema Paradiso”, when the adult Totò looks again at the cut scenes that he collected as a child.

The Great Beauty offers an admiring glance into the enchantment of Rome and a sad look into the disenchantment of his inhabitants. Thanks to Jep Gambardella (Toni Servillo) we are introduced to the eclectic, bored world of a group of grown ups with no aim in life but superficiality and nothingness and an attempt to fill up such emptiness with parties and social events.

The breathtaking views of the city, with its statues and fountains, as well as the decadent lives of its protagonists brought to the mind of many viewers and critics a comparison to the unimitable Federico Fellini.  True or not, Sorrentino managed to raise the attention of international audience and critics towards Italian cinema, and won an Oscar while doing it. Not bad at all.

«The grande bellezza, like the grande tristezza, can mean love, or sex, or art, or death, but above all it means Rome… This is Sorrentino’s best film». (The Guardian)

It might seem impossible to celebrate life in a death camp and doing it with a smile, but Roberto Benigni, the director of La Vita è Bella has succeeded in the challenge. In the role of a father who tries, by all means, to hide the horrors of war and imprisonment from his son, Benigni delivers a poignant film, converting the tragedy into a hymn to life. For little Giosué, the death camps become the set for an important and difficult game: the more you resist, the more points you get. The young Jewish child receives “the most precious gift” a parent can give to a child: the ability to look at things with different eyes because, as is the will of Leon Trotsky, to which the film relates, «life is beautiful».

The scene “Buongiorno principessa” from the movie “Life is Beautiful”

This film was an instant success with public and critics alike, it was the highest grossing film in the history of Italian cinema, and one of the most viewed foreign films in the United States.

Trailer of the  movie “Mediterraneo”

The film, also thanks to Gabriele Salvatores’ successful direction, won the Oscar in 1992 as best foreign movie and marked the passage of Diego Abatantuono from comedic character to a multipurpose actor.

Mediterraneo is the story of a platoon of a few Italians who end up on a Greek island to establish a garrison during the Second World War. The War is over, but the news of the armistice reached this small Mediterranean paradise one year later. Time is motionless, and life flows slowly on the island. The soldiers end up forgetting about war and being enemies, letting their humanity take over: they become friends, reminding us that the secret of life is enclosed in the smallest of things.

Marrakech Express and Turné, along with Mediterraneo form the «Trilogy of Escape». The movie is «dedicated to all those who are running away».