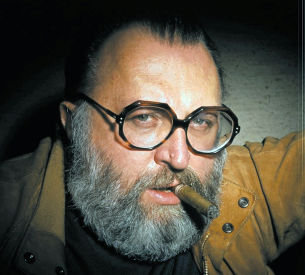 Sergio Leone is in many ways the least typical of Italian film directors. Leone was born in Rome in 1929, and began his career doing biblical-era epics.

His first great film was a remake of the Japanese director Akira Kurosawa’s film, Yojimbo. Leone’s film, released in 1964, was named A Fistful of Dollars. The film would contain many of the hallmarks of Leone’s early work. It enlisted the help of Leone’s lifelong collaborator, the peerless music composer, Ennio Morricone. The film was also the first in which Leone utilized the laconic Hollywood refuge, Clint Eastwood, as ‘the man with no name’. Conceived in Italy, shot mostly in Spain with a Hollywood leading man, this movie was the first of the ‘spaghetti westerns’. A Fistful of Dollars shows the early trademarks of Morricone’s: the main character has no name, he comes to a violent, lawless town, is forced to action, restores order and then moves on. He develops no relationships and expresses no emotion for any of the town members. He chews on a stogie and glints into the sun as he dispatches the murderous baddies with nonchalant efficiency.

With ‘the man with no name’ Leone and Eastwood had created a new motion picture archetype. This was not a cowboy of old like Gary Cooper in High Noon or Alan Ladd in Shane, afraid to use violence until the last possible moment. This was a character rooted in violence, who found his greatest possible expression in the practice of it. While the character was not as despicable as those around him, his anti-social tendencies and hair trigger temper made him different from celluloid cowboys that had preceded him.

After A Fistful of Dollars, Leone would make two more films with Clint Eastwood: A Few Dollars More and the classic The Good, The Bad and The Ugly, which co-starred Lee Van Cleef and Eli Wallach. Morricone ‘s score for this film has become one of the most influential and imitated in Hollywood. Van Cleef had made a career of playing hard-nosed cowboys, but the murderous character he played in this movie is considered, by critical consensus, the best performance of his career.

After completing ‘the man with no name’ trilogy, Leone moved to a film that was completely different, taking on new stylistic challenges and broadening his canvas as a filmmaker without losing any of his storytelling gifts. Released in 1968, the film, Once upon a Time in the West, was in many ways the polar opposite of the Leone westerns that had preceded it. While his earlier films moved quickly, this film moved with slow, stately elegance. While the earlier films were obsessed with violence and masculinity, this film had a female as a central character (the beautiful Claudia Cardinale), and was allowed to show the terrible price of violence instead of its sheer balletic aspect.

Charles Bronson was cast as the hero in the movie, once again as ‘a man with no name’. Henry Fonda was cast against type as a brutal, sociopathic gun for hire: it is one of his best performances. The film is a case study on the conflict between two approaches to life: the wandering, nomadic cowboy versus the permanent settlements of more docile townsfolk that would replace them. While there are brilliantly staged set pieces of violence, there are also wonderful, elegiac shots that capture the old west in all its untrammeled glory. The film is a visual masterpiece and to experience it properly, one should watch it in a letterbox version.

In 1984 Leone created another masterpiece called Once Upon a Time in America. This was a departure for him. Instead of his beloved American West, the film was urban, set in New York City throughout the 20th century. Instead of his usual protagonists, the film was a chronicle of the rise and fall of American Jewish gangsters. The film starred Robert De Niro and James Woods . The film is long and elegiac like Once Upon The Time in the West; the director’s cut is nearly four hours long. The original version had been taken from Leone by the American studio that released it, and edited to ill effect where the story made no sense and the performances were compromised. In its restored version, the movie ranks with Coppola’s Godfather saga as one of the greatest gangster films ever made. Leone’s re-creation of early 20th century New York City, in scenes from the gangsters’ childhoods, ranks as one of the greatest, most mythical versions of the city ever committed to film.

Leone died in 1989. He is the least archetypical of the Italian film directors, with his obsession with the American West and huge initial indebtedness to Kurosawa. It is, however, arguable that he is the most influential of the Italian film directors. Eastwood has admitted his debt to him, referring to him along with Don Siegel, director of the Dirty Harry films, as one of the two largest influences on his directing career. Quentin Tarentino also has admitted the influence, and with his poetic use of violence and his soundtrack-dominated action set pieces, it is easy to see this. With the creation of a new type of western and western icon with his ‘man with no name’ films and the creation of the two ‘Once upon a Time’ masterpieces, Leone earned himself a lasting place in the world cinema. His films will be continued to be enjoyed by his fellow filmmakers and the general viewing audience as for as long as film as a medium exists.