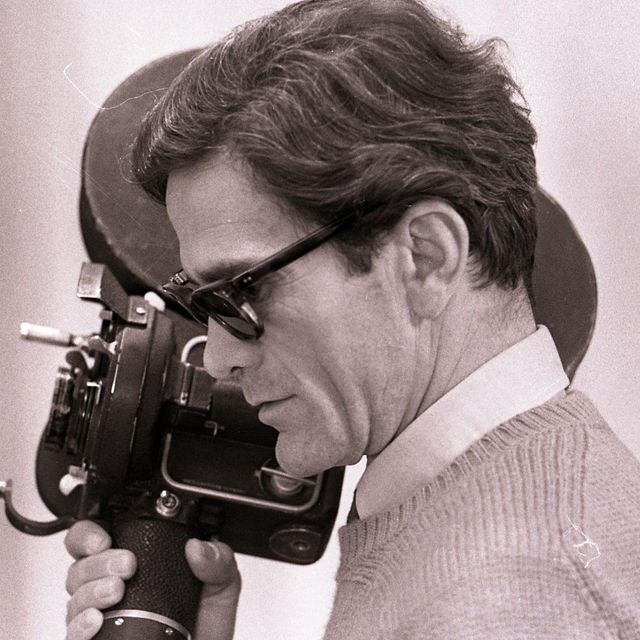 Pier Paolo Pasolini is undoubtedly one of Italy’s most representative artists of the 20th century: a writer, a poet, a movie director, Pasolini’s work mélanged protest with tradition, freedom of expression with a profound respect for the very roots of Italian culture, all the while maintaining a controversial approach to many of the socio-political issues that had been plaguing the country in the 1960s and 1970s. Pier Paolo Pasolini’s death remains  one of the biggest mysteries  of modern Italy.

Known for his visionary iconography and his courage, personal and artistic, in tackling difficult subjects such as homosexuality, abortion, divorce and the tragedy of nazi-fascism, Pasolini was an intellectual whose ideals were difficult to digest even for his peers. A man whose vision of society was well ahead of the years he lived in, Pasolini was a dissident within the dissidents: expelled from the Italian Comunist Party because of his homosexuality, he was often ostracized by the artistic community for its aesthetic ideals. Opposed by the rebellious masses of Italy 1968’s revolts when vehemently pointing out how the real “rebels” were not bourgeois university students, but rather those working class policemen who stood in the street to stop their at times violent protests, Pasolini brought his view of society into art without letting politics vulgarizing it.

His artistic production remains seminal for Italian art, in all its facets, from literature to cinema, from drama to linguistics. An immense artist, whose work has been included by US literary critic Harold Bloom in the Western Canon of world literature, Pasolini’s contribution to Italian and international culture has become more and more evident with the passing of time, but the mystery surrounding his untimely death has also deepened through the years.

Officially, Pier Paolo Pasolini’s death came by the  hand of an underage male prostitute in 1975, yet, his demise has been considered suspicious by many since the very moment it occurred. Conspiracy theories sided more reasonable and believeable possibilities, also supported by new evidence and the words of the protagonists of that tragic night. Here is what officially happened and what current theories say about the demise of one Italy’s most polyhedric artists.

Pasolini was brutally murdered on the night of the 1th of November 1975, and found by a woman at around 6.30 a.m the following morning. Investigations into his death suggest that he was cruelly beaten with a stick and run over by his own car on a beach near Ostia, a famous seaside resort just outside Rome. His assassination was ascribed to Pino Pelosi, ‘ragazzo di vita’ of only seventeen years of age.

Pelosi subsequently pleaded guilty, declaring to be the only person present at the time of Pier Paolo Pasolini’s death. According to his version, he met Pasolini at the Stazione Termini, the Italian capital’s largest railway station, where they agreed to go out for a meal together. Later that night, they would have traveled in Pasolini’s car, an Alfa Romeo GTV 2000, to the outskirts of Ostia, where the tragic homicide took place.The brutal action was allegedly unleashed by a fight caused after a request for sexual favours was brought forward by Pasolini.

According to Mr Pelosi, he was threatened by the same stick eventually used to kill the writer. However, this version of the story seems in many ways unconvincing. First of all, as reported by detectives, the stick considered the crime weapon was rotten to the core, hence making it unlikely to have been able to cause any kind of considerable damage or wound. Moreover, the young man’s build was way too gaunt and fragile to endanger the writer, who was not only attributed with a considerable strength but was also widely regarded as a karate expert.

Another anomalous factor was that Pelosi was void of any kind of visible wounds or marks typical of a man who had been into a fight. The lack of injuries or marks on Pelosi implied Pasolini did not oppose any type of resistance to his aggressor, something which appeared peculiar.

During the years, doubts on this mystery never faded and new elements have come to light, also through the voice of Pelosi himself.

In May 2005 during an interview with Roberta Torre, an Italian director who was filming a documentary about Rome and its suburbs, Pelosi affirmed unexpectedly not to be the real murderer of Pasolini and that he remained silent for all these years due to the fear he may put the lives of his family and friends in danger. According to these revelations, a new reconstruction of events suggests that five men were involved and should have been convicted for the murder. Details of the event and the names of these men were made public only three years after these revelations.

In fact, an interview to Pelosi released on the 12th of September 2008 and published on the enquiry work Profondo Nero (Deep Black) written by Giuseppe Lo Bianco and Sandra Rizza, shed new light on the murder. During the interview, Pelosi asserts that the death commando appeared in a second vehicle, a FIAT, and that they followed Pasolini and Pelosi to the beach, this being where the murderers decided to make their move. The writer was killed in cold blood whilst the perpetrators yelled “dirty communist” repeatedly. It was argued that young Pelosi could only witness the event in horror.

If Pelosi is to be believed, the motive for such a calculated murder can be traced to the book Pasolini was writing at that time. Petrolio, as he named it, was supposed to reveal new elements regarding the death of Enrico Mattei, an Italian public administrator and politician, who also died under strange circumstances on the 27th of October 1962. The book was also a direct attack against right wing’s economic strategy and its will to put the public in alarm of a hypothetical danger in order to maintain their political power.

In 2010, the investigation was reopened after the interest of Valter Veltroni, former mayor of Rome and, in his youth, close friend of Pasolini’s, who wrote an open letter to the authorities to rise once again more interest in the case. Apparently, what eventually played in favour of the reopening was the finding of inedited notes written by Pasolini revealing important secrets of 1960s and 70s Italian politics.

The interest around the case and the figure of Pasolini spiked up. In 2014, the movie Pasolini, directed by Abel Ferrara, hit cinemas around the world. The film focuses on Pasolini’s last days and on his sexuality. Ferrara had asked an Italian writer, David Grieco, to write the movie’s screenplay: Grieco was a close friend of Pasolini’s and one of the first people to reach the murder location on that Fall morning of 1975. Even though Grieco refused to collaborate with Ferrara, the proposal awakened in him the desire to speak up once more about the tragic demise of his friend. In the same year, he began filming a movie, La Macchinazione (literally, the machination), centred on the last three months of Pasolini’s life. The movie, set to be released in the Fall of 2015, 40 years after Pasolini’s murder, is based on a series of events happened during the Summer and Fall of 1975 which, according to Grieco, may have all contributed to the death of the artist. In any case, Grieco strongly support the idea that Pasolini was, indeed, murdered because he was a “persona scomoda” – someone bothersome – to the highest echelons of the Italian socio-political world. Once again, documents related to his last book, Petrolio, published incomplete and postumous, are named as a possible reason behind his murder. The movie, according to his director, is rich in new information which he considers of “relevance from a penal point of view,” hence potentially useful for the police.

In the past 10 years, the “Caso Pasolini” has turned a bit into a Pandora’s box: an initial interest opened up the way to numerous investigations (official and non official) and new evidence began appearing. Considering this, it came as no surprise to know that RIS, the Carabinieri’s Crime Scene Unit, had begun new evidence’s analysis in late 2014. What did come as a surprise was, nevertheless, the fact they did manage to isolate traces of DNA from Pasolini’s clothes and the weapon used to kill him. Surprisingly, the DNA did not correspond neither to that of the artist, nor to that of his alleged killer, Pino Pelosi. Further scientific investigation has shown the presence of 5 unknown types of DNA on Pasolini’s body. The traces, which all have hematic origin, appear to prove Pasolini and Pelosi were not alone that night, as the officially accepted version of the events maintained, although it does not necessarily support entirely Pelosi’s revelations about the killing commando to be held responsible for Pasolini’s death. Unfortunately, the police have not been able to match the DNAs to anybody so far.

Pasolini’s tragic end remains one of Italy most mysterious events and if, on one hand, it did help create a palpable, almost mystical aura around the artist, it also often prevents people from thinking of Pasolini for what he should really be remembered: his art.

If it is true that justice has to be done, it is also essential to let Pasolini’s work speak, not his murder. As Foscolo wrote in his masterpiece, I Sepolcri, an artist is remembered and survives for ever through his art and how it touches the souls of others. It is time to let Pier Paolo Pasolini live in his art and for his art, not exclusively for his early and tragic death.