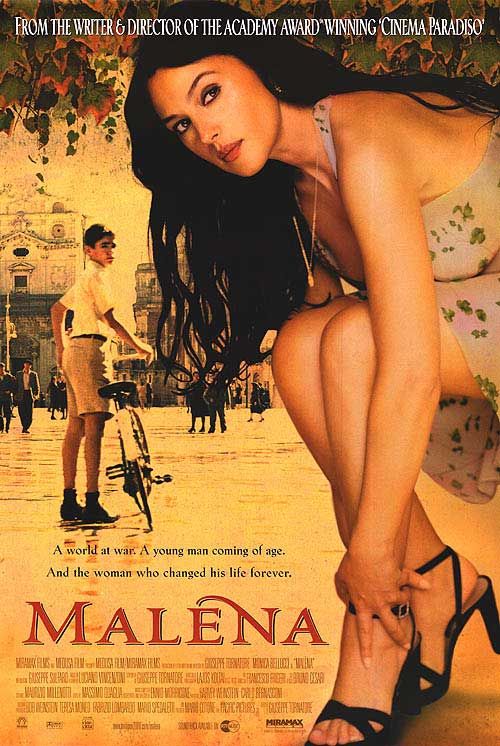 Some people say that Malena, a 2000 film, written and directed by Giuseppe Tornatore (Cinema Paradiso), is over-rated. Personally, I don’t think that the film gets enough credit. This film is excellent. It’s partly comedy, partly drama. It’s a microcosm of life. This film does so much in a short time. Malena deals with so many topics; the film gives one a sense about fascist Italy, World War II, coming of age and a woman’s struggle to overcome gossip and jealousy to make an honest life for herself despite great hardship.

Malena Scordia, played by the beauteous Monica Bellucci, moves to Castelcuto with her father, a Latin teacher at the local school. She inhabits the home of her husband, Nino. He’s a soldier fighting in Africa. Malena is gorgeous. The whole town takes notice – the men and boys want her; the women want her gone. Everyone says horrible things about Malena. They paint her as a loose woman just because she’s curvaceous and gorgeous.

Renato (Giuseppe Sulfaro) notices Malena one day with his pals. He, too, becomes smitten with the beautiful woman. Renato is only 12 or so. She is his first crush; despite this, Malena is not aware of him. She tries to keep her distance from most of the people in the town.

Of course, Malena’s standoffishness doesn’t endear her to the towns people. They continue saying terrible things about her. Her father receives a note from someone saying that Malena is sleeping around. He automatically believes it – and disowns his child. Malena has trouble finding work; and, as the war progresses, goes hungry. She has no money and the women at the marketplace are cruel to her. When she can afford food, she is given the most disgusting of wares.

Malena does seek the help of an attorney one night after two suitors have an argument outside her home. By this time, she has received word that her husband, Nino, has died in the war. Bereft and lacking any income, she begs an attorney to help clear her name. Centorbi (Gilberto Idonea) helps clear Signora Scordia’s name. When Malena tries to pay him, he tells her that he doesn’t want her money. He basically rapes the young woman to receive his payment.

Renato is the silent viewer (or stalker) who sees all of the dramas in Malena’s life unfold. He wishes to protect her; but, he can’t because he’s just a boy. Renato also has other problems – an overbearing father who is not a fan of Il Duce (Mussolini), a mother who doesn’t understand what it’s like to be a young man and manly urges and desires that he can do little about.

However, it is Malena’s story that we are most interested about. The gossips continue to spread lies about her. Centorbi, the lawyer, tells Malena that he wants to marry her. He mentions how she has little other options. She seems to agree. Unfortunately, Centorbi’s mother forbids the union. Centorbi breaks off his relationship with the beauty. She has nothing and no one. Not only is her husband dead but her father perishes in an airborne attack that destroys half of the city.

Malena starts trading sexual favors for food. Some of her johns include the Germans who have implanted themselves in the Sicilian city. This only makes the townspeople hate her more.

After the war, the women take their revenge on Malena. They drag her out into the courtyard and beat her publicly. They basically run her out of town. No one helps her. No one stands up for her. All the men who had their eyes on her, turn their heads away as their wives, mothers and sisters kick and bruise her.

Soon after, her husband Nino Scordia returns from war. He wasn’t dead, after all. He is desperate to find his wife. No one will tell him where she went; or, what happened. People continue to gossip. Renato feels sorry for Nino and finds a way to give the man some solace. He sends Nino a letter and tells him that Malena was faithful to him until she was told he was dead and that she did what she did to survive. Renato also tells Nino that Malena was headed for Messina.

Nino gets on the train to find his wife. No one sees the couple for a long time. By the time they return to town, Renato has a girlfriend and has come closer to manhood. People respect the fact that Malena returned after what they did to her. The women also note that Malena looks life-worn and has put on weight. They are less intimidated by her now. She comes into the marketplace and is offered the finest of wares as both an apology and deference to her status as a wife.

In the end, we realize that life will go on pretty much as it used to. The wrongs done to Malena will never be made right; but, she will survive. Renato will go on to have many loves but will never forget the first woman to turn his head.

Malena is a poignant film that deals with many issues. All are done so eloquently although our main character, Malena, barely speaks a word. I must say that I thoroughly enjoyed this movie and highly recommend it to anyone.