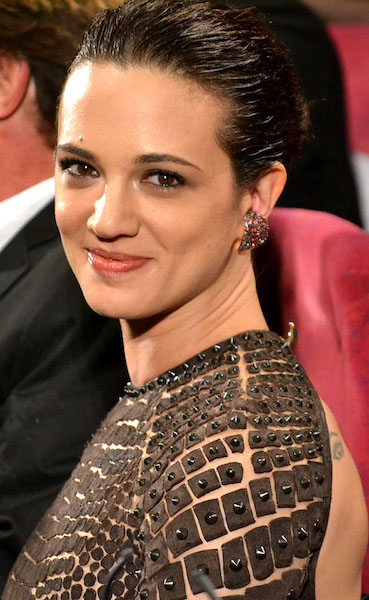 Scarlet Diva stars Asia Argento. She also wrote and directed the film. Asia doesn’t deny that this is a self-serving piece and even says, quite dramatically, in the opening segment that it “saved my life.” Asia plays Anna Battista, an Italian film actress. The film is somewhat disjointed, blatantly sexual and a bit melodramatic at times. Of course, it has a great visual appeal – quite stylized (Considering it was shot with a digital camera that’s quite an accomplishment!) and an impressive alt-rock soundtrack.

Throughout the film, there are flashbacks to a pre-teen Anna, who clearly still carries some mommy issues. Her mother, played by Daria Nicolodi (Asia’s real-life actress mom), was herself an actress. She was also drug-addicted (Not the real-life mama, just the movie mama!). In one flashback sequence, her mother’s “doctor” brings mama some medication while he’s visiting the child who has measles. In another, we learn that Anna’s mother died while the girl was still quite young.

Anna also has a great affection for her older brother who dies in a motorcycle accident (just as Asia’s real-life older sister, Anna, did.).

After winning an award for a film she starred in (and a groping by a producer), Anna heads off to Paris to hang out with her friend, Veronica (Vera Gemma). Veronica is involved in an abusive relationship with a drug dealer. When Anna discovers her, Veronica is hog-tied. Veronica swears she loves her man and can’t get enough of him.

Quickly, the girls head off to a club. An Australian band is playing. The lead singer’s name is Kirk. (Note: Asia wrote a novel entitled I love you, Kirk about a relationship she had with a rocker that was similar to this one.) They have a beautiful one-night stand that Anna wants to turn into something more.

Over the next few months, Anna is bereft without Kirk. She’s waiting by the phone. She says she’s the “most lonely girl in the world”; but, she’s not always alone. One afternoon, a busty blonde vixen named Quelou, played by adult-film actress Selen, visits her on the way to the airport for a sexy, lesbian tryst.

Soon, Anna discovers that she’s pregnant with the rocker’s baby. She seems to want to build a family with Kirk. Unfortunately, upon her return to Paris to see his band play, Anna discovers that Kirk is married and has children. This is a horrible blow to her, one that leaves her quite shaken. She is very pregnant and runs off in high-heels. She falls and a hand is held out to her, perhaps the hand of hope?