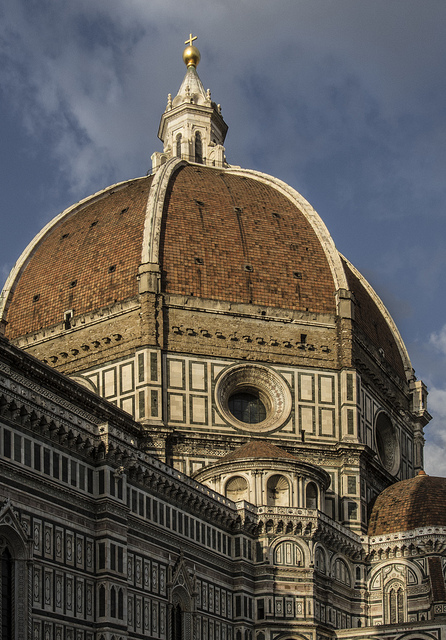 This is part one of our trip through Early Renaissance in Italy. This time, we meet the genius of Filippo Brunelleschi.

The Italian low Renaissance marks a pivotal time in art history. It’s when Italy shifted from the Gothic style of the Middle Ages to the Renaissance style. And Filippo Brunelleschi embodies this change.

As Italy began to recover from the economic chaos of the Middle Ages wealthy, independent, city-states became fiercely competitive. They wanted to attract the best and brightest artists and thinkers. A new class of wealthy merchant-rulers developed. With one artistic goal: obtaining the finest of goods and services. They had interest and funding. So, artists could paint beyond portraits and religious topics.

In fact, the commissioners wanted their mastery and skills. Art was supposed to impress. The style became more naturalistic, showing a growing interest in science. Artists were now concerned with human proportions and shapes, both in painting and sculpting.

Names such as Donatello, Ghiberti, and Brunelleschi served as the blueprints for the world. And for artists like Michelangelo and Leonardo da Vinci.

Born in Florence, early on, his father noticed Filippo’s skills. So, he taught him to write and the use of the abacus. In 1392, he became an apprentice at the workshop of a local goldsmith, where he learned design. That’s when he met Paolo dal Pozzo Toscanelli, a merchant and medical doctor. Toscanelli taught Brunelleschi geometry and other mathematical principles.

Eventually, these lessons led Brunelleschi to develop a mathematical formula for one point perspective. This technique could be used to determine the size an object in a painting should be in comparison to how far away it is. He rediscovered linear perspective, incorporating it into his works.

In 1401, Brunelleschi participated in a competition. The competitors had to design the new Baptistery doors for the Florence Cathedral. Others participants included names like Ghiberti and Donatello. In the end, the participants agreed that Ghiberti had the best results. Hence, they petitioned the judges, asking them to give him the victory.

Still, Brunelleschi’s panels were equal in technique and style. So he was asked to be Ghiberti’s assistant on the project. He refused, saying that he preferred to be the best in some other venture. This began a fierce, but friendly, competition.

Brunelleschi traveled to Rome to study with Donatello. They worked hand in hand, influencing each other. In 1418 Brunelleschi entered a competition to find the best method of constructing a domed structure. He developed several machines. Thanks to them, he won the right to finish the Gothic Cathedral of Florence. The exterior of his dome is as aesthetically pleasing as the interior. Also, his designs and techniques can be seen in many buildings throughout Italy.

In 1421 Brunelleschi acquired an industrial patent on a barge with hoisting gear. Then he became the first person in history to hold such a patent. In 1446, after a long career, Brunelleschi passed away.