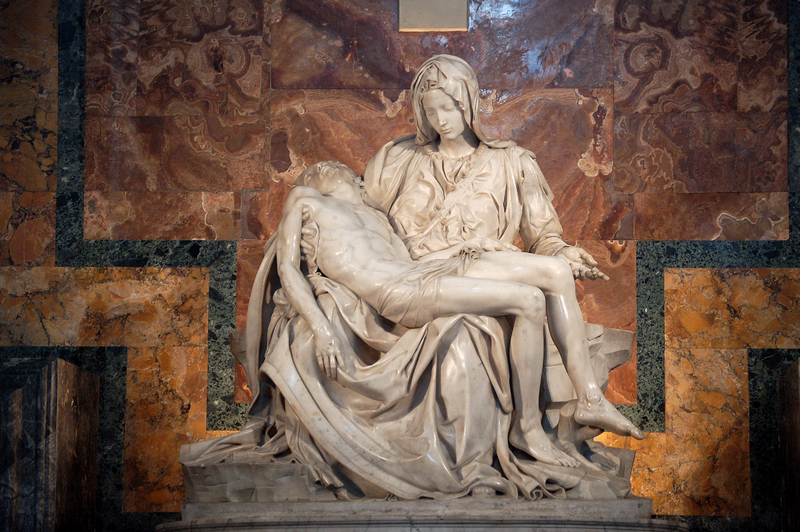 Italian art in the Renaissance changed the way the world conceived art and artists. In fact, no other artistic movement has contributed more to development of art as a whole.

The Italian High Renaissance is the defining movement in the country’s art history. Before, the artists held the same position as any other skilled craftsmen. They had as much respect as carpenters and goldsmiths. But, in the 1400’s this changed. A new revolution in art opened the eyes of the world to the glory of art itself.

Before 1400s the primary subjects of art were religious. Aside from commissioned portraits most artists made their livings painting biblical scenes and portraits of saints. It was generally assumed that only religious imagery was deserving of reproduction.

The painting technique was primitive, with little respect to correct anatomical form, atmospheric condition, or geometric shape. Paintings appeared flat and lack luster. The subjects were showed in profile and a lack of appropriate shading gave them no real depth or perspective. But, Italian art in the Renaissance discovered  a new interest in Greek and Roman culture. This led to an explosion in knowledge about the human form. As well as innovations in mathematics and science.

Suddenly, all creations of God (and the human form in particular) became revered. They were a testament to God’s great power and perfection. Beauty became connected to morality and the pursuit of beauty became widespread. The nude human form, linear perspective, and atmospheric perspective became vital for the artists. So did observing the natural world.

Artists were elevated in social status. Finally, their works were looked upon not as mere crafts, but as miraculous creation. They were inspired by the divine.

Italian art in the Renaissance

At the forefront of the Italian art in the Renaissance were: Michelangelo, Leonardo, and Raffaello.

Michelangelo di Lodovico di Leonardo di Buonarroti Simone was born in 1475 in Caprese. As a young artist, his greater influences were Masaccio, Giotto, Signorelli, and Donatello. Michelangelo focused on sculpture. And the Pietà, his 1500 sculpture, attracted the attention of the Catholic church. During his career, the artist served six Popes, often arguing with them about payments and procedure.

Michelangelo felt so much pressure by the Church that he started doubting his own faith. Despite his doubts, Pope Paul III named him the official architect of the new St. Peter’s Cathedral. This was supposed to be the headquarters for the Roman Catholic Church. Unfortunately, he died before seeing its completion. In fact, Michelangelo died in 1564 while the Cathedral was finished in 1590.

The David & the Sistine Chapel

Michelangelo is most renowned for his sculpture David and his work on the Sistine Chapel. The inspiration for the sculpture came from the Greek sculpture Spear Bearer. But, unlike Greek sculpture, David is vibrant and alive. The sculpture stands in tension and energy to defeat his foe. His youth and vigor is not silently encased in stone. Instead, it is projected for the viewer to see.

The frescoes on the ceiling of the Sistine Chapel have the same muscular energy. Michelangelo spent four years working on this massive 700 square yards of the of the nearly 70 feet high vaulted ceiling. The artist spent the four years on his back, with paint and plaster dripping into his face. Since the paint could only be applied while the plaster was still damp, Michelangelo was forced to work on small sections at a time.

Michelangelo faced a dilemma. In fact, the human figures had to share the same anatomical proportions. This would make the Sistine Chapel a coherent composition. The artist overcame this dilemma by igundi (nude youths) at the intersection of the fresco panels. These figures gave continuity to the varying scenes. The most familiar of these scenes is the Creation of Adam. In this scene, God stretches out his hand to a soulless Adam to breathe life into his listless body. It represents the transfer of energy between painted subjects. And viewers can see it and feel it.

Leonardo was Michelangelo’s contemporary. Born in 1452, centuries later he is still one of the icons of Italian art in the Renaissance. When he was a teenager, he did an apprenticeship with Andrea del Verrochio. Although painting wasn’t Leonardo’s only calling. In fact, he devoted himself to learning. He studied subjects like mechanics, municipal construction, botany, geology, flight science, canals, architecture, astronomy, mathematics, acoustics, warfare, hydraulics, medicine, and anatomy. Indeed, he was hungry for knowledge.

Thanks to his anatomy studies, he refined his talent as an artist. Leonardo wanted to recreate the human body. As accurately as possible. He gained his knowledge from the dissection of cadavers, which was illegal at the time. He risked death or life imprisonment to study the muscle structure. Leonardo reportedly kept body parts in his home for research. He documented the first correct anatomical study of a human fetus. His enthusiasm for dissection eventually forced him to flee the Vatican to avoid prosecution.

His most well known work is The Last Supper. And, of course, the Mona Lisa.

The Last Supper depicts the final gathering of Jesus Christ with his disciples. Leonardo creates depth with linear perspective and each of the disciples features a different expression. The focal point of the composition draws the eyes of the viewers. It’s the face of Jesus.

On the other hand, the Mona Lisa demonstrates Leonardo’s love of art as a science. The painting features a triangle composition with a careful observation of both lighting and atmospheric conditions. The Mona Lisa has carefully shaded lips and her eyes have an expression that is diffuclt to read. The viewer determines her mood. To some, she looks sad. To others, she looks amused.

Leonardo was especially fond of Mona Lisa and kept the painting with him even though he, like many other of his works, never finished it.

The works of Michelangelo and Leonardo inspired Raffaello Sanzio, who was born in 1483. Unlike his moody contemporaries, Raffaello was gracious, good mannered, and charming. The artist never lacked influential patrons, who commissioned him series of the Madonna and the Child.

He was chief architect of Saint Peter’s Basilica in the Vatican. Raffaello was also the director of excavations for the ancient Greek and Roman relics buried in Rome. He designed ten tapestries for the Sistine Chapel. Furthermore, he painted four of the frescos in the Vatican. The most famous one is the School of Athens. Unfortunately, his glorious career was short. In fact, he died only at 37.

The School of Athens

Raphael’s School of Athens shows his upbeat, jovial personality. Everything about the composition reflects the ideas of Italian art in the Renaissance. The subjects of the painting are actively discussing, reading, and writing. This detailed piece showcases concepts of beauty, naturalistic expression, perfection, and noble principles. These same principles are carried over to his other famous work, the Sistine Madonna.

The Sistine Madonna depicts the Virgin Mary holding a small Jesus, standing above two cherubs. The expressions on the faces of the Madonna and Child have left art historians wondering.

Usually, in paintings with this subject matter, the Virgin Mary has a s serene and unconcerned expression. While baby Jesus looks confident, smiling even. But Raffaello’s work is different. In fact, his Mary looks worried and fitful. She looks like any other mother, concerned for the child. The young Jesus also looks worried. Both figures look straight at the viewer. For the first time in art history, Mary and Jesus have true emotional gravity. It’s the portrait of Raffaello’s intensity.

Michelangelo, Leonardo, and Raphael contributed the most illustrious and significant works of not only the Italian High Renaissance, but of Italy, and the world. It is through their contributions that the concepts of modern art were founded. Without their influence our understanding of the human form in art and science would have been severely limited. They revolutionized art and forever changed the way people viewed the earth around them.