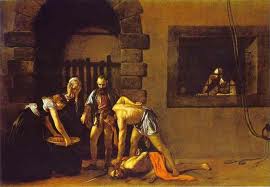 Caravaggio, or Michelangelo Merisi da Caravaggio, was born in 1571. He is considered the master of light, one of the few painters who with his brush and his strokes was able to capture the essence of light like only Mother Nature could. He was born in Milan and after a period of training in his native town he transferred to Rome, historically more of an art city than Milan, and clearly in high demand for artists and their work.

Caravaggio’s qualities are very exquisite; they bring a sense of realism through the use of chiaroscuro, playing with light and shadows, which feels almost as someone is holding a spotlight inside the paintings. This extraordinary talent allowed him to find work all the time and rapidly become one of the most appreciated artists of its time. In addition he was able to merge religious needs with the call to express feelings and scenes dictated by everyday life, not in their content, but through the actual emotions they evoked. He felt this was a truly valid subject, often emphasized by the historical of mythological topic through which such feelings were highlighted.

If compared to modern cinema, we could say that Caravaggio brought independent movies into a Hollywood world, although he kept the values high when they transferred onto his oil paintings. This was a clear break from the standards used until that moment. This led to much criticism on the validity of his work, as if too much realism was not the true purpose of art. History proved such criticism wrong and Caravaggio today is appreciated as one of the best artists who have ever lived. However, it is impossible to deny the dark side of his paintings and the introduction of very graphic and violent images, as well as the everlasting dilemma of real art versus vulgarity. The realistic elements created controversy and major skepticism in the Church. By the same token the vivid reality of the paintings brought a new way to look at art and to experience it. This was literally, socially and culturally very new, and Caravaggio often crossed the line between religious figures and dark elements of his times, like angelic virgins and prostitutes.

In a way, it is safe to say that Caravaggio’s use of light and shadow indicates internal conflict, but also a strong desire to break the customs of the past. He changed colors and moods that in his mind were too positive and more like fairy tales. He wanted to show real suffering, the dirt on the streets, the real fear in the eyes of his characters and their physical pain. Architects adopted this style, and all of that led to the beginning of the Baroque movement which, besides the arts, reshaped the actual skyline of Italy. Caravaggio changed the lingo and the ways of visually communicating, almost as if he wanted to take photographs and reveal real contemporary social problems and human weaknesses, rather than create more celebration of the ancient past. He saw a world closer to the earth, and the faces of his characters are those of simple people, who carry the burden of a difficult existence.

There is no doubt that all of his art was influenced by his bizarre lifestyle. Caravaggio was far from being a saint; he was often involved in fights and criminal behavior, to the point that he was charged with homicide for killing a young man in 1606. He avoided jail, escaping to Naples where he found a safe haven and freedom to continuing producing his art. Caravaggio seems also to have wounded an officer earlier in his life, while still in Milan. After Naples, he tried his fortune internationally on the island of Malta and eventually died at the young age of 40 in a still-mysterious manner. His death, mysterious as it was, is the least important part of Caravaggio’s life; his art tells us everything we need to know.