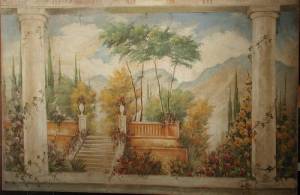 Our fast paced commercialized world has left us over stimulated and exhausted. The effect can even be seen in the type of art we surround ourselves with. Popular art today are vibrant, chaotic, displays of color and line. Many modern works are loud and brazen compositions designed to tickle the eyes and stimulate the already overworked senses. At the same time art is being hastily or mass produced and any assortment of found objects glued together and painted could very well make its way into a museum. It has at times, even become difficult to determine if an object or painting is art in the first place. It is a wonder then, with all this influx of “fast-food” style art that the laborious techniques of Fresco have survived at all.

The earliest recorded frescos date back 30,000 years ago to the hauvet cave in France. The art of fresco has survived ever since, gaining and waning in popularity as times change. Fresco became a focus of attention in the art world during the Italian Renaissance. The most notable fresco in this time period has to be those painted on the Sistine Chapel by Michelangelo. However, Italy is rich with fresco art.

The frescoes of the Brancacci Chapel in the church Santa Maria del Carmine in Florence were began in 1424. They were created by combined works of two artists, Masaccio and Masolino, with restoration work later by Filippino Lippi, who also completed the cycle.

Fifteenth century frescos are by Donatello, Mantegna, Bellini, Pisanello and the greatest of all, Giotto.

The Basilica on Piazza del Capitolo houses beautiful frescoes from the twelve century in the Cripta degli Scavi.

The amazing thirteenth century frescoes in the Parma Baptistery were painted by an anonymous Byzantine-influenced artist. Nearby in Parma one can see frescoes by Correggio in San Giovanni Evangelista and in the Camera di Correggio.

The Oratorio de San Giuseppe is home to fourteenth century frescoes portraying the “Crucifixion” and “The Life of St. John the Baptist.”

The Santa Croce in Florence features frescoes by Taddeo Gaddi, Angelo Gaddi, Giotto, and others and was the final resting place for many of Italy’s prominent inhabitants.

In Florence the Cappella dei Magi sees many visitors each year for its inspirational three-panel fresco cycle by Benozzo Gozzoli.

Frescoes by Fra Angelico in the Chiostro di Sant’Antonino depict the “Annunciation” and are considered one of the finest portrayals of the subject in Western art.

As a testament to the durability of fresco, frescoes in the Villa dei Misteri in Pompei are not only still in existence, but are beautifully preserved and impressively modern for their age.

There are many other fine examples of fresco in Italy. A person can barely turn a corner without being exposed to the long history of fresco in art. The fresco’s popularity declined after the Renaissance until being revived in the 20th century by Mexican painters. These frescoes do not display the degree of technique as was shown by the Italian artists, but are also quite nice. For a while fresco was laid to the side because of its susceptibility to humidity. Fresco is now enjoying a renewal of interest due to the restoration of the Sistine Chapel in the 1980’s. With climate control available in almost every home and the wonders of modern shipping technology, many people are discovering for the first time the enjoyment of owning a fresco painting. Frescoes today can be made in the traditional manner, removed from the wall, and shipped world wide (see www.frescoarte.com for more info).

Fresco is much more than a painting technique. It is an exercise in patience, diligence, and skill. A large fresco can take weeks to complete as each and every layer must be handled with special care. Unlike an oil painting fresco encompasses many steps. From preparing the mortar, laying down the rough coat, covering it with a painting coat, smoothing the painting coat, preparing the pigments, transferring the design, and applying the pigment each and every step must be planned ahead of time. There is no room for mistake in fresco. A misplaced line or poor color choice can lead to that section of the fresco being destroyed and the whole process being started all over again. For more information on fresco technique go to (a Life in Italy sponsor) Italian fresco . Fresco artists practice their technique for years before their work fully blooms. Considering the hours of preparation and painting, and the unforgiving nature of the art itself, it is a wonder that any artist would choose this method as a means of expression. Fresco is indeed a labor of love.

After the intense labor is over and the fresco is complete we can fully appreciate the beauty of a fresco. The colors used in fresco are subdued and gentle because they are imbedded in the plaster. Because of this, frescoes can last for generations, making them wonderful heirloom pieces. Fresco is art on two levels. The actual images painted on a fresco may vary, but each will have its own sense of movement and texture as dictated by the subject matter. The fresco itself will also have an individual feel of movement and texture given to it from the underlying plaster. Like fingerprints, no two frescoes, no matter how similar, can ever be alike. Each one has its own individual personality, texture, and feel. Each one is alive with passion of the artist that created it. For example take the veduta con giardino by Sergio Bonometti : pictures can not show the inherent beauty in this fresco. In this photo this fresco looks suspiciously like an oil painting. You can see the light below clouds, the delicate greenery, the willowy branches and winding vines, the fragrant blossoms, and strong majestic columns. But, what you can’t see is how these elements interact with the texture of the plaster. You can’t see how the colors blend from stroke to stroke, or how the natural peaks and flats of the plaster create a play of light and shadow. These things can only be experienced in person.