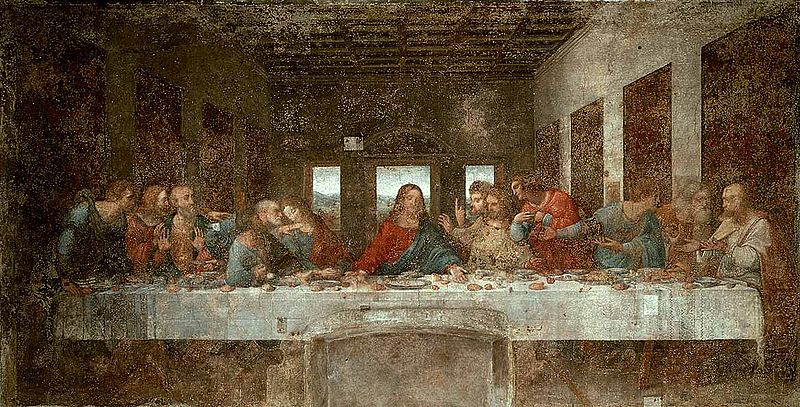 Among religious subjects, The Last Supper has been a favorite inspiration for many works of art, and numerous are the great masters who addressed this theme in some of their best known masterpieces. As far back as in the times of the early Christians, there were pictorial representations of the meal that could be found in the catacombs of Rome. These representations gave an idea of the atmosphere that existed in an ancient dining hall. A later representation is to be found in a bas-relief in the church at Monza in Italy that dates from the sixth century. There is also a pictorial representation in a Syrian codex in the Laurentian Library at Florence, as well as a mosaic representation of The Last Supper in the church of S. Apollinare Nuovo at Ravenna, Italy. Among the masters of the modern school of German artists, the Last Supper of Gebhardt is regarded as a masterpiece.

Of course, by far the most famous ‘Last Supper‘ interpretation belongs to Leonardo da Vinci. Other outstanding masterpieces were executed by Tintoretto, Veronese and Ghirlandaio. However, Da Vinci’s Last Supper has become one of the most widely known and appreciated masterpieces in the world. It began to acquire its unique reputation immediately after it was finished in 1498, and its prestige has continued to grow. Despite the many changes that have taken place over the centuries in tastes, artistic styles, as well as the physical deterioration of the painting itself, the painting’s status as an extraordinary creation has never been questioned nor doubted. The outstanding features of this work reflect not only the highly artistic merits of the painting, but also Leonardo’s expressive mastery. Leonardo’s Last Supper is an ideal pictorial representation of the most important event in the Christian doctrine of salvation – the institution of the Eucharist. His representation of this part of the Christian doctrine has achieved unanimous acceptance and authority. There are countless copies and reproductions of this particular painting in homes, places of worship, and museums throughout the world. When thoughts turn to the Last Supper, it seems that Leonardo’s representation is the one that comes most easily to mind.

The painting has also been subject to much attention due to the number of restorations it has had to undergo since its completion in the fifteenth century. The most recent restoration lasted twenty years and has been the subject of much controversy. One of the most frequent pungent criticisms leveled at this influential painting is that it has been “repainted” rather than “restored”. However, clearly restoration has continued to be an ongoing necessity for this masterpiece due to the unprecedented manner in which Leonardo painted it (details of the technique below). Although restoration may have altered Leonardo’s painting to a degree, it has prolonged its life to allow the viewing by future generations.

The Last Supper (in Italian, Il Cenacolo or La Ultima Cena) was painted by Leonardo da Vinci for his patron Duke Lodovico Sforza. Leonardo worked for Ludovico Sforza, Duke of Milan for nearly eighteen years (1482-99), and so he was motivated not only by the religious theme of the painting but also by the wishes and desires of his patron who compensated him financially for his work.

As is well known, the painting represents the scene of the Last Supper from the final days of the life of Jesus Christ as recounted in the Christian Bible. The painting is based on John 13:21, in which Jesus announced that one of his disciples would betray him. As chronicled in the Gospel, the evening before Christ was betrayed by one of his disciples, he gathered them together for a meal during which he told them of the events that would follow. During the meal they took bread and wine together, and Christ gave the disciples instructions on how to remember him through the performance of this ritual, that was the first celebration of the Eucharist. Specifically, the Last Supper depicts the immediate moments after Christ announced that one disciple would betray him before sunrise, and all twelve are reacting to the news with different degrees of horror, anger and shock. The individual figures in the painting, moving from left to right, are firstly Bartholomew, James Minor and Andrew who are all shocked and aghast by the news given to them by Christ. In the next group of three are Judas, Peter and John. Judas may be identified by the small bag that he holds, possibly representing the silver received in payment for the betrayal, and his face is in shadow. In the center, Christ is calm in clear contrast to the agitation among the disciples surrounding him. The next group is comprised of Thomas, James Major and Philip, who are agitated at the news of the betrayal. Finally, Matthew, Thaddeus and Simon comprise the last group of distressed disciples.

One of the innovative features of the painting is that the disciples are represented as real life persons, with very earthy characteristics. Religious representations until then had an aura of “other-worldliness” that had very little in common with the lives and emotions of the peoples of the times. The other major innovation in the painting is the knowing use that is made of perspective to highlight and reinforce the image and message of the painting. All of the elements of the composition direct the viewer’s attention to the central point, or focus, of the work, Christ.

One curious aspect about the figure of Christ is that he has no feet. In fact the painting originally portrayed Christ with feet, but during the mid-1600s building works led to the opening a door exactly in the spot of Christ’s feet that were lost in the process.

The work measures 460 x 880 cm and is located in the Convent of Santa Maria delle Grazie in Milan, Italy. Leonardo began work on The Last Supper in 1495 and completed this monumental masterpiece in only three years in 1498, an amazing accomplishment also in the light of Leonardo’s tendency to be involved in several projects simultaneously and thus to delay or even leave some of his works unfinished.

The Last Supper is not a true fresco because Leonardo painted it on a dry wall rather than on wet plaster. Because of this aspect of the method used, the piece has not withstood time very well: within 20 years of completion it already began showing signs of deterioration. However, while the painted plaster tended to flake, Leonardo’s innovation resulted in the use of a wider range of colors than available under traditional fresco techniques. The painting has undergone significant restoration since the 16th century. Because of this it is uncertain whether the faces still resemble Leonardo’s original representations.

It is legend that the model for the figure of Christ was a young man in the choir that Leonardo saw while at mass in the cathedral. The young man had all the features of kindness and goodness that were needed to inspire the representation of the figure of Christ. However, Leonardo was unable to complete the painting because he could not find someone suitable to sit as model for Judas, and many years went by. Leonardo was seeking a model with features that would exemplify sin and greed, and also despair. About ten years later, Leonardo found a model with the required characteristics for the figure of Judas. This man was a prisoner in jail, but he was allowed to sit as the model. The legend says that after a period the wretched man wept and confessed to Leonardo that he was the same person who had sat as model for the figure of Christ, but that he had lived a life of sin and degradation which was reflected in the deterioration of his physical appearance.

Although it represents an interesting variation on the theme of artistic creation, this legend appears to have very little factual basis. Historic reconstruction indicates that the fresco was completed in 1498 after 3 years of work. Moreover, in 1499 Leonardo had to leave Milan because of the French invasion, and he did not return to the city until 7 years later. The legend thus seems more of a religious warning about the dangers of sin and absence of Christian values.

As an image, The Last Supper has been put on everything from mirrors, to mouse pads, to musical pillows. If Leonardo were still around, he’d be earning billions on licensing fees alone.

More on The last supper fresco .