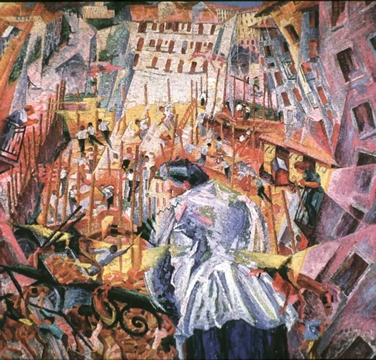 Futurism in Italy began as a literary movement. And with the manifesto of Filippo Tomaso Marinetti in 1908. Here’s our guide to the movement.

In his manifesto, Marinetti called for the destruction of public establishments, such as libraries, museums, academies, and the cities themselves. Young intellectuals flocked to the heels of his radical ideologies.

The beginnings of futurism in Italy

That was the beginning of a new, artistic movement. Its representatives wanted to bring anarchy to Italian culture. With the goal of revitalizing something that was stagnant. Futurism worshipped modern technology. To them, technology had to pervade every aspect of human life.

Furthermore, the movement denounced the cultural heritage of Italy and all previous classical artistic movements. In Futurism, the speed and the glories of the machine would be fully realized in art. Thanks to the use of quasi-cubanistic angular lines, loud brazen colors, and frenzied brushstrokes.

Futurism pushed Italian art into the modern realm with its literary theories.

The names and protagonists

So, who were these artists, sweeping through the country?

Umberto Boccioni stood at the forefront of Futurism in Italy. He was born in 1882 near Calabria. While he didn’t start as a Futurist, he became one. In fact, the artist started as a sign painter, when he moved to Rome in 1901. He studied at the Scuola Libera del Nudo at the Accademia di Belle Arti until 1902. That year, Boccioni traveled to Paris to study Impressionist and Post-Impressionist. After touring Russia, Padua and Venice, Boccioni settled in Milan.

In Milan, he became active in the Futuristic movement. Boccioni helped Filippo Tomaso Marinetti prepare two of his 1910 manifestos. He was fascinated by the radical ideas. And inspired. So much so that he began his series of paintings dedicated to depicting the ideas of the Futuristic movement. For example, his 1911 series depicted the railroad farewells, States of Mind. It was a symbol, representing the clash between human emotion and the automatism of the machine.

In The Farewells, human figures in desperate embraces are swallowed up by the almost audible confusion of machine renderings. Sharp cubanistic lines clamor dark and angry in the image, almost lifting themselves out of the page to assault the viewer. Boccioni published his first text, Futurist Painting and Sculpture, in 1914. Two years later, he joined the army where he died tragically in a Calvary training exercise.

Carra’ was born in Piedmont in 1881. At first, he followed his father’s footstep as a muralist and decorator. Carrà studied with Boccioni at the Brera Academy in Milan. Their interaction (and later with Luigi Russolo) transformed his impressionistic style into its eventual form. Hence, in Futurism.

Carrà published several manifestos, the most notable is The Painting of Sounds, Noises and Smells, written in 1913. Later on, Boccioni and him fell out over a difference in theology.

Their differences are obvious in Carrà’s work the Anarchist’s Funeral. This painting depicts the police intervention of Angelo Galli’s, and anarchist activist funeral, in 1904. Carra’ illustrates the brutal attack on the mourners. In this work, frenzied brushstrokes combine with pointillist techniques. And though the choice of color and line are reminiscent of Boccioni’s art, this work shows the separation of Carrà. The separation from the Futuristic movement. In fact, he chose metaphysical painting. His later work aimed to lift the spirits of the viewers.

Luigi Russolo’s love affair with Futurism in Italy was also short. He was born from a musical family in 1885. So, he started off his career as a musician. His father was the director of the Schola Cantorum at Latisana and the local cathedral organist. Russolo tried his hand at Futuristic painting, but was not satisfied with its results.

He instead turned his focus towards Futuristic music and the creation of music out of noise. In 1913 he published his manifesto Art of Noises which described his belief. The belief that noise was the music of the twentieth century. To achieve these noises Russolo invented the Intonorumi, or noise machines. They were acoustic sound generators which produced the mechanical noises of his manifesto. Later Russolo suffered from a head injury. This incident prevented him from from Intonorumi concerts.

Instead, he spent his remaining days inventing experimental musical instruments. These instruments combined the principles of his noise machines with the operations of primitive keyboards. However, they didn’t become popular. In fact, the plans for mass productions were cut short. So Russolo returned to the quite contemplation of painting. He chose a realist style. Until his death in 1947.

The birth of Futurism in Italy comes from the desire of rearranging cultural values around technology and the machine ethic. Although the art is longer gone, its principles still reflect in movies and daily customs. The more people rely on technology, the more people are living the Futuristic dream. As the artists predicted long ago, machines can fulfill their inherent potential.