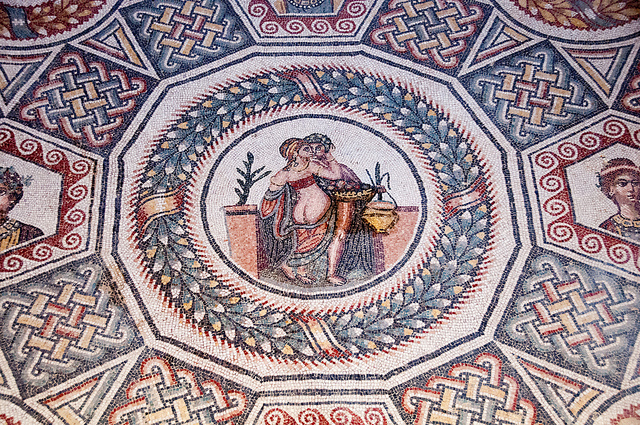 The method by which mosaics are made hasn’t changed much since ancient times. Advancements in tools and materials have made the process easier, quicker, and the results more varied and visually appealing, but over all the process is the same. There are few written records of early mosaic techniques. The most comprehensive information regarding the creation of mosaic art was written around 77 A.D. by Pliny the Elder, a roman officer and encyclopedic. In the 36th volume of his Natural History series Pliny describes the technique for the proper preparation of mosaic ground.

According to Pliny the preparation of mosaic ground began with a layer called the statumen. The statumen was a layer of tightly packed pebbles and rocks between three and five inches (8 to 12 cm) thick. On top of this layer was a ten inches (25 cm) of rough mortar called rudus. The rudus was comprised of three parts gravel and fragments of terracotta and one part lime. The rudus was to be covered with a layer of mortar called the nucleus which was also about three to five inches thick. The mortar used in the nucleus was made of three parts sand mixed with smashed tiles and bricks and one part lime. The mortar used in the nucleus was of a finer grade than that used in the rudus. The design was inscribed into the nucleus and the mosaic tiles were affixed to the top with a layer of mortar created from fine sand and lime. The lime was often colored so that the lime between the mosaic tiles would match the color of the mosaic surface.

The ideal ground as described by Pliny would have produces a thick, consistent, solid pavement. However, much of what we know about the creation of mosaic works comes from archeological evidence. Such evidence counteracts Pliny’s description of how mosaic ground was laid. Often the statum and rudus were left out. Sometimes even the nucleus was abandoned and the tiles laid directly into the fine mortar on the floor. It is most likely that Pliny was giving an example of the best method of laying mosaic ground, not the most common. Because of mosaics popularity and the time consuming and expensive nature of the work it is logical to assume that mosaic artists sometimes sacrificed steps in producing the ground to speed completion and limit cost.

Today mosaic is often created in a frame to prevent tiles from slipping or breaking off the edges. This frame can be made from various materials such as wood, metal, concrete, or resign with an aluminum core depending on the size, shape, and intended purpose of the mosaic. Mosaic tiles can then be applied to a layer of cement, clay, or mortar. Often materials like chicken wire and welded steel grilles, like those used in constructions work are used to reinforce layers.

There are two common methods of laying mosaic tile.

The first method is the direct method. The direct method is rather simple. The design is sketched into the mortar and the tiles are pressed directly into the mortar. A wooden board or level is then used to flatten out the tiles and create a smooth surface. Finally a layer of grout is spread over the tiles then wiped off, filling any spaces between the tiles. This method is optimal for small mosaics or mosaics involving a fewer, larger, tiles and curved surfaces such as domes. The obvious draw back of this method is that there is little room for mistake and repositioning tiles can be very difficult. The mosaic must also be finished very quickly before the ground dries and becomes useless.

The indirect method of laying mosaic involves laying the mosaic tiles upside down on a cloth or clay backing then applying the mortar and backing to the back of the tiles. Originally the design for the mosaic was drawn on a piece of cloth or flat of clay, the tiles were laid on the cloth or clay in the accordance to the design, and a layer of mortar was spread over the back of the tiles. Then the backing was applied to the tiles and the design was flipped over and grouted. Now artists have the benefit of being able to use plasticine to position the tiles on. The indirect method is optimal for large areas, wall applications, and compositions comprised of many small tiles. The draw back of the indirect method is the possibility of tiles shifting in the process. These tiles are nearly impossible to realign once they are applied to the base.

There are several techniques or systems for laying mosaic tesserae (tiles) that influence the final look of a mosaic piece. The three most prominent techniques are Opus tesselatum, Opus sectile, and Opus vermiculatum. Opus tesselatum used black and white cubed tesserae ranging in size from 3/16th to 1 1/8th inches (5 to 3 cm) which were often placed in a geometric formation. Opus sectile is more of a paving technique than a mosaic technique and uses larger slabs of marble called crustae to form geometric patterns, animal and floral motifs. Opus vermiculatum uses very small tesserae under 3/16th inch (.5 cm) cut to exacting shape and laid closely together to form outlined drawings and subtle shading within the mosaic design.

There are other mosaic systems used for various applications.

These are as follows:

Opus lapili: The earliest example of mosaic in which pebbles were used by binding them with compacted earth or a mixture of sand and lime.

Opus musivum: The name given to wall mosaics which use only glass paste tesserae.

Opus quadratum: Tesserae in the shape of a parallelepiped (three dimensional rectangle) arranged in horizontal rows to achieve a checkered effect.

Opus reticulatum: Tesserae in the shape of a parallelepiped (three dimensional rectangle) arranged in horizontal rows to achieve a checkered effect.

Opus segmentatum: A mix of small and large tesserae creating a geometric pattern. Derives from a paving technique in which spare bricks were interspersed with shiny stones.

Opus signinum: Tesserae placed with space between them, in a geometric pattern, on a smooth pavement base made of powdered brick and lime.

Mosaic tiles are cut in much the same way they were generations ago (*** This is the method we use). The world “cut” is a bit misleading. Mosaic tiles are not so much cut as they are broken into shape. The goal is to control the fracture of the tile in such a way as to achieve the right shape and appearance. The initial shape of the tesserae is made from breaking the mosaic tiles with a hammer and anvil (also called a hardie.) Further shaping of the tiles is done with chisels and stone files. Modern tools for cutting include tile nippers, table saws, glass cutters and tweezers. Though these tools have improved the ability to shape the tiles, they do not speed the process by much and there is no cost effective way to mass produce mosaic tiles for specific applications. They do allow mosaic artists to use tile shapes not commonly seen in ancient mosaic works such as circles and arches. More often than not mosaic tiles are still cut by hand without the use of machinery to insure a proper fit and correct shape.

Ancient tools aren’t the only things that have survived in modern day mosaic making. Many of the same materials used in ancient mosaics are used today. Stone and rock are still common mosaic material, along with marble, terracotta, and glass paste. Glass paste, or smalti as it is called, was a favorite material during the Byzantine era.

Smalti is made from silica, lime, soda and potash, alumina, magnesia, lead oxide, boric acid, and phosphoric acid. It is colored with metal oxides such as cobalt, copper, chrome, uranium, nickel, iron, silver, and manganese dioxide. These materials are ground to a powder and melted. The melted material is then poured to create sheets of opaque glass in a great variety of colors. This glass is more stable than typical glass, easier to cut and more durable. Gold smalti, which was incredibly popular in the Byzantine era, is made by placing thin sheets of gold leaf in-between layers of clear smalti.

New materials to arrive on the scene aren’t necessarily new; they just took a while longer to become popular. Semi precious stones are sometimes seen in mosaics, but have limited use because of the difficulty involved in cutting them. Ceramic tiles in various colors are used in mosaic as well as broken pieces of decorative china, and enameled ceramic tiles. Murano, millefiori, and iridescent glass are also used in the creation of mosaic works.

If speed of execution and color is a concern mosaics can also be made from pre-made tesserae and glass tiles. Millefiori is a type of Murano glass made by combining many colored glass canes together, then heating and stretching them to create rods of glass which can be sliced. Each slice has its own mini mosaic design in it. Millefiori is also a popular material for making jewelry pendants.

Most of the materials considered “new” to mosaic work have existed since the height of mosaic popularity, but were not commonly used because of the difficulty in cutting them or the expense in producing them.

Today’s mosaic artists employ many of the same techniques used by ancient mosaic artists. Indeed, mosaic has changed little over the centuries. Innovations in materials have allowed artists to make mosaics in any static form along with flexible mosaics that can be repositioned anywhere. Mosaics today are far more versatile than their antique counterparts and somewhat more durable, but the process by which mosaics are created, and the time it takes to produce a mosaic has remained the same.