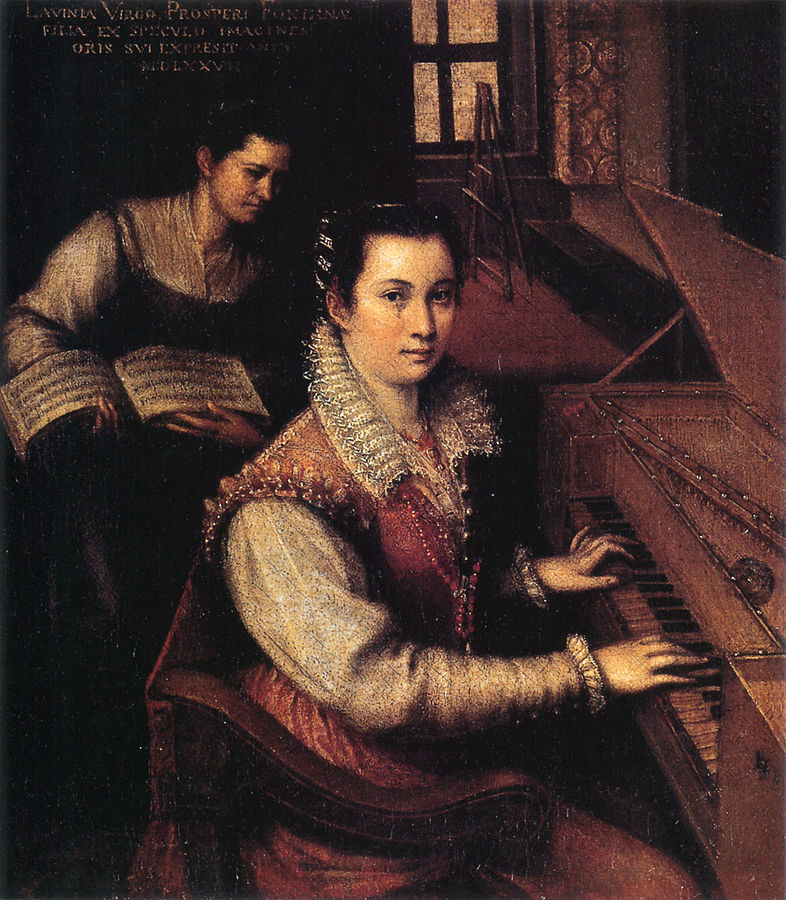 Lavinia Fontana was born in 1552 in Bologna. Her father, Prospero Fontana, was an accomplished Mannerist painter who trained his daughter diligently in the arts. It was fortunate that Fontana was born in Bologna. At the time of her birth Bologna was a cultural epicenter of art and academics not only for men, but for women as well.

Through her father’s teachings Lavinia developed a talent for painting elongated graceful figures common in Mannerism. This combined with the Flemish attention to detail in clothing and jewelry made Lavinia the favorite portraitist of Bolognese noblewomen.

At the age of 25, with her career steadily building, Lavinia married Gian Paolo Zappie, a wealthy painter from a noble family. During their marriage she bore 11 children, but continued to paint. Zappie, realizing the extent of his wife’s talent in comparison to his own resigned himself to caring for the children and managing the family finances. He often assisted his wife with her never ending stream of clients by painting backgrounds in her portraits.

By the 1570’s Lavinia’s reputation as a painter had grown past mere portrait painting in Bologna. By 1589 Lavinia was being commissioned for large religious works, the first of which was an altarpiece created for the church of the Spanish royal palace, entitled Holy Family. Because altarpieces required study of the nude figure, it was very rare that women were ever contracted to paint them. But, Lavinia’s talents were so considerable that not only was she contracted to do one for the Spanish royal palace, but for the church of Santa Sabina in Rome as well. Meanwhile Lavinia branched out into large publicly commissioned works with religious and mythological subject matter.

It was her work in Rome that opened a whole new field of patrons to Fontana. In 1603 Lavinia moved permanently to Rome and was asked by Pope Clement VIII to become an official painter to the papal court. Lavinia continued to paint religious commissions and portraits during the remainder of her career. She was awarded with many honors over the course of her life including a bronze portrait medallion cast in 1611 by the sculptor and architect Felice Antonio Casoni. Lavinia Fontana is considered the first woman in Western Europe to establish a painting career on par with her male counterparts outside of a court or convent. Nearly 100 works have been attributed to her, with thirty signed pieces surviving to this day.

Fede Galizia was born in 1578 in Milan. Her father Nunzio Galizia was a painter and miniaturist and Fede probably received her early training from him. By 1590 Fede had become obsessed with recreating the works of great artists. Her paintings were mentioned in the memoirs of Giovanni P. Lomazzo, who was particularly impressed by her talents. Fede was somewhat of a child prodigy. At age 16 she was already an established portrait painter handling many commissioned works. Perhaps it was her father’s influence as a miniaturist that led to Fede’s attention to detail in her portraits. Her treatment of jewels and clothing made her a very desirable portrait painter. She was often commissioned to paint religious and secular themes as well, and there are several versions of her Judith and Holofernes that have survived in private collections. She also did miniatures and altarpieces for convents.

When not painting portraits Fede was primarily interested in painting still lifes. At the time of her work still life paintings were fairly uncommon. Those that did exist were lavish and fussy displays of wealth. Most relied on background objects outside of the main composition to give the image depth and gravity. Fede’s still life paintings were simple and elegant displays that relied on their color and form to impress the viewer. The objects in her compositions were the sole focus of her paintings. Most subjects consisted of a few pieces of delicately detailed fruit in a bowl with a piece or two lying haphazardly at the base, with some including secondary flowers, blossoms and vines.

Her paintings were deft with detail, perfectly balanced, and her attention to shadow, light, and texture was unrivalled at the time. Fede was particularly good at creating inviting space in her paintings. Her compositions are not crowded. They look as if one could reach out and touch the fruit, grasp it, and pull it from the painting without disturbing the rest of the work. Her graceful, flowing arrangements were natural and poetic unlike their contrived predecessors.

Her aesthetic treatment of still lifes would not be seen again until the middle of the century. The perception of the modern still life painting was formed entirely by the paintings of Fede Galizia. Many of the still life works we see today draw their influence from her original ideas. Currently, it is unknown just how many paintings Fede was responsible for. Many works that could have possibly been hers have been attributed to her male counterpart Panfilo Nuvolone, who drew significant inspiration from Fede. Fede passed away in Milan in 1630.

Diana Scultori Ghisi, also known as Diana Mantuana or Diana Mantovana, was a 16th century engraver. She was the first woman ever allowed to sell her prints under her own name. But, beyond being an accomplished artist, Diana, was a shrewd businesswoman. Diana was born in 1547, one of three daughters. Her father was an accomplished Mantuan engraver who was associated with the Mantuan court. It was from her father that she learned to draw and to engrave.

In 1575 Diana married Franseco de Volterra, an aspiring architect. Together they moved to Rome to build his career. In 1576 Diana approached the papal court to request the right to sell her work under her own name. She arrived with several examples of her prints and was given permission to sell her work under both the names Diana Mantuana and Diana Mantovana. Diana used her abilities as an engraver not to sell her own artwork, which would have provided little in the way of financial stability for her family, but to procure work for her husband in the form of architectural commissions. Diana even went as far as to change her name to be better associated with the Mantuan court. Never did Diana sign her work with the name Scultori or Ghisi, since neither of these names would have furthered her career.

It is often assumed that Diana was herself and accomplished artist. Though, she did show some considerable talent in drawing, most of the prints produced by Diana were derived from the works of others. By the late 1500’s engraving and publishing had become regulated trades with little outlet for artistic freedom. All texts and images were recorded to protect the ownership of the original printer and determined whether or not they were permissible for view by the public.

Texts that could be considered heretical by the church subjected their publishers to excommunication, fines, and seizure of property. Diana worked carefully within the confines of these regulations under the protection of her husband’s and father’s house to build a reputation for herself as a charming and talented female engraver.

Diana’s prints enjoyed immense popularity. Lavinia Fontana even used one of Diana’s prints as a basis for her paintings. Diana was well known for her gracious manner. Her prints often included illustrious dedications to the original artists. However, it must be understood that even though most of the original works did not spawn from Diana’s own hand, printmaking was a tedious and labor intensive process that required skill and determination, and therefore despite its commercial applications, was a legitimate art form at which Diana Sultori Ghisi was well gifted.