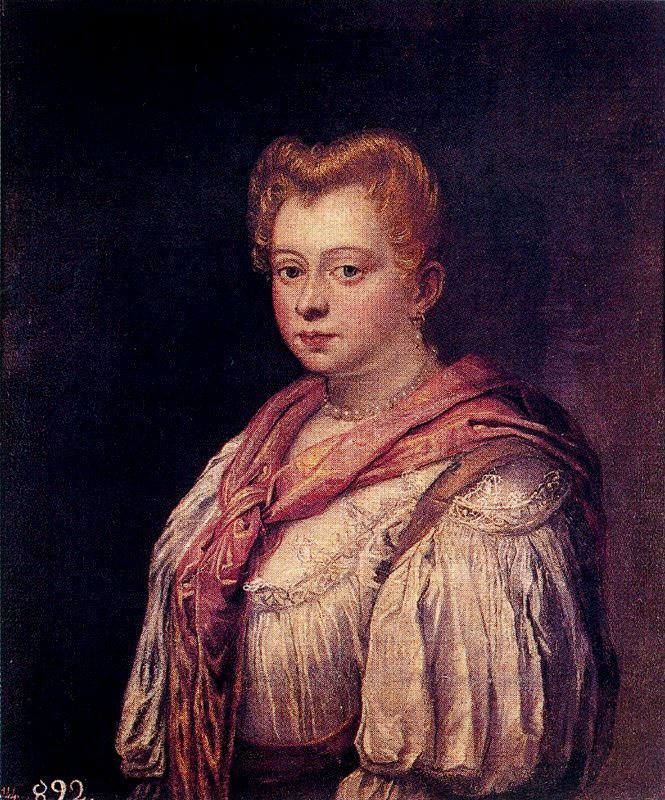 Italian women painters of the past

There are very few women artists from the past that we know of. Miss-attribution of works by women was a common phenomenon. Since women received little in the way of recognition or compensation for their work even the most talented of them often vanished into obscurity. Their lives and achievements were quickly forgotten by their male counterparts in the art world. Often women faced discrimination by other artists, and their work received little in the way of praise merely because of their sex. Because of this there are many women artists who we know virtually nothing about. Except for the most bare boned facts about their existence there are no records or writings to tell us of their contributions. Most of their works have not survived the passage of time or have been credited to other artists.

Marietta Robusti Tintoretto (also known as La Tintoretto) was born in 1560 in Venice. Her father was a famous Venetian artist who ran the Tintoretto studios. Marietta was the favorite of seven children. Her father was very attached to her and took her everywhere with him. To ensure that she received a proper artistic education Jacopo Tintoretto dressed young Marietta in boys clothing so that she would be allowed access into her father’s work area. Jacopo trained his daughter in his own artistic style. By the time she was a teenager their respective works were almost indistinguishable from each other. Marietta was also a trained singer and harpsichord player, having been privately tutored by Neapolitan Giulio Zacchino. She often played and sang for her father while he worked.

By the 1580’s Marietta’s portraits were in high demand. She was propositioned by Emperor Maximilian, Phillip II of Spain and Archduke Ferdinand to paint for their courts. Had she accepted their offers Marietta would have become quite famous, and would most likely be known by the greater population in this day and time. But, her father insisted that she stayed home with him, to work in his studio, and remain by his side. Since women were allowed little social freedom in the 1500’s Marietta had little choice but to concede to her father’s demands.

Marietta, though painting in her father’s studio for 15 years, regardless of her immense popularity and numerous commissions, was subject to the whims of her father, who refused to part with her, and was never allowed to expand her career as an artist. Jacopo relied so deeply on his daughter that he did not even permit her to marry until she was nearly thirty years old.

In 1590 Marietta married Jacopo d’ Augusta, a jeweler, who agreed to not to move Marietta from her father’s home. Four years later Marietta died during child birth. Her father never recovered from her loss.

Barbara Longhi was born in 1552. She was daughter to Luca Longhi. Only 15 of her works are known today, and of those most are small Virgin and Child paintings. She painted for the monastery of Classe in Ravenna. Her compositions were simple, relying mostly on line and color to carry the weight of the piece. Later in her career she painted mostly saintly images devoid of the incessant busyness found in Mannerist works. Her paintings were intimate and simple devotionals that were designed to instill peace and quiet reflection in the viewer. Because many of her works were left unsigned it is impossible to determine the extent of her contributions to the art world.

Giovanna Garzoni was born in 1600 in Ascoli Piceno. She primarily painted still lifes and her works were in high demand. In 1625 she produced a calligraphy book with illustrations of letters, fruit, flowers, and insects. Her preferred medium was tempra on vellum and her detailed representations of natural elements made her a favorite illustrator among aristocrats. She enjoyed a long and successful career including being hired to paint botanical and zoological specimens for the Medici Court. Her watercolors were considered the finest botanical and zoological renderings of the seventeenth century.

Properzia De Rossi was born in Bologna in 1490. She was the only female sculpture and miniaturist of the Renaissance. She received the bulk of her training from Marcantonio Raimondi, who was the engraver for Michelangelo’s paintings. She was well known for her diminutive works and admired for her amazing skill. She carved her highly detailed miniatures from the pits of cherries and peaches. She was commissioned to do miniature alter displays for convents and monasteries. Other than being an artist, Properzia was also educated in the sciences and an accomplished musician. She died early at the age of 40.