The Influences of Shakespeare and Chaucer

Before William Shakespeare and Geoffrey Chaucer, there was the man who both inspired and influenced much of their work: Giovanni Boccaccio. Boccaccio composed ground-breaking literary works during his lifetime that built the foundation for literature today. His poems and epics written in Italian and Latin became classics that would endure for hundreds of years and influence the path that literature would take in the years following his life.

Giovanni Boccaccio was born in midsummer in 1313. There are discrepancies concerning the exact place of his birth, but most historians believe Boccaccio’s birthplace was either Certaldo or Florence. Boccaccio was the illegitimate son of a wealthy Italian merchant, Boccaccino di Chellino, and was largely raised by his father. When Boccaccio was still young, his father married a noblewoman named Margherita de’ Mardoli and subsequently, Boccaccio’s half-brother, Francesco, was born. By the time Boccaccio reached his teen years, he was traveling regularly with his father on business, and in 1327, he followed his father to Naples. There he studied accounting and then canon law, and then finally decided to focus on classical and scientific studies.

From there, his interest in writing and poetry flourished, and Boccaccio became an active participant in the court of Robert d’Anjou, the king of Naples. It is believed that the king had an illegitimate daughter by the name of Maria de Conti d’Aquino, and that she became the mistress of Boccaccio. Perhaps it is Maria that became Boccaccio’s muse and inspired some of his most famed romantic lyrics in Filocolo and Filostrato, in which he spoke of a beautiful and desirable Fiammetta. 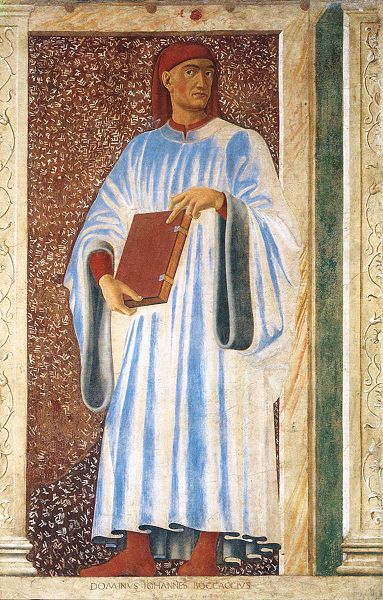 By 1340 Boccaccio felt it was time to return to Florence, and there he served the city by performing numerous diplomatic services for the local government. During this time, Boccaccio continued to compose works of literature, including Comedia Ninfe, Amorosa Visione, and Elegia di Madonna Fiammetta. In 1348, the plague spread to Florence and claimed the lives of Boccaccio’s father, step-mother, and many of his close friends. At this time, Florence and much of Europe was filled with agony over the tragedies caused by the plague, and Boccaccio found inspiration during this difficult time for one of his most famous works, Decameron.

This masterpiece transcended much of the literature of the time, combining levels of comedy and drama for a very realistic and touching effect. Decameron tells the story of ten individuals who fled the plague in Florence and traveled into the countryside. There, the group exchanged various stories from their lives to help pass the time. Decameron is said to be the primary influence for Geoffrey Chaucer’s Canterbury Tales .

Boccaccio met one of his most admired influences in 1350, Francesco Petrarca, or Francis Petrarch. The two found that they had much in common and over their lifetimes became close friends, meeting often throughout Italy. Over the next few years, Boccaccio traveled through the major cities in Italy performing diplomatic services and composing more literary works. In 1359 in Milan, Boccaccio was named ambassador to Lombardy, possibly at the court of Bernabo` Visconti.

Boccaccio became popular both in literary and diplomatic accomplishments, and he was noticed by even the most esteemed Italians. In 1360, Pope Innocent VI inducted Boccaccio into the clergy. Soon after the induction, Florence suffered much political turmoil, and many of Boccaccio’s friends were implicated and some were charged so far as to be executed. 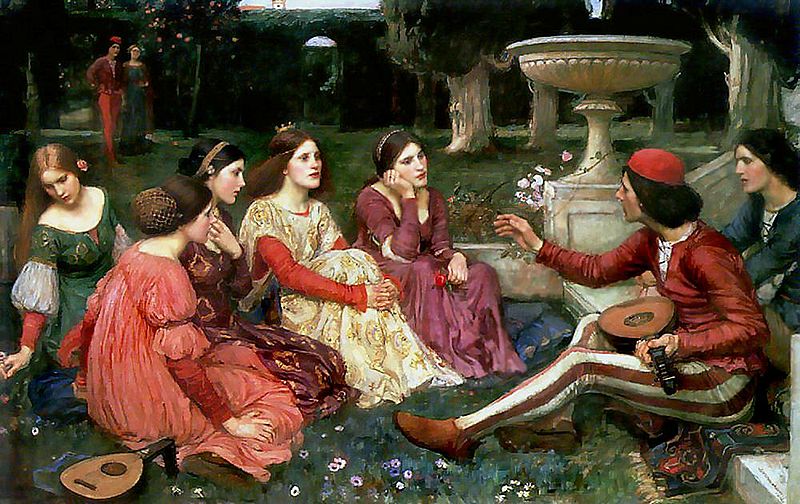 Following these controversial events, Boccaccio retreated to Certaldo and Ravenna, where he focused once again on writing. After several somewhat seclusive years, Boccaccio finally returned to the diplomatic scene in 1365 when he traveled to the papal court of Urban V in Avignon as Florentine ambassador. He continued to travel throughout Italy performing diplomatic services until 1372, when Boccaccio finally retired to Certaldo due to his weakening state of health. Obesity and frequent illnesses had greatly affected Boccaccio, and once again he put his focus into literary fields. He continued to compose new works and revise his previous ones. He proceeded to conduct a series of readings and lectures in Florence on the Divina Commedia . Learning of Petrarch’s death in 1374 led Boccaccio to compose a last sonnet of poetry. Boccaccio died on December 21, 1375 in his home in Certaldo (the house is open to public).

Giovanni Boccaccio’s literary work was quite enlightened for his time. His portrayal of women was advanced compared to that of many other writers in that age. In Decameron, seven of the ten characters were women, and Boccaccio also wrote a series of biographies devoted entirely to women, Famous Women . These works paved the way for more enlightened portrayals of women in literature. His romantic prose would continue to inspire future writers for years to come. The profound influence of the work Boccaccio can be seen in many of the famous works composed in the centuries after his lifetime.