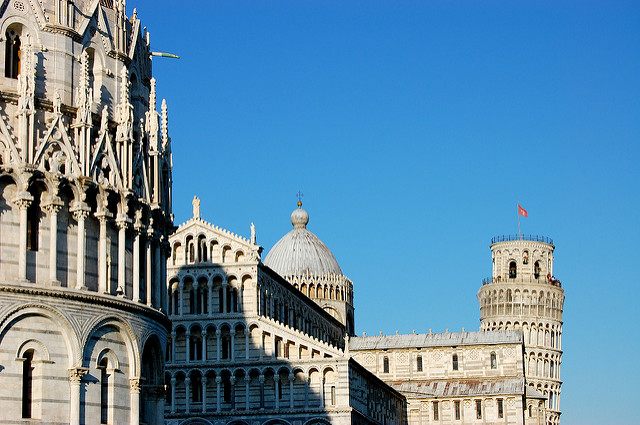 A bunch of weeks ago, one of our articles dedicated to curious facts about the Colosseum became quite popular on Lifeinitaly’s Facebook page. As it seems our readers have a keen interest in knowing more, little known facts about Italy’s most recognizable monuments, we decided to dedicate a few lines to another very popular Italian landmark, the leaning tower of Pisa.

Symbol itself of the tuscan town, the tower of Pisa has become synonym with Italian art, its peculiar inclination making it all the more interesting and curious to the millions of visitors climbing its 276 steps every year.

Who designed it? Why is it leaning? Why doesn’t it fall? And are there other structures around the globe defying gravity just as our beloved “torre”?

Read on to find out!

First of all, some essential information

“La torre di Pisa” is the belfry of the Santa Maria Assunta‘s cathedral, in Piazza dei Miracoli. The tower was built thanks to a conspicous donation of 60 gold coins from Berta di Bernardo, a wealthy pisan widow, who had declared in her will the sum was to be used for the construction of a belfry for the cathedral: it was January 1172.

Construction began on the 9th of August 1173 and was concluded only two centuries later, in 1399, because of the issues arisen from the instability of the grounds upon which it had been built. It stands 56 metres tall and weights around 14.523 tons. Its eight storeys are adorned by circular arches, recalling in style and composition those of the cathedral’s façade: of course, it comes as no suprise as “la torre” is the church’s bell tower. The building is constructed with limestone and is entirely covered in white marble, which gives it, and all the structures in Piazza dei Miracoli, an incredible, almost translucent candor.

Five years after works had begun, the first structural issues appeared, due to the instability of the soil underneath the building (more on it later). Construction halted for the good part of a century. Throughout the following decades, many architects and engineers worked on stabilizing the tower, not always with successful results, often making things even worse. It was only thanks to the works carried out throughout the 90s and early 2000s that the tower’s inclination was diminished and ultimately stopped.

The whole complex of Piazza dei Miracoli, including the tower, was developed following the Pisan Romanic architectural style, an artistic trend specifically associated to it, characterized by typically romanic elements, such as the round arch, with geometric, recurrent decorations inspired by north-african architecture, both concurring to create an impression of lightness and ascension to the skies, which was to become the trademark of gothic architecture.

This, in brief, is the history of the leaning tower. Now it’s time to take a closer look at some of the most curious facts about its construction, use and iconography.

1. We don’t know who designed it

When it comes to famous buildings, their architects are among the first people we think about. With the tower of Pisa, things get a bit complicated as we, in fact, don’t really know who originally designed it. Giorgio Vasari, art historian extraordinaire and all-around knowleadgeable man, mentioned Bonanno Pisano as its initial constructor, even underlining how he – along with a second architect, some “Guglielmo” – had little experience of the particular geological connotations of Pisa, which caused the building to lean shortly after construction began. Vasari’s opinion was shared by many art historians for a number of decades, even though not everyone agreed with him.

Another name often associated with the early years of the tower’s projectation and construction is that of Diotisalvi, architect of the Baptistery of the Piazza dei Miracoli complex. Bonanno Pisano’s name gained credibility once again in the 19th century when, during excavations in the area, archaeologists found a gravestone with his name in proximity of the tower, as well as a stone fragment bearing his name.

Truth is that, whereas art historians have plenty of information about the architects who carried out later work on the structure, the name of the person who laid its first stone remains a miystery still today.

2. Why does it lean and how are we keeping it upright?

Today, the tower leans at 3.97 degrees from its vertical axis, equal to about 4 metres. The main reason for such peculiarity is the particular geology of the area: Pisa lies on sandy, clayish land, which offers little support to structures. The first architects working on the building very likely ignored this, and failed to adapt the project to the specific condition of the land. As said, works were suspended only a handful of years after beginning for this very reason, so that architects and engineers could find a way to continue construction in safety. They realized the leaning angle of the first three storeys of the tower needed to be balanced out to make it more solid, so they built all the others curving in the opposite direction.

Specialists continued studying the tower, attempting to find a permanent solution to the problem. In the 19th century, restoration works highlighted the presence of a large underground water basin, which made the area of Piazza dei Miracoli particularly unstable; thinking to fix everything once and for all, the engineers in charge decided to drain it causing, however, a lowering of the entire soil surface, making the leaning tower of Pisa… more leaning.

Between the 1990s and 2000s, as already mentioned, the leaning angle of the tower was diminshed thanks to a series of structural interventions. Further research the tower is today, albeit still leaning, stable. Experts say it should remain so for at least another 200 years.

3. The dark past of its bells

As every belfry in the world, “la torre di Pisa” hosts a choir of bells. One of them, though, is not quite simply associated with the festive sound of religious commemorations and rituals. The San Ranieri bell (the choir’s D) had the creepy duty to ring whenever a traitor of the city was about to be executed. Legend says it rang also when Count Ugolino della Gherardesca (of Dantean fame) was locked in a cell with his children and left to die of hunger. Popular interpretations of Ugolino’s words in Dante’s Inferno want the count to have devoured his children to avoid starvation.

4. Dangers of the War

It is said that “la torre” risked to be destroyed during the Allies’ bombings of the city, in the Summer of 1944. The Germans had built an observatory on its top, making it a crucial target to eliminate. History tells us the destruction of a piece of art to get rid of the Nazis wasn’t that uncommon, as the razing of the Abbey of Montecassino demonstrates. Apparently, the building was saved by the blinding reverberation of the sun upon its white surface, which didn’t allow the Allied pilot to properly aim at it.

5. Our beauty is no longer in the Guinness Records’ List

Up to 2007, the tower of Pisa held the Guiness Record for the most leaning building in the world, whose inclination was not man-made. However, a belfry in the Frisian town of Suurhusen, on the german-dutch border, took the first spot of the popular list about a decade ago. Olaf Kuchenbecker, the Guinness Record’s spokeperson for Germany, explained the 15th century building has an inclination of 5.07 degrees, against the 3.97 of the “torre”. The Suurhusen bell tower was built upon a foundation of oak beams in an attempt to give it more stability, as the entire area was characterized by the presence of a large amount of water under the soil. In spite of it, the ground underneath the belfry partially collapsed, making it lean. The structure was reinforced in the 1970s and its inclination hasn’t changed since.

One last curiosity: just as students of the Università degli Studi di Torino are told not to climb the Mole Antonelliana if they want to graduate, natives of Pisa are, apparently, not supposed to reach the top of the tower if they wish for a life filled with luck.