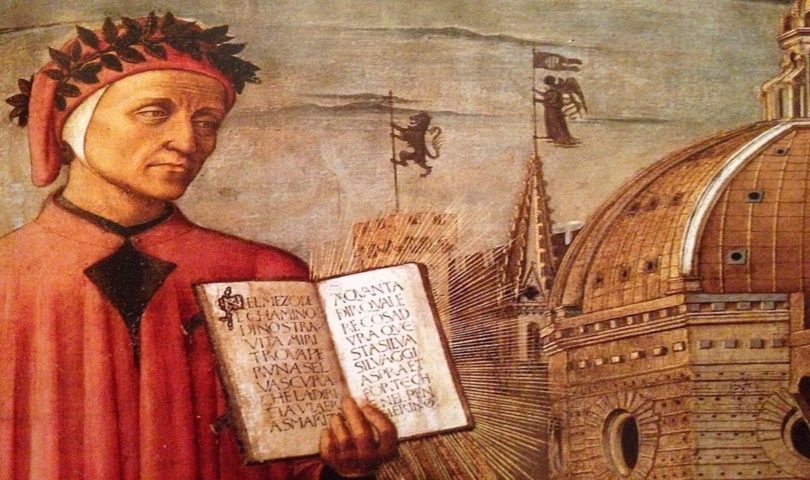 Let’s find out more about Dante Alighieri’s books and his life. Which still inspires today.

Dante Alighieri was born in 1268 in Florence, to a prestigious and powerful family. While still young his mother died. His father taught him the meaning of duty and honor, leaning on a family friend called Brunetto Latini for help. Latini was not only a famous scholar and politician. He was also a poet,  possibly an influence for yound Dante. Unfortunately, his father died in the early 1280’s. The poet was alone, except for his half-brothers and step sisters.

At 12, he met the daughter of the Portinari family. Indeed, it was Beatrice at 9 years old. He fell for her, tho he was already engaged to Gemma Donati. Beatrice was also engaged. A doomed love. While they both went their separate ways to get married, Beatrice the object of Dante’s affections. Especially in the Divine Poetry. In fact, the poet never mentions his wife Gemma.

Beatrice died in 1290 at the tender age of 24, leaving Dante alone. Gemma had left him two years after their marriage, in 1285, to remarry. Distraught, the poet began writing to his dead love’s memory. He filled pages with references to the sweet, pure love he had found with Beatrice. Now lost forever.

Dante Alighieri was involved in politics too. He fought with the Arentines at Campadino in 1289 and in 1290 was at the Fortress of Caprona. During this time he also had to fulfill many duties as were due to his family’s status. He became the superintendent of roads and road repair, a respectable position and a potentially powerful one for such a young man.

His rise to power brought enemies. Dante was a member of the White Guelph political faction . They fought constantly against the Black Guelph. In 1302 Dante found himself charged with political corruption and he was condemned to die by being burnt to death. Instead, he accepted being banned from his native city. Anyway, to him it was a severe punishment. Since he loved his city so much.

Banned from entering Florence, Dante Alighieri moved around the country. Not too long before his death in 1321, he completed the Divine Comedy. Parts of it had been revealed to the public as early as 1312, creating quite a stir among the reading audience. While many poets decided to avoid picking political sides, Dante did the opposite.

He put different living and dead figures in Heaven, Purgatory, and Hell. Needless to say, not everyone appreciated it. Surely, Beatrice would have loved it, since she was the symbol of human salvation and revelation. One of the first and best efforts at political comedy, the Divine Comedy became an immediate classic for both the religious reader and the political commentator who both found something to enjoy.

Dante Alighieri died from malaria in 1321.

An interesting story is how the final part of the Comedy, Paradise, was retrieved. Dante had died of malaria and his sons were looking for the manuscript with little success. Dante supposedly appeared to Pietro, his son, in a dream and detailed where to find these final writings. They were hidden behind on a wall in a house where Dante had lived. Pietro raced to the house, where he found the manuscript.

Dante Alighieri’s Divine Comedy is an enlightening view into the political and spiritual time that the author lived in. But it’s also a reflection of his belief in true love and of his ability to put that down on paper. Whether you read it for the political jibes or the breathtaking descriptions of the Circles of Hell or the beauty of Paradise, this famous work is a must-read for everyone.