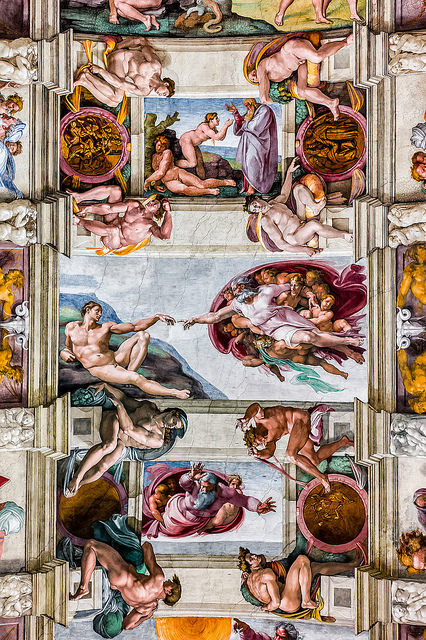 Symbol of Rome, of the Vatican and of the Renaissance, the Sistine Chapel is without a doubt one of our capital’s most beautiful treasures. Known for being one of Michelangelo’s masterpieces and for hosting in secrecy and mystery papal elections – it’s called “conclave,” for those not into Vatican news! – the chapel’s history is full of anecdotes, curiosities and extraordinary events: if it were a person, the Sistine Chapel would have some extraordinary tales for us to tell.

There are plenty of things the wider public may not know about this beautiful and holy place so we at lifeinitaly, following up on the steps of other two popular articles on curious facts about the Colosseum and the leaning tower of Pisa, decided to offer our readers some tasty morcels of history and trivia related to Rome’s own – possibly – most iconic chapel.

1. Michelangelo is not the only artist who painted the Sistine Chapel

Michelangelo began working on the Sistine Chapel in July 1508, with the blessing of Pope Julius II, secularly known as Giuliano della Rovere, aka the Warrior Pope or the Fearsome Pope for his military prowess. In truth, the frescoing of the Sistine Chapel had been commissioned a few years earlier, in 1481, by Pope Sixtus IV (hence the name “sistine”) to other great names of Italian painting: Perugino, Botticelli, Ghirlandaio, Cosimo Rosselli, Piermatteo d’Amelia and Pinturicchio. Works by all of them (beside Pinturicchio, whose contribution probably was limited to some figures in Perugino’s frescoes) are still blessing the chapel’s walls today. They represent the Life of Moses and the Life of Christ.

The ceiling, today occupied by Michelangelo’s own work, had been originally decorated by d’Amelia with a typically medieval theme: a blue, starry sky. The wall behind the altar, that where we these days see Michelangelo’s Last Judgement, had been blessed by the talented hand of Perugino, who had painted the Assumption of Mary.

So why were these works covered up by Michelangelo’s?

The answer is very simple: because of soil instability, the building had suffered structural damages, particularly visible in the ceiling and bottom wall, which were traversed by dangerous  – and very visible – cracks. Restoration was necessary and the paintings were, very likely, damaged, thus the necessity to fresco certain areas of the chapel anew. Julius II opted for the hand and creativity of Michelangelo Buonarroti to do it.

In 1515, Julius II’s successor, Leo X, commissioned Raffaello a series of tapestries depicting the lives of Saint Peter and Saint Paul. They were completed four years later and unfortunately looted in 1527 during the Sack of Rome.

2. The size, the shape, the paintings

The Sistine Chapel’s vault is 40 metres long and 13 metres wide: this means Michelangelo frescoed around 500 squared metres of walls, with images of the Genesis, like the creation of Man, his downfall, Noah’s Great Flood. On each side of them, Michelangelo chose to represent prophets and sibyls announcing the coming of the Messiah. Other areas are filled with Jesus’ forefathers and other images taken from the Old Testament. All in all, there are more than 300 figures painted on the Sistine Chapel’s ceiling. The famous Last Judgement was painted much later than its vault, under request in 1533 of another pope, Clement VII.

3. It was a painstakingly slow process

It took Michelangelo four years to complete the Sistine Chapel, from 1508 to 1512. You may wonder why, considering the immense talent of its author; well, Michelangelo had been, up to then, mainly a sculptor and he had never ventured in the beautiful world of fresco painting. This means he had to learn the technique and the many skills related to it, as well as investing an enormous amount of time in the study of perspective, a particularly hard work, when considering the Sistine Chapel’s vault is curved.

Add to it common issues, such as mold growth due to humidity, and the illness of Julius II, Michelangelo’s committent, and this four year long art labor begins to make perfect sense.

If you love 1960s historical drama with great Hollywood actors, you’re probably familiar with The Agony and the Ecstasy, Michelangelo’s biopic inspired by Irving Stone’s novel, with Charlton Heston in the role of the Italian painter. One of its most famous images is that of Michelangelo lying down on his back while painting the vault: so popular it became, that many believed – and still believe – it mirrored the reality of things. But no.

Michelangelo never needed to lie down to decorate the chapel’s ceiling, as he had ideated an ingenious scaffolding system, curved just like the vault. This didn’t mean, however, the process was comfortable: he was often forced to paint with his back and shoulders curved backward and with a fully extended arm, which caused him severe back pains for years.

5. Many hands, one style

500 squared metres of painted surface in four years: that’s a lot of work, we said. But did Michelangelo do it all on his own?

His entirely were the ideation of the project and the sketches upon which it was based. However, it would be non-historical to believe he completed the Sistine Chapel alone. Artists of the time used many apprentices and helpers for their larger projects: it’s almost certain that Michelangelo had others mixing pigments for him, transporting them up and down the scaffolding, and it’s possible some of the most talented among his aids realized parts of the sky sections and smaller figures.