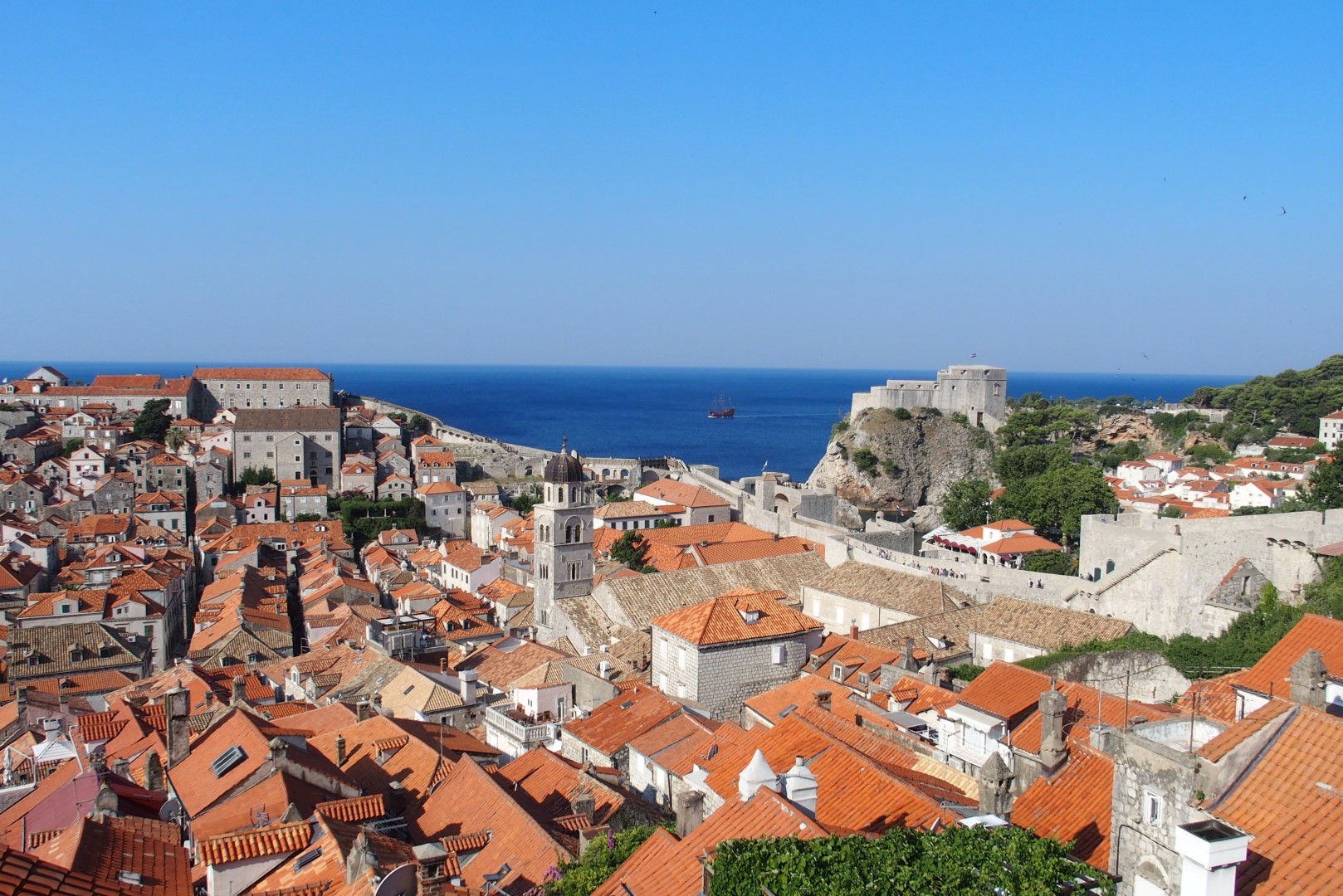 The first part of this article ( Italian cities outside Italy I ) was dedicated to famous towns and cities in Europe with Italian ties because founded by the Romans and by the Savoias, the Italian royal family. We’ve learnt about the Roman origins of London and Paris and about how a strong Savoia influence is found in the architecture and the history of places like Nice and Chambéry.

Here, we’ll focus on the vestiges of the Genoese and the Venetian hegemony  upon the Thyrrenian and the Adriatic seas, and the lands overlooking them.

The cities and towns of this article maintained an architecture and a urban planimetry fundamentally Italian in its aesthetics, to the point you may even think you are, in fact, in Italy and not in a different country. In the case of Bastia and the Principality of Monte Carlo, even the dialect may help you believe you’re in the Bel Paese, as both have strong linguistic connections to Ligurian dialects.

Genoa’s commercial and economical dominion of the Mediterranean made the Genovesi, the people of Genoa, politically powerful, especially during the late Middle Ages and the Renaissance. The Genovesi, too, have founded and influenced towns and cities outside modern Italian borders, which still bear witness to their presence and power.

Today, the Principauté de Monaco is an independent principality under the patronage of the French Republic. However, the history of this small, wealthy state is tied strictly to Italy. Even though settlements in the area were already present in pre-roman times, it was only in 1314 that a developed political entity took form, thanks to the Grimaldis, a powerful genoese family. Monaco’s Italian influence is still very much visible in the name and roots of its reigning family and in its dialect, the Monegasco, which, once again, is very similar to Genoese.

See the Italian in Monaco at

Bastia is the second largest city in Corsica. It overlooks the Tyrrhenian sea and it’s blessed with one of the most charming views: on any given day, the ihanbitants of Bastia can glance at the islands of Capraia, Montecristo and Elba. When the weather is particularly clear, they can extend their view to the Italian coast.

Bastia, as the whole of Corsica, has a very Italian history: Corsica in fact belonged for centuries to the Repubblica di Genova, whose people founded Bastia in the 14th century. Originally, the Genoese didn’t create a urban agglomeration, but rather a defensive fortress against potential enemies’ sea attacks. A village quickly grew around the fortress also thanks to the work and interest of the Grimaldis, the same family who was to create the Principality of Monte Carlo.

See the Italian in Bastia at

If Genoa held its dominion on the western part of the Mediterranean, Venice, la Serenissima, held hers on the Adriatic. Whole parts of the Croatian coast used to be under Venetian control and effectively remained Italian up to very recently: Istria was eventually annexed to Jugoslavia only at the end of the Second World War, and the coasts of Dalmatia (today part of Croatia) were controlled by the Venetians until the first quarter of the 19th century. In these areas of modern Croatia, Venetian (hence Italian) influence is still very much visible and tangible.

These areas of former Jugoslavia have flourished in the last 20 to 30 years. For those who visited for the first time in the 1970s, being back today is a pleasant surprise: dark, unkept streets then, clean and tidy town centres today. Beautiful, yet neglected monuments then, well kept, restored works of art and architecture today. The “Italian” towns and cities of the croatian coast have become, alas, cleaner, better cared for and wealthier than Italy itself. If, 40 years ago, one could feel for the people and places of this beautiful land, stuck into the bleakness and poverty of a dictatorship, today one cannot help but rejoice to the incredible renaissance these areas have undergone.

As Italians, we can only hope the same, very soon, happens to our beautiful country, too.

Poreč was itself originally founded by the Romans, a fact well visible in its structure, which is still that of a castrum romanum. Its main streets, the Decumanus and the Cardo Maximus, along with its main square, the Marafor, still bear witness to the town’s Roman origins, but it is the Venetian dominance which truly shaped it. Under the dominion of Venice, the town grew and flourished. Venice took Poreč over in 1267 and controlled it for over five centuries. Poreč, just as the whole of Istria, has been Italian until very recent times, hence the Bel Paese is still remarkably present here throughs the signs of Venetian dominance in its architecture and artistic patrimony, but also in its dialects, language and traditions. Poreč is today one of Croatia’s best known tourist destinations.

See the Italian in Poreč at

town of Hvar (Lesina in Italian) is the main urban agglomeration on the homonymous island in Dalmatia. Hvar first settlements were created by the Illyrians, enlarged by the Greek and taken over by the Roman in the 2nd century BC. It was, however, under the protectorate and then the dominance of Venice that Hvar flourished, as it became one of the Republic’s main ports. This made it a lively center, not only for trade, but also for the arts: Hvar was one of the first places to have a public theatre in Europe and became a truly refined artistic centre, all thanks to Venice.

Hvar, just as Poreč, had a very difficult history because Dalmatia – just like Istria – changed often hands after the Republic of Venice lost its dominance over the area. The Italian population of Hvar had diminished by the 19th century, but the Italian cultural influence remained strong and is still visible today, especially in the town’s architecture.

See the Italian in Hvar at

Dubrovnik or Ragusa, as it’s known in Italian, is a beautiful town of about 50.000 on the southern part of the Dalmatian coast. It was founded relatively late, in the 7th century AD, even though recent archaeological findings seem to point at a much earlier foundation, possibly even before the birth of Christ. In any case, the town gained importance in the Adriatic sea as a port and flourished under Byzantine dominion first and Venetian then. It was under Venice that Dubrovnik gained its institutions and strenghtened its position as an important portual centre in the Adriatic sea.

Contrarily to other cities and towns of the area, Dubrovnik was under Venetian influence for a short time, just over 150 years (from 1205 to 1358). It then thrived as a vassal state of the Kingdom of Hungary for almost 5 centuries. In modern times, Dubrovnik was first dominated by Napoleon, then by the Hapsburg and Nazi Germany. After the end of the Second World War, it became part of Jugoslavia and then, in 1991, of the independent state of Croatia. During the independence war, Dubrovnik suffered one of the bloodiest, most dramatic sieges Europe had witnessed since the end of WWII.

See the Italian in Dubrovnik at

As many of the towns in this article, Trogir (Traù in Italian) was founded by the Greeks, obtained relevance under the Romans and flourished and gained its modern identity as part of the Republic of Venice, of which it was part until 1797. Even after the end of the Venetian dominance, the social and political influence of Trogir’s Italian families remained undisputed. As the rest of Dalmatia, the period between the two wars was particularly eventful and Trogir, just as Fiume, was protagonist of an Italian insurrection movement lead by Count Fanfogna, which aimed at annexing it to the Bel Paese. It returned briefly to Italy during the Second World War, then became part of Jugoslavia and, finally in 1991, of the independent republic of Croatia.

Its historical centre is part of the UNESCO World Heritage Sites list since 1977.

See the Italian in Trogir at

Symbols of modern nations, of course, but there’s a bit of Italian in all these places: if anything the history and heritage of the cities and towns of this article should help us understand how the world can be a small place, indeed. Small, maybe, but truly, truly beautiful.