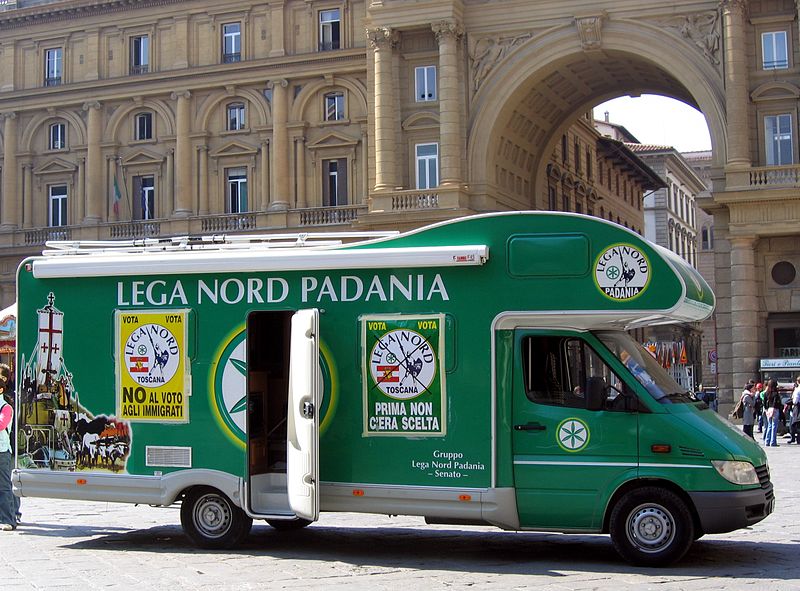 What is Lega Nord?

Italy has been one of the cradles of culture and democracy, and we, its people, believe in freedom of thought and expression more than anybody else, as far as it doesn’t hurt our fellows’ freedom and self respect.

Yet, Lega Nord (which became simply La Lega in January 2018) has been marching for decades now on the thin edge of political negligence and anti-constitutionalism.

The racist use of language typical of Lega’s style often surprises negatively our European cousins, along with its absence of tolerance towards immigrants coming from foreign countries. Truth is, however, that Lega Nord is far from being the only party in Europe founded on the same premises. Notably, the French Front Nationale and the British National Front or British National Party have similar aims and ethos.

Brief history of the South

Up to a few years ago, Lega Nord still differed from other right wing European groups because of some of its socio-political targets: if nationalists all over the world make of xenophobia their own daily bread, Lega Nord extended racial intolerance towards Italy’s own people. The first subjects of the party’s wrath were not only and exclusively immigrants, but also Southern Italians. As many of you may be aware of, the socio-economical map of Italy is very different between North and South, with the former being more prosperous and stable. Such a difference has roots as old as the State of Italy itself, if not older; historically, the South of the peninsula had always been colonial land for large European states.

Sometimes it was France, sometimes Spain, but the situation would barely change: conquering powers would exploit the land, but very little was done to ameliorate living conditions, improve the level of industrialization or help the evolution of agricultural methods.

In the North (and large chunks of the centre) on the other hand, the constant presence of the Savoias in Piedmont and Liguria, the Hapsburg in Lombardy, Veneto and Trentino, along with the stability given by the Granducate of Tuscany and the Papal State, had guaranteed relative prosperity.

The unification of Italy could have solved things

Southern Italians lay great hopes in the Italian Unification (1861). Characterized, as it may be expected, by an enormous patriotic afflatus of many, Unification was wanted by the Savoias, however, not only and exclusively because they wanted to bring under the same flag a country which had been one culturally since the times of the Romans. The Italian royal family little cared about its Southern Italian subjects, and never hid it.

The capital remained in Turin (eons away from the South) for 3 years, then Vittorio Emanuele II moved it to Florence and, after the final conquest of Rome, to today’s capital, only because forced by his advisors. The South remained poor and neglected, just as it had been.

It may seem impossible, but that neglect is the seed of the cultural, social and economical differences we still experience between the North and the South today. Add a slighly different attitude towards life in general  and you’ll get the basis of national intolerance.

The situation has changed in recent years, however: the enemy of Italy is no longer the Southern Italian, but rather the immigrant, a new exploiter of Italy’s resources and Italians’ hard earned money. With all “locals”  finally all under the same roof, the non nationals are the dark beast to fight.

Lega and its history

Lega Nord is a regionalist party founded in 1991. Despite being recently established, its history is well rooted in the past, thanks to  its links with some regionalist movements that existed in Italy more than 20 years ago.

The forerunner of this movement is Umberto Bossi, leader of the Lega Lombarda who thought, at the end of 1980’s, that a union of the several Northern regionalist movements was necessary to create a single federalist movement.

In the last few years,  Lega has been subjected to criticism and controversies due to their political thought and in-your-face attitude. However, it is important to have a general knowledge of the ideology of the movement, the reasons for its birth, and its aims.

The complete name of the party was Lega Nord per l’Indipendenza della Padania,  but it was simply referred to as Lega or Carroccio in newspapers and media. In January 2018, as mentioned, the word “Nord” and all references to federalism and Padania were dropped by party leader Matteo Salvini, with the aim of making the party more appealing nationally in view of the elections.

The term carroccio stands for an old four-wheel wagon, symbol of the town of Milan, that was given to its population by the bishop Ariberto da Intimiano. It represented the faith and union of the Milanese, and it was used by the medieval republics of Northern Italy that formed the Lombard League against the imperialist projects of Frederick I Barbarossa. The flag of the League is the Sun of the Alps, represented by six green petals positioned into a green circle with a white background.

Lega Nord’s claims for the independence of Northern Italy had ancient historical origins: the area Leghisti define Padania has always claimed to be sharply different from the rest of Italy, due to its traditional, historical and cultural background; it had also been  asserting  a right to autonomy by virtue of localism, importance of ethnicity as a nation, defense of traditional and popular culture.

Another driving force behind Lega Nord‘s ideology was a deep resentment towards Rome, as symbol of the Italian Government,  blamed for “stealing” money: hence the famous slogan, Roma ladrona (Rome, the monstrous thief). Politically, Lega Nord would accuse the Italian Government to be too centralized and not to offer enough independence to each single region.

Lega Nord in the Parliament

In that year, it joined Forza Italia, Alleanza Nazionale and the Centro Cristiano Democratico in order to form a coalition government under Berlusconi: Lega obtained five ministries in Berlusconi’s government. 1996 general elections saw the party gain a striking success with 10.1% of the votes. In that occasion, the party announced its desire to proclaim the secession of Northern Italy from the rest of the country, and to take the name of Padania.

In 2000, the party joined again Berlusconi’s coalition and in 2001 it won, as part of the coalition itself, the general elections. Another triumph came in 2008 when the fall of Romano Prodi’s government caused a call for early elections where Lega Nord gained 8.3% of the votes.

They are currently one of the four most voted parties in the country. In the last general election, in 2018, Lega Nord was the third largest party; it has formed a coalition government with 5 Star Movement, the most voted party. The so-called “Government of Change” has Matteo Salvini as Minister of the Interior and deputy Prime Minister, together with Luigi Di Maio of the M5S.

Changes at the top

Some changes have happened at the top of Lega Nord in the last decade. Umberto Bossi, the historical leader of the party, suffered a stroke and semi retired from active political life maintaining, however, the role of president of the party. Before that, his place was taken as secretary of the party (basically, the highest active position within the party itself) by Roberto Maroni, in 2012.

Since the end of 2013, young Matteo Salvini has become secretary of the Lega Nord.

The young politician has been having a huge mediatic impact and is a king of social media. In spite of his young age (b. 1974), Salvini has been a prominent member of Lega Nord for quite some time. Before becoming secretary of the party, he had served for 19 years as a representative of Lega Nord in the Milan city council, a position he abandoned once he was chosen as secretary of the party. Since 2009, he is also member of the European Parliament.

Faithful to the shock tactics of his party, Salvini has been supportive of anti-euro movements, as well as open on tv and on the net about his controversial opinions on immigration, foreign affairs and criminality.

Even if the original reasons for the birth of the Lega could be considered worthy and fair, it is important to underline that, in the course of time, its agenda has been controversial and has raised polemics and doubts: federalism or secession, alleged racism and xenophobia in primis.

As far as federalism and secession are concerned, it is not exactly clear if the members of  Lega want a mere autonomy of the Northern regions, or a real secession of Padania. However, a first important step was taken in April 2009 when a bill towards fiscal federalism was approved by the Senate.

Federalism is not, though, the real issue at stake when it comes to Lega and its policies: instigation to xenophobia and a general acceptance of racism seem to be the real worry of both national and international public opinion.

The Lega has been accused of racism in more than one occasion, especially because of its blatant intolerance of ethnic minorities. Umberto Bossi remains protagonist of unpleasant episodes: one above all, his infamous statement, made during a party rally, about the right of the Italian border security to fire upon illegal African immigrants trying to enter the country by sea.

On the international scene, Lega is particularly known because of its alleged use of racist language. In fact, it has sometimes hit the headline abroad and it has often been defined xenophobic.

It has also been denounced by the European Commission against Racism and Intolerance (ECRI) which asserted that “members of Lega Nord made a particularly intense use of racist and xenophobic propaganda”.

However, despite all the controversial aspects and episodes, the party has been gaining ground and approvals from the Italian electorate. The last elections confirmed it and Salvini is doing very well at increasing his popularity. It will also be of great interest to see if its ideology has the power and the grip to eventually change the social, geographical and political structures of the country.