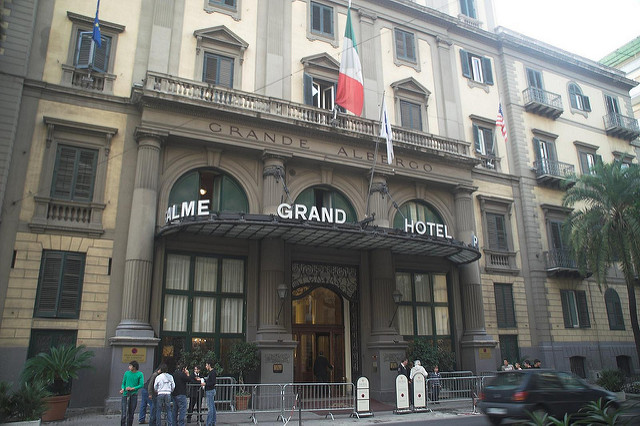 I don’t know about you, but I love spending time in hotels: the simple idea of not having to worry about cleaning around cheers me up and don’t even get me started about queen size beds and room service. I admit I don’t get the chance to stay at hotels often: when I travel I usually sleep at family and friends’, but I do end up using them quite a bit when I fly, especially when I have very early flights, in which case I rather go to the airport the evening before and stay at one of the hotels nearby. Surely, airport hotels can be comfortable and stylish, but they don’t have the same charme and allure of those smack in the centre of a historical city: their rooms may be smaller, but what they loose in space, they acquire, often, in architectural beauty, artistic wealth and, well, curious anedoctes about whom, during the decades, spent time within their walls.

Five cities in Italy, five beautiful hotels with one thing in common: a history made of luxury and illustrious customers who used them as  a place to rest, to mingle, to refresh their artistic vein, to create. Guess who slept at…

The Hotel des Bains used to be a symbol of the famous Lido di Venezia (of Mostra del Cinema di Venezia fame) and of a type of glamour and elegance that, in today’s Kardashian-esque world of crass excesses, is difficult to find. Loved by artists to the point of becoming set for pieces of literature and movies, as we shall see, its historical and artistic importance didn’t suffice to save it from being closed in 2010 to be converted in a luxury apartment complex, the construction of which however never started. Today, the sight of the Hotel des Bains, still currently disused in spite of several projects to reopen it, saddens the heart: a couple of years ago most of its original furnishing went under the hammer and  barriers keep away onlookers and curious from its grounds. Apparently, a new project proposed by a British property group could bring the Hotel des Bains back to its former glamour, but it’ll probably take at least another two years to see works begin.

The past, then, is all that remains to us of the Hotel des Bains. But what a past.

Initially built in 1900 for a well-off and aristocratic clientele, the Hotel des Bains was closed only a handful of years later because of the beginning of the First World War. During the Second World conflict, the hotel was used by the Germans as their headquarters and later, in the 1960s, it suffered severe damages due to severe floodings. Yet, it resisted. It resisted even a fire and remains alive in all its past glory in the words of Thomas Mann, who loved it so much to set his novel Death In Venice among its rooms. Mann was an habitué at the Des Bains between 1912 and 1934 and those were certainly the years of the hotel’s apogee. Home to the literary world and to the beautiful and elegant rich and famous of Europe, the grand theme parties organized at the Grand Hotel Des Bains remained in the very history of the Venice of the 20s and the 30s.

It was natural for Luchino Visconti to choose it as main set for his own cinematic rendition of Mann’s work. Even more recently, Anthony Minghella filmed a few scenes of multiple Oscar winner The English Patient  here.

Music. This is certainly what springs to mind when thinking of the Grand Hotel Et de Milan, a luxurious five star located at the heart of the historic centre of Milan. Music of a beauty difficult to describe with words, as it often happens with art.

Born as L’Albergo di Milano and inaugurated on the 23rd of May 1863, it was aesthetic mirror to the popular 19th century architectural trend of the Gothic Revival. Father of the building, the architect Andrea Pizzala, who had previously created the Galleria De Cristofori, always in Milan (no longer extant today). In the following decades, the hotel got bigger and better: it was one of the few in the city to have in-house post and telegraph services, which made it the perfect place to stay for diplomats and businessmen of the time.

The Grand Hotel Et de Milan, however, is especially tied to the figure and work of Giuseppe Verdi. Verdi loved staying here, because the hotel was conveniently located near the Teatro alla Scala and just opposite Via Bigli where a dear friend of his, countess Clara Maffei, lived. In its rooms, Verdi very likely composed part of his Othello and of his Falstaff. While staying here and frequenting the cultural salon regularly hosted by countess Maffei (Manzoni, Balzac and Rossini were habitual guests), Verdi recovered from the loss of his wife and children and, some believe, found the right inspiration for the composition of the Nabucco.

In 1902, the rooms of the Grand Hotel Et de Milan framed the making of the first recorded incision in the history of music, courtesy of the at-the-time still little known Enrico Caruso.

The building hosting the Grand Hotels Et des Palmes opened its main door in 1874, but not to guests: it was created as a lavish private home for British Marsala wine merchants Ingham and Whitaker. The two both hailed from West Yorkshire and were part of the at-the-time thriving British community living in the Sicilian capital. Partly to meet the spiritual needs of the same, Ingham and Whitaker decided to have a church – anglican, of course – built directly opposite their residence, which was connected to it through a secret underground passage.

At the beginning of the 20th century, well known Italian architect Ernesto Basile, the same who worked on the interiors of Montecitorio, house of Italy’s Camera dei Deputati, renewed the building using, in some areas, the same ornamental details (such as the carved ceilings of the Sala del Camino). But the ties of the hotel with politics go further than this: Francesco Crispi, Italian prime minister and seminal figure of Risorgimento, often stayed here enjoying notorious discussions and talks about politics within the hotel rooms and halls.

Basile’s renovation signed, for many, the beginning of the hotel’s rise to notoriety, especially among artists, but in truth the trend had already started in the 19th century. Here, Richard Wagner completed his last work, Parsifal, in 1882. His presence attracted many other creative minds: Auguste Renoir joined the German composer only a few days after he had completed his work and painted his portrait here at the hotel. Three years later, Guy de Maupassant arrived, enticed by the idea Wagner spent time here: he wrote part of his La Vie Errante, a seminal piece of Romantic travel literature, in one of the Grand Hotel’s rooms.

This stunning, elegant hotel is located in one of the Dolomites‘ most precious gems, Cortina d’Ampezzo, stomping ground for the rich and the famous of Italy and the world. It’s here that Ernest Hemingway worked on one of his most famous short stories, Out of Season, by many considered one of the author’s most experimental efforts. It became part of the collection The Fifth Column and the First Forty Nine Stories. Hemingway was inspired by his elegant surroundings and, of course, by the majesty of the Alps.

The American writer isn’t the only famous figure to have stayed at the Bellevue: the former Italian Royal family, the Savoias, were abitual guests, as well as Mussolini’s daughter, Edda Ciano Mussolini, Italo Balbo – one of Fascism’s most relevant figures – and Frank Sinatra. Great scientists like Rita Levi Montalcini and Margherita Hack would also enjoy the peace of the Dolomites here.

This hotel is probably not as fancy as the others on this list, even if it calls home one of the most elegant cities in the world, Torino. Yet, it is so deeply associated with a specific figure of Italian literature, it felt right to give it space here. If you add such figure has strong links with American literature, mentioning it became almost compulsory.

The Hotel Roma e Rocca Cavour, simply known by Turinese people as the Hotel Roma, is the place where Italian novelist and poet Cesare Pavese, who was also a keen translator of American beat literature, decided to take his life in 1950. Yes, I know: this large three star hotel located just beside Turin’s Porta Nuova train station vindicates its fame for much gloomier reasons than its glitzier companions, yet it has a long story to tell. The Hotel Roma opened its doors for the first time in 1854, when Turin was still only the capital of the Regno di Sardegna. It was, yesterday as today, entirely family run, with some of its 90 rooms still maintaining the same beautiful furnishing of those first years.

Cesare Pavese has always been one of my favorite authors and I rememberer how, as a young university student in Turin, I would sometimes take a walk to the Hotel Roma and say a Requiem Aeternam in my mind for him. What I didn’t know at the time is that the room where he took his life, number 346, is still rented out on a regular basis, but has been kept largely unaltered, even if renovations have been carried out to make all modern comforts available.

Workers at the hotel say there’s, in fact, a macabre tourism associated with the room, with many asking explicitly for it, others to visit it at least, if it’s not occupied. Nothing seems to attract people more than tragedy.

Many of the room’s fixtures, such as its telephone and a small lilac desk, are those used by Pavese on that faithful 27th of August 1950.