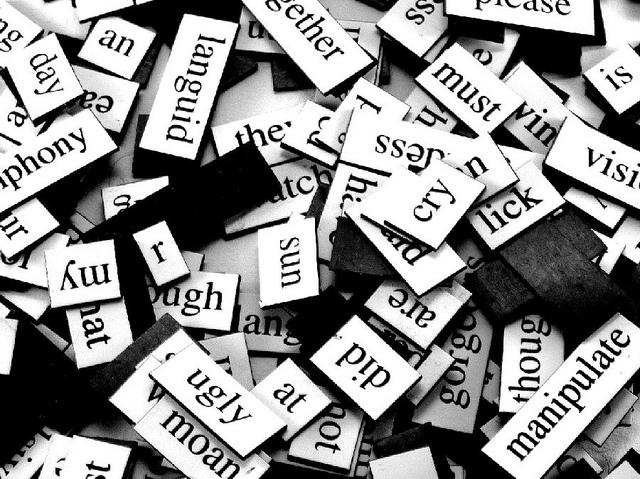 That I love the English language comes without saying: I graduated in English literature, I got both my masters degree and my doctorate writing in this language and, today, I work mostly through English. I read the news and a great deal of books in English, too, and I still speak it very much on a daily basis on the phone or Skype with my non-Italian friends.

That, when it comes to knowing English, I am far from being typically Italian, also comes without saying: the majority of us has a mediocre knowledge of the language (of any foreign language, really) and barely knows how to apply the basics of its grammar or speak it.

Even though plenty believe to be fluent, reality is the average young Italian has limited skills when it comes to communicating in English. In spite of it, the use of English borrowings has been ubiquitous in Italian since the 1980s and we all sort of got used to words such as “baby sitter,” “computer” or “shopping.” In fact, full areas of our daily lives are filled with English words: just think of techology, for instance.

Linguists, of course, have never considered the trend positively: in the end, if there are perfectly acceptable words in Italian to indicate something, why should we use a foreign one? The first to rise in defense of the purity of the Italian language was Italy’s most famous linguistic institution, the Accademia della Crusca, which has always been notoriously slow in accepting any foreign borrowing into our language current vocabulary.

So, in the end, there is really nothing new in the attacks brought upon the use of “Italianglo” (that is, English words while speaking in Italian) by Italy’s academic world: in the end, they have been doing it for the good part of 30 years now, if not longer.

Something, however, did change.

I have lived abroad for about 15 years and only returned to Italy just over 12 months ago. The use of English words in slang and current Italian was already ubiquitous when I left, but I found, upon my return, that even more English borrowing had entered our speech and that most of them appeared to be useless, as we had perfectly sound Italian words to indicate whatever the English word stood for.

Il trucco has been almost entirely substituted by make up; i fuseaux (already a French borrowing) by leggings; il tessuto scamosciato by suede; il fard by blush. I had noticed it for the first time while watching the Italian version of What not to Wear – yeah. Please don’t judge, ok?–  where the hosts would use English words even to indicate colors, shades and fabrics. Imagine my amazement when I realized that magazines followed a similar line and people were just gobbling English words down and use them as if they were Italian.

My shock was, at least initially, caused by the disappearance of Italian terms which were perfectly acceptable and normally used only a decade earlier. Beside the fact it made me feel very old (I will not bore you with the trauma of realizing, at the venerable age of 37, I am no longer a teenager…), the more I thought about it, the more it seemed to me things did not add up. Because after all those years spent in an English speaking country I knew even better than before Italy does not do foreign languages well, so it was pretty clear the increase of English borrowings was not the result of a higher linguistic proficiency of its people.

No, the majority of us remained blissfully ignorant, yet went around talking about “trade,” “meetings,” “wellness centres” and “locations” instead of commercio, riunioni, centri benessere e luoghi. According to a research conducted by Federlingue, the use of English words in Italian increased of a hefty 773% in the last 8 years. Far from trying to say the use of English in Italian is an entirely negative phenomenon, it is certainly mirror to a reality where its linguistic knowledge did not get any better, in spite of the aboundance of foreign terms used every day.

If it is true the debate is old, it had certainly been a while since it came to the attention of the wider public. We can thank Bocconi University lecturer and publicist Annamaria Testa  for having brought it back to our attention. Her views are certainly thought inducing and not only for linguists.

Testa’s opinions came to people’s attention when she indicted a change.org petition inviting Italy’s goverment, administration, media and business outlets to speak more Italian and drop the excessive use of English borrowings while communicating.

In the petition, Testa asks the direct support of the already mentioned Accademia della Crusca, the Italian institution created and developed for the protection and safeguard of our language. When the petition was launched, at the beginning of 2015, more than 25 thousand people signed it in less than 48 hours and 55 thousands within a week, showing that, in fact, many feel the same as Testa.

By the way, she has been battling in defence of the Italian language since 2000, when she published Farsi Capire (“make yourself understood”), a work already focusing on the problem.

According to Testa, the increased presence of English words in current Italian is not matched by a better knowledge of the language, but is rather caused by bad habits, rooted in “provincialism, conformism and an overall poor knoweldge of foreign languages, often used by many as a sort of ‘abracadabra’ solution to appear different from what they are,” she has said to Letizia Cini of La Nazione in February this year.

Thanks to the hashtag #dillo in italiano (say it in Italian) Testa made her campaign known in the media and created a buzz around the initiative, which was quickly embraced by many; she also presented her project officially to the Accademia della Crusca, which showed interest in her project and offered, among other things, to monitor the rise of what linguists call anglicismi incipienti, that is, “incipient anglicisms,” English words introduced by politicians, businessmen and other public figures, which could become of common use in the near future. Collaborations with representatives from the other areas of the world where Italian is an official language are also on the cards. By the way Italian is official language in Italy, Switzerland, San Marino, The Vatican, Slovenia and Croatia. “Don’t discount,” Testa says “the fact Italian is the official language of the Vatican, because this means our language is, in fact, brought around the world quite a lot.”

Of course, Testa’s aim is not eliminating foreign words from our language entirely; many have been used for decades and have been very much accepted even by the Accademia della Crusca purists. Computer, tram, blitz, abat-jour, are all foreing terms we consider naturally part of our language. The issue comes with all those foreign, English in particular, terms substituting perfectly functional Italian words.

And what’s the solution?

According to Testa, the solution is simple: we just have to start appreciating our language again and use it.

There are hundreds of English words we currently use that simply do not belong to our speech: taking responsibility for choosing their Italian counterpart is the beginning of a process that should help our language rejuvenate and return current.

Testa said to Cini “Finding realistic alternatives to the superfluous use of foreing lexicon is our main objective. We should all try to make an effort and return using Italian words in all those instances when we choose English out of laziness or habit.”

In fact, Testa does more than simply suggesting it. She provides a list of English words we should stop using  in favor of the original Italian. Want some examples? Pubblico instead of audience, austerità instead of austerity, dietro le quinte instead of backstage, rete instead of web, assistenza sociale instead of welfare. There are 300 of such examples on Testa’s website.

I speak 5 languages and I know several dead ones: I think I can easily state – and you will all probably agree with me! – that I love languages. Languages are more than a manner of communicating with one another, they are the first badge of recognition of a person, what makes us immediately distinguishable. Far from saying our own individuality rests mostly in our national origins I, nevertheless, think that where we come from is a huge part of the persons we are and it would be ignorant to deny it.

I think learning foreign languages is essential today and not only in name of globalization or because of the adamant need to propose our skills and capabilities to more than our own national job market. Learning a language places us in the position to enter, understand and experience a different culture much better, with more insight. And do not even get me started on the absolute pleasure to read a novel or a piece of poetry in the language it was conceived in: there is just no comparison!

The majority of us has a mediocre, school-level knowledge of foreign languages and lack the skills to enjoy the linguistic wealth of any foreign idiom, English included. Yet, Italians embrace with enthusiasm the use of foreign words into their own daily vocabulary, as if they really knew what each of them meant to start with.

Laziness, Testa says, but also, in my humble opinion, a bit of silliness: in an attempt to appear trendier and more hip, people just make fools of themselves by peppering their speeches with words they cannot even pronounce properly. Instead of learning to speak English,  they drop English words here and there, thinking it is just the same.

The result is an empoverishment of our own language, Italian, but also a trivialization of English, which finds itself linguistically and stylistically limited to a series of user-friendly expressions and words, but is barely spoken properly.

Italy, my dearest, when it comes to languages (your own and those of others) you still have a lot of work to do.