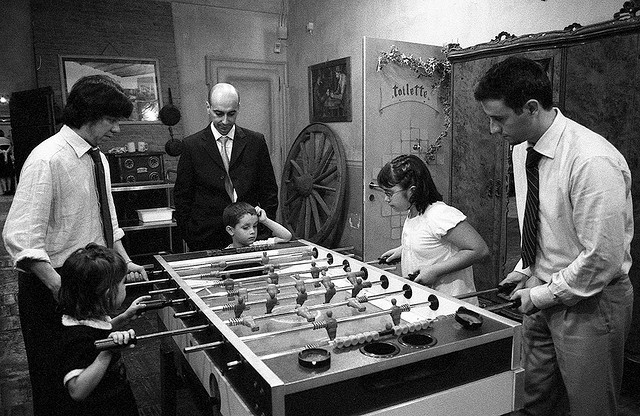 Once upon a time, Italians used to play games that no longer exist; these games were often played in the streets, safer then, as there was little traffic and other types of dangers. Friends’ houses, bars or circoli – clubs – were the most common places where people met and gathered to entertain themselves and spend their free time.

These games had been played for centuries, generation after generation, before technology became such a huge part of people’s lives: today computer games, social networks, the internet have replaced what is now considered old fashioned, yet part of Italian tradition and social history.

Among the most famous…

The trottola, the spinning top

The trottola dates back to 6000 years ago and some were found in the course of excavation works in Pompeii. This game was very famous in Rome, where politicians and plebes alike used to play with it. Mostly made with wood, it rotated through a rope. From North to South, one’ll still find nonni, grandparents, who have at least once played with a trottola with their grandchildren.

This is among the oldest and best known street games; known in many other countries, it is said to have been invented by the Romans, who taught it to children when they conquered new places. However, there are several ways to play it, which change from place to place, also within the same country.

The campana was usually played by girls, at home or at school, using a chalk to draw numbers on the ground. One of the most ancient drawings of a campana was found on the paving of the Foro Romano.

The album di figurine, the stickers’album

Another popular game among children and teenagers was the game of figurine, stickers. It was usually played at school, during recess. This passion boomed, above all, thanks to the Panini album and stickers collections. The game consisted in throwing a sticker with a single finger, and if the stickers fell one over the other on the same side, the person who managed to do it won the stickers: this was not only entertaining, but it also allowed people to win more stickers and increase their collection.

Not long ago, one would have found a calcio balilla or biliardino in every coffee shop, beach or pub in Italy. Children used to love it and adults adored it. Two teams, with two players each, were formed and tried to simulate a football match by maneuvering the little players through cues, and score as many goals as possible.

Although it cannot be considered a real game, but rather a trend, the scubidù mania boomed in 70’s and lasted up to the end of the 90’s. It was a little decoration realized by intertwining two strings of different colours. They were then used as keychains or decorations for school bags. Some teenagers also used to sell them.

Playing games has been a traditional activity since Roman times. Children are said to have a natural aptitude for playing games since the very beginning of their life. Games are also the right occasion to socialize and develop creativity: those we described, certainly fulfilled both points. Some of them are still played in little Italian villages, where tradition has been kept alive and technology has left a small place for old hobbies and games.

In Verona every September there’s the Tocatì, International Festival of Street Games, where players from all over the World participate to show traditional street games.