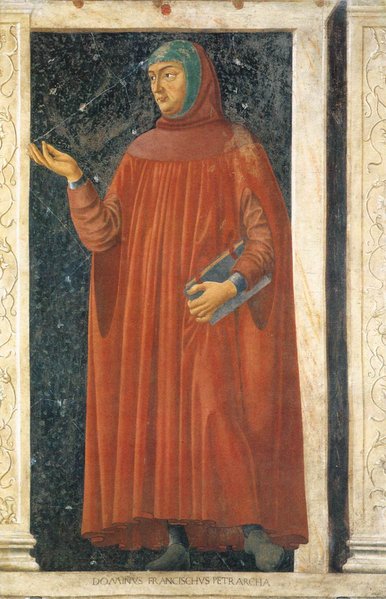 “In my younger days I struggled constantly with an overwhelming but pure love affair – my only one, and I would have struggled with it longer had not premature death, bitter but salutary for me, extinguished the cooling flames. I certainly wish I could say that I have always been entirely free from desires of the flesh, but I would be lying if I did.” -Petrarch

Francesco Petrarch (1304-1374) was one of the great poets of Italian Literature. It is Petrarch, along with Dante Alighieri, who is known as the father of the Renaissance.

Born in Arezzo, he was the son of a notary. His father was banished from Florence due to his connection with Dante in 1302. He was educated at Montpellier and went on to study law in Bologna, although his true passion was writing and Italian literature. It was this gift he shared with Giovanni Boccaccio, and went on to write the epic Italian work, Africa. It was Africa that spun him into celebrity status in Europe.

Spending his younger years in Incisa, Tuscany, Avignon, and Bologna he settled in Avignon in 1326 at the age of 22. It was here in Avignon that he began service of Cardinal Colonna and saw the woman that would be his great love, 19 year old Laura. Laura’s identity isn’t precisely known, but it is widely believed that it may have been Laure de Noves, the wife of Hugues de Sade (an ancestor of the Marquis de Sade). Laura would go on to be the muse behind his greatest work, his Canzoniere. However he seemed to have many muses, one taking the form of the republican Cola di Rienzi and the relationship between the two. This bond of friendship became the legendary ode Italia mia.

Petrarch and Laura never met. He instead fuelled most of his love poetry toward his unrequited feelings for her. It was in Secretum that he expressed the conflict that he had between medieval asceticism and one’s own expression and pride. It was the portrait of Laura that surpassed the typical medieval picture of a woman; it was there Petrarch showed the woman as a spiritual symbol and as a real woman indeed. Laura and Cardinal Colonna both died in 1348 of the plague. It was then that Petrarch devoted his life to the Italian unification and the return of the papacy to Rome. He served the Visconti of Milan to press this cause.

Later on he traveled throughout northern Italy. He never married but did have three children, of which the mother is unknown. Two of his children were Giovanni, born in Avignon in 1337; Francesca, born in Vaucluse in 1343. Francesca gave him grandchildren with Eletta in 1362, and Francesco in 1366. Francesco tragically died before his second birthday.

Petrarch came to rest in Padua in 1367, where he spent his remaining years in religious contemplation. He died in Arquà in the Euganean Hills on July 18, 1374. Chaucer, Spenser, Surrey, and Wyatt went on to translate the sonnets of Petrarch, reaching even further into the literary world.