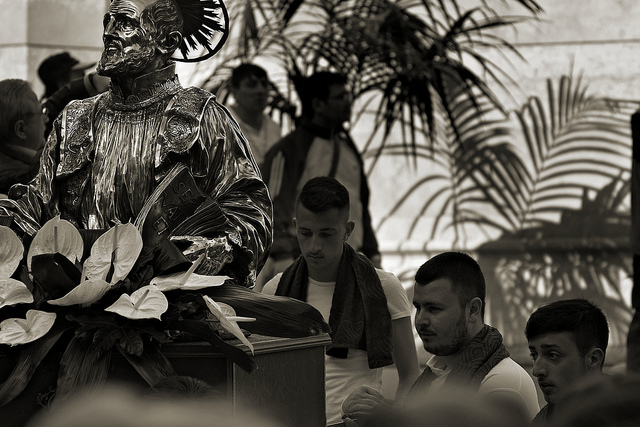 If you go to Naples on September 19th you will find the city celebrating its patron saint, San Gennaro, a bishop and a martyr from Pozzuoli, canonized by the Catholic Church. The feast of San Gennaro involves prayer, processions and celebrations, and is usually based around a fixed program held in the Duomo of Naples. One of the most important events is linked to an emotional ritual, rich in hope and devotion: the liquefaction of the saint’s dried blood.

The Dissolution of the Blood

On the feast day of San Gennaro, believers gather to pray and follow specific rituals, to bring about the miracle that is the liquefaction of the saint’s blood. The “miracle” of liquefaction takes place inside the Duomo, when the substance in the cruets dissolves into a vivid red liquid. The event is celebrated on the first Sunday of May, then again on the 19th of September, and also in December.

According to tradition, the blood of the martyr was collected after his decapitation by a woman, who stored it in two cruets. Neapolitans believe this annual liquefaction is essential to their city and its well being. When it does not happen, tragedy and catastrophe are thought to be near.

The first record of the liquefaction dates back to 1389. Disasters linked the ritual’s failure are the 1527 plague, which killed tens of thousands, and the earthquake of 1980.

The social and cultural value of San Gennaro and its miracle was well understood by the Napoleonic army who, at the end of the 18th century, conquered the city. The day after entering the city, its leader the general Championnet visited the Duomo to “ask” for San Gennaro‘s blessing. Aware of the importance of the cult to Neapolitans, Napoleon and his leaders never forbid worship in the city, nor proceeded – contrarily to what was their habit – to the confiscation or destruction of religious icons and property.

In 2011, soccer mad Naples had a little something extra to celebrate on the saint’s feast day. On September 18th, Napoli soccer team beat reigning champions A.C. Milan, in a spectacular show of goals and passion. The following day 10,000 gathered in the rain at Piazza Plebiscito to honor the city and also their sport heroes. A week later, Napoli would host their first Champions League game since 1990 at the San Paolo Stadium: they were to beat Villarreal 2-0, igniting the imagination of an entire city seemingly blessed by the good omen of San Gennaro’s liquid blood.

The blood miracle has drawn great attention also from scientists and researchers. While some claimed to have debunked the miracle, Catholic Neapolitans firmly believe  the event they attend is unexplainable scientifically and it a gift of San Gennaro to his people. Some have tried to explain the occurrence as the process of thixotropy, which is when some materials become fluid when subjected to mechanical stress and then return to their solid state when left undisturbed.

Others have turned away from this theory, as they believe these types of liquids do not last for centuries, as is the case with the substance within the cruets in Naples’ Cathedral. As for the Roman Catholic Church, they have clarified their own take on the matter. According to the Church the liquefaction of the blood is not a miracle per se, but rather an amazing event considered prodigious by the religious local tradition as the event has not been fully explained yet by the scientific community.

There are theories, yes, but overall the event remains shrouded in mystery prompting several superstitions and legends to sprout up over the years. The most common is associated with the lottery, with many Neapolitans betting on San Gennaro’s numbers (9-15-18-53-55).

A lot of the Italian immigrants who moved to New York City were from Naples and have kept celebrations of the feast of San Gennaro alive and well in their new country.

The feast day is also celebrated in many other parts of the world. Dedicated to keeping alive the spirit and faith of early Italian immigrants, a famous San Gennaro Feast takes place every year in Little Italy, in New York City. Originally a one-day religious commemoration, the event began in September 1926 and has now expanded into an 11-days celebration that begins on a Thursday in mid-September. The event includes religious processions, colorful parades, traditional Italian food and old style musical entertainment. A version of the San Gennaro feast held in New York was also featured in The Godfather II and III.

Naples is a magical spot of Italy where art, culture, spirituality and superstition mix together to create an atmosphere as unique as it is gorgeous. San Gennaro’s celebrations are an amazing opportunity to see this city at its most spiritual, if you believe, or at its most entertaining, if you just want to dwelve in the street celebrations. Either way, San Gennaro’s recurrence in Naples is an amazing time of the year to be in the city.