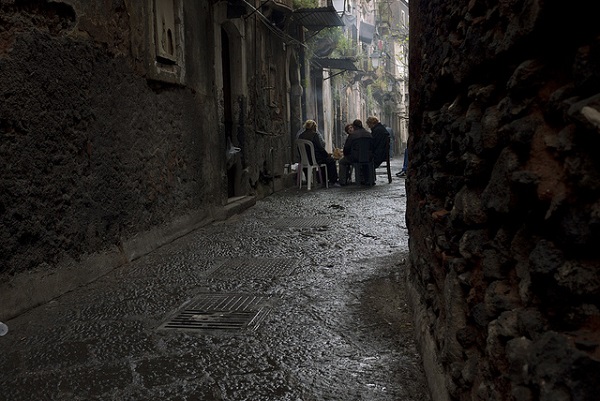 The island of Sicily has always been a different entity compared to the rest of Italy. It is geographically closer to Africa than to Europe, culturally influenced by thousands of years of conquerors and linguistically distinct due in part to its tumultuous history. Today Sicily has been incorporated into the larger Italian culture thanks in part to better education and mass media but Sicilians still think of their island home first and Italy second. Part of this expression of Sicilian pride is the use of their own language when talking amongst themselves.

Often considered merely a dialect of Italian, Sicilian (Sicilianu) is in fact a separate language. Both modern Italian and Sicilian are based upon Vulgar Latin, the everyday speech of Ancient Rome. Linguistic experts put Sicilian in what is known as the Italiano meridionale-estremo language group along with the Greek influenced Calabrian dialects of Southern Italy. Further proof that Sicilian is indeed a language is the fact that is has at least eleven regional dialects. Some experts, such as Dr. Joseph F. Privitera even credit Sicilian as the first Romance language to split from Vulgar Latin. Although this is debatable, it is a fact that Sicilian differs enough from Italian to be regarded as a language and not a dialect.

Thousands of years ago the island of Sicily was occupied by the original Sicilians, the most well-known being the Siculi. These people spoke a language that has not been spoken for millennia, but some words (mainly local names for plants) still survive in modern Sicilian. Once the Phoenicians and later the Ancient Greeks arrived, the indigenous peoples and their language were eventually supplanted. Dialects of Greek were mainly spoken in Sicily until the arrival of the Romans after the First Punic War. It was then that Sicilian received a substantial Latin influence but Greek continued to be the main language for centuries.

With the fall of Rome and the conquests of the Byzantine Emperor Justinian, Greek was further solidified as the Lingua Franca for most of Sicily. However a new layer would be added to the Sicilian language with the arrival of the Saracens from North Africa. The invasions did not stop there of course as the Normans, Hohenstaufens, Angevins and Aragonese all took turns ruling Sicily. While not every conqueror influenced the local language, most of the major occupiers have at least bequeathed a few words and phrases which have helped to make Sicilian so colorful.

The Sicilian Language: Outside Influences

Like every other aspect of Sicilian culture, thousands of years of domination by foreign powers have left its mark on the language. Italian is mostly founded upon a Latin base, whereas Sicilian has elements of Greek, Arabic, Catalan, French and Spanish as well as words derived from the ancient Siculi. All of these linguistic and cultural influences blended with the Latin of the Romans to create the unique character of Sicilian.

Here are a few examples of the foreign influence upon Sicilian:

Greek based words: bucali (water pitcher), cirasa (cherry), naca (cradle), many Sicilian surnames (including the author’s) are Greek in origin.

Of course, the latest and most prominent outside influence on Sicilian is modern Italian, which has donated a whole host of loan words and pronunciations. However Italian has also borrowed from Sicilian, especially when it comes to popular Sicilian foods like Arancini (fried rice balls). The current exchange of words between Sicilian and Italian has further blurred the lines between the two tongues and sadly, weakens the Sicilian as a language argument.

No language remains static. They all adapt and evolve over time, adding words from outside influences and dropping antiquated words and pronunciations. Sicilian is no different and is becoming more similar to Italian by the adoption of loan words with every generation. However there is an increasing drive to preserve Sicilian by teaching it to schoolchildren and to rekindle Sicilian as a literary language. Italian may be the everyday language, but millions of Sicilians still speak their native tongue in the home and among friends.

Descendants of Sicilian immigrants are often disappointed when they discover that the language they grew up with is not spoken in Sicily today. Sicilian-Americans often try to use the words and phrases that their parents and grandparents taught them, only to be laughed at by native speakers. The problem is while an immigrant population maintains the speech pattern similar (but not exact) to what was spoken at their time of departure, the mother-tongue continues to evolve. These immigrants and their descendants are speaking Sicilian, but it is derived from a dialect of Sicilian spoken during the late 19th and early 20th centuries by what was mostly an illiterate peasantry. The Sicilian phrases heard in the “Little Italy” neighborhoods outside of Sicily are often linguistic time capsules, preserving a mode of speech that has not been heard on the Island for nearly a century.