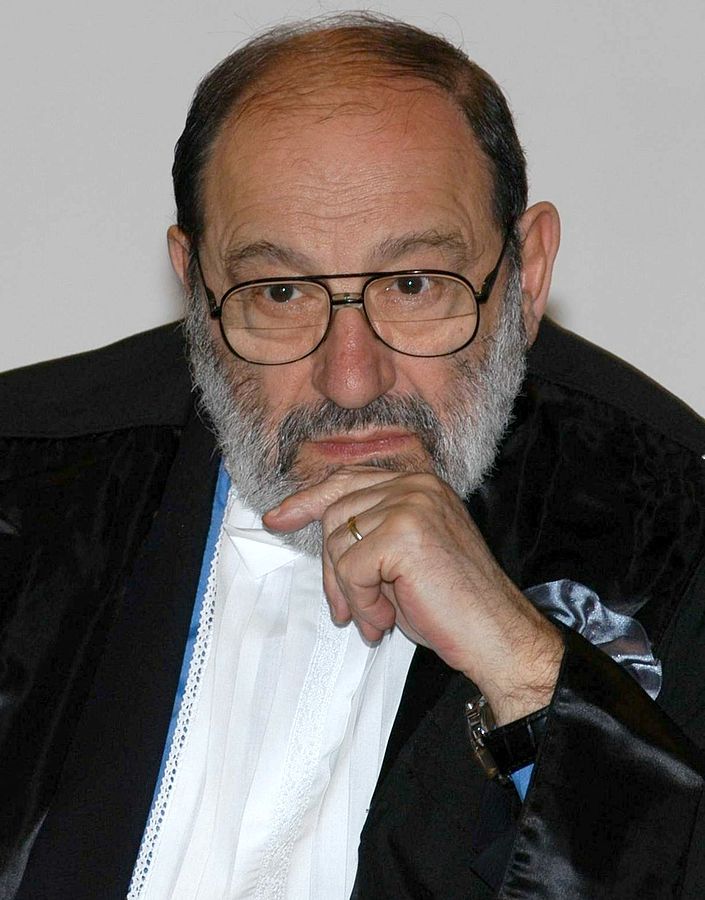 Umberto Eco died on the 19th of February, at the age of 84: a huge loss for Italy’s – and the world’s – cultural panorama. Semiologist, novelist and philosopher, his works on Medieval Aesthetics and Scholastics have been used by generations of medievalists (yours truly included) to get in touch with the times and ideas of those centuries.

Known by the wider public for his novels – especially his 1980  best seller, Il Nome della Rosa, which he later declared not to be particularly fond of – he became one of the most relevant names of Italian academia: he founded the course of Scienze della Comunicazione in Bologna, and taught, throughout the years, in Turin, Milan and Florence.

Born in Alessandria in 1932, Eco graduated in Medieval History and Philosophy at the Università degli Studi di Torino at 22, with a thesis on Thomas of Aquinas. After graduation, Eco began working for RAI (Italy’s national tv), as well as lecturing at his Alma Mater. These are important years for the development of Eco’s creative and philosophical formation. His first publication, an extension of his thesis, was dedicated to the aesthetics of Saint Thomas of Aquinas and was published in 1956.

In 1975, he becomes tenured lecturer in Semiotics at the Università di Bologna. In this University, he will spend most of his academic career, which is however, also dotted with experiences abroad: he lectured at UC-San Diego, Columbia University, le Collège de France and l’École Normale Superieure, among others.

In 1988, Eco founds the Department of Communication at the Università di San Marino. His collaboration with the Università di Bologna brought to his appointment to Professor Emeritus and president of its Scuola Superiore di Studi Umanistici.

Eco retired from active teaching in 2007. Throughout his career, he received 40 degrees honoris causa from universities in Europe and the US.

Since 2010, he was also a member of the Accademia dei Lincei, in the section dedicated to Moral, Historical and Philosophical Sciences.

Recently, Eco had started a new entrepreneurial adventure, with the creation of the independent publishing house La Nave di Teseo. His choice to abandon his historical editor, Bompiani, came after the latter’s fusion with Berlusconi-owned Gruppo Mondadori.

Married since 1962 with Renate Ramge, a German art teacher, Eco chose Milan as his home: a love that lasted until the very end, with Eco dedicating his last published novel, “Numero Zero”  to the Lombard city. Here, he had a library of 30.000 volumes, to be added to another of 20.000 kept in his holiday home in Rimini.

A curiosity: it seems his family name, Eco, is an acronym for the Latin ex caelis oblatus (a gift from Heaven), given to his grandfather, who was a foundling, at the time he was found as a baby.

“The contents of someone’s bookcase are part of his history, like an ancestral portrait.”

“I suspect that there is no serious scholar who doesn’t like to watch television. I’m just the only one who confesses”

“…living the same sorrows three times was a suffering, but it was a suffering to relive even the same joys. The joy of life is born from feeling, whether it be joy or grief, always of short duration, and woe to those who know they will enjoy eternal bliss.” (The Island of the Day Before)

“A library’s ideal function is to be a little bit like a bouquiniste’s stall, a place for trouvailles.”

“I believe that what we become depends on what our fathers teach us at odd moments, when they aren’t trying to teach us. We are formed by little scraps of wisdom.” (Foucault’s Pendulum)

To survive, you must tell stories.” (The Island of the Day Before)

Throughout his career, Umberto Eco published countless books, articles and essays. Most of them have been translated in English. For a complete bibliography of his texts published in the US, you can check his own website, www.umbertoeco.com. Here we will present you a series of his best known literary and philosophical texts.

His last work, Pape Satàn Aleppe, will be published posthomous in May, with La Nave di Teseo.

The Aesthetics of Thomas Aquinas (1988)

Kant and the Platypus: Essays on Language and Cognition (1999)

Belief or Nonbelief? A Dialogue. With H.E. Carlo Maria Martini (2000)

The Mysterious Flame of Queen Loana (2005)

The Bomb and the General (1989, children story)