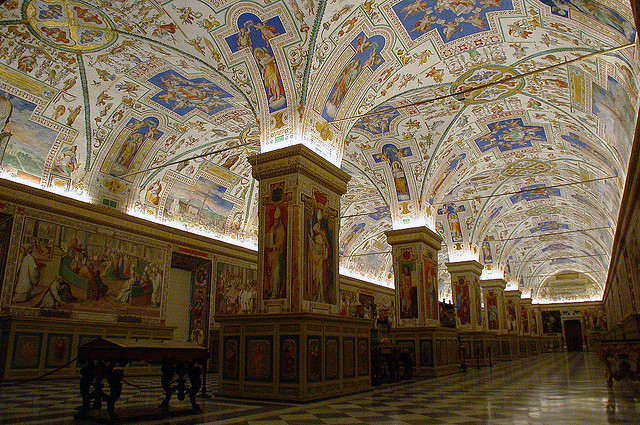 More than 2000 years of tradition and experience

Home decorating “Italian style” draws on long and amazingly rich traditions. More than 2000 years ago, the Romans had developed highly sophisticated architectural and decorative art forms widely used not only for public buildings, but also in the private homes of leading citizens.

Already then, home decorating reflected the population’s values, philosophy and love of beauty and comfort. The amazing frescoes and incredibly refined mosaics used to decorate the living quarters of the wealthy are still visible in Pompeii, Herculaneum, in Rome itself and Ostia Antica, in Sicily and throughout all of the areas bordering on the Mediterranean, where the vestiges of Roman culture survive. Indeed, the excavations of Pompeii and Herculaneum in the 1800s had a significant impact on the construction and decoration of various palaces in Naples, Venice and Milan.

The Middle Ages: the Church nurtures the arts

After the downfall of the Roman Empire and the continuous invasions from northern tribes, a period of decline and stagnation followed, with little development in artistic forms except for some isolated instances. Most artistic endeavors were nurtured and encouraged by the Roman Catholic Church as a means of exalting and promoting the spread of Christianity, and the popes were often great art collectors.

However, beyond ecclesiastical architecture and decorative art forms, a new impetus was given in the 1100s to the construction of urban buildings and fortifications, with the growth of temporal authorities and the rise of city-states and maritime republics like Pisa and Venice. Medieval towns prospered with commerce, agriculture and mining, and by the 1200s many architectural jewels had been constructed. Alongside Romanesque cathedrals and churches there were town halls, government palaces and castles.

The nobles who inhabited these castles were sponsors of decorative art forms, including frescoes and paintings, carved decorations and sculpted furniture, marble and mosaic inlays, precious textiles, porcelain, glassware and fine jewelry.

During the subsequent decades, ever more refined and sophisticated art works were achieved, and in the Renaissance these were fully reflected in the decoration of the homes of the wealthy and the noble. The historic design of interiors is exemplified by such buildings in Florence as Palazzo Pitti, Palazzo Vecchio, and the Uffizi Gallery, not to mention the splendid villas throughout the Tuscan countryside. In Venice, the same outstanding results were reached in the Palazzo dei Dogi, as well as in the many other splendid palaces bordering on the Grand Canal with their magnificent interiors and valuable decorations. Later, the unique villas designed by Palladio in the serene countryside of Veneto, offered yet another example of Italian decorating artistry.

From the 1700s to Modern day Italy

Following a period of some stagnation in the late 1700s and early 1800s, linked to declining fortunes politically, commercially and culturally, the late 1800s saw a new flourishing of interest in decorative art forms as applied to, among others, home decoration. Notable among artistic movements was that of Art Déco of the early 1900s, and this style was widely applied to many household decorative items, from furniture and light fixtures to fabrics.

With the advent of Fascism, innovation was largely stifled and home decoration remained relatively unchanged for several decades. World War II, with the destruction and poverty that followed, left little room for thought of home decorating. Only in the late 1950s and early 1960s did the average Italian citizen have sufficient resources to start thinking about acquiring more than the bare essentials.

Only after the 1960s, following what was called in Italy the Economic Boom, the average Italian began spending to acquire household appliances such as TVs, washing machines, vacuum cleaners, all felt necessary to satisfy a need for modernization and functionality.

From then on, home furnishing and decoration have become an ever more significant aspect of Italian life, and though the art forms have changed and the materials are different, one can easily claim that Italian home decoration is living a new period of glory, in line with the traditions of its distant past.

There is one great difference, though: while in the past only the more affluent could think about interior design or home decoration, today design permeates most Italian homes, and among the younger generations in particular it is no longer a prerogative of the wealthy.

Italian homes now tend to be splendidly decorated, reflecting the individuality and taste of their owners. After many years of research and commercial success there is an immense range of furnishing, decorative, building and technical materials suited to meet the most discerning and varied tastes.

“Good taste” in home decorating is no longer a stereotyped stylistic form.

Without any preconceived ideas, tasteful home decorating in Italy is now recognized as the ability to furnish a home in a simplified manner with functional furniture, using also some unique and beautiful art pieces. The distinction between living room, dining room, kitchen, bedrooms is being restored after a “revolutionary” period when large open spaces were favored as a reaction to the earlier stereotyped solutions that had prevailed for so long.

As part of the ever-increasing quest for individual well-being, special attention is given to the dining room and the kitchen, places where “slow food” is glorified as part of a genteel life style in direct contrast to the much vilified “fast food” trend that is quickly losing ground in Italy after an initial period of popularity.

Similarly, the bathroom is now recognized as a place of rest and restoration, and possibly even meditation, devoted to soothing body and soul. The newest trends in bathroom decoration and technical equipment reflect this trend. Finally, the difficulty that exists in finding house resulted in greater emphasis on home decoration solutions that make housekeeping tasks easier, such as large walk-in closets and storage places, stain repellent fabrics and easy to clean floors.