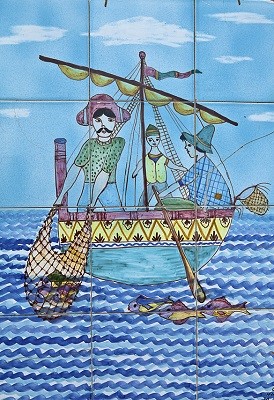 The uniqueness of Vietri ceramics is safeguarded by its trademark method of production that is both old and traditional. The artistic ceramics of Vietri are mainly represented by majolica and earthenware, most often made using red clay, usually from Salerno. Sometimes the red clay is imported from other parts of Italy on the condition that the physical properties of the end product, together with the technologies used to produce it, do not differ from the characteristics of Vietri’s ceramics. Moreover, all the stages of production must be carried out in Vietri’s factories, though local workshops can be supplied with semiprocessed products coming from other factories in Vietri and made using the specific techniques of production.

La Ceramica di Vietri is created through a process of several steps that require care and expertise. The process can be divided into six main steps followed in a chronological sequence: modellatura, essiccazione, prima cottura, smaltatura, decorazione, and, finally, seconda cottura.

The Steps of Producing Vietri Ceramics

Modellatura (Modeling) – The clay is positioned on the lathe. Through rotations and the hands of the potter, circular objects of several dimensions are made. The turning lathe, wick in a plastic state, and calibration with press are all methods used to shape and mold the clay.

Essiccazione (Drying Process) – Once the objects are modeled, the drying process or essiccazione, then starts. Ceramics need to be dried up in order to go through the process of firing. The water present during shaping must evaporate slowly in order not to cause problems in this step.

Prima Cottura (First Firing) – This step requires the firing of the objects. After they have been carefully dried, they are fired at temperatures ranging from 950 to 1050 degrees Centigrade.

Smaltatura (Glazing) – Once the material has been fired it will be hardened and solid, which means it’s ready for glazing. To coat the objects, they’re dipped into liquid enamel that almost immediately adheres perfectly to the object. Any dripping is then levelled off with a palette knife. The enamel used to glaze the objects is called Smalto Bianco Vietri (Vietri’s White Glaze). This color is a dirty white characterized by a vivid shine, which makes it different from other types of white glaze found on other products. The most frequent glazing methods used are dipping, spray booth or curtain coating.

Decorazione (Decoration) – After the glazing, objects are decorated with paintbrushes and colors diluted with water. The decoration must be carried out in a traditional manner, through manual application with paintbrushes. Manual color dusting is also often used, especially to trace the outlines of dishes and tiles.

The traditional images found on many Vietri objects can be found in the catalogue of the Museum of Ceramics in Vietri and from Vietri’s Ceramics Organization. The most frequent colors used for decoration are ultramarine, ancient blue, mountain green, light green, manganese, orange, carmine, brown and black. Other colors are allowed on the condition that they are the result of the mixing the standard tones.

Seconda cottura (second firing) – The second firing is the final firing and the end of the whole process. In this phase the temperature goes from 900 to 970 degrees Centigrade. The object acquires shine in this stage, as well as translucency and water resistance. This is the step that transformes the clay object into a ceramic one.

The firing can only take place in particular types of kilns, as Vietri uses a process of low heat treatment. These include a muffle furnace, intermitting firing tank or a wood stove.

The trademark of Vietri ceramics is its unique and traditional production process, which is monitored closely in order to ensure the integrity of the products. It is this process that has ensured that Vietri ceramics have gained international recognition and fame.