ecoLogica: How many times have we found ourselves breaking our backs in the garden, in order to sustain our dream of creating and maintaining a perfectly green and ordered, ‘English-style’ garden, convinced that we are getting closer to nature in the process. The difficult tasks performed to bring such a garden into being generally include; the excavation and removal of poor, apparently worthless soil, the preparation of lawns and the planting of rose borders and rare trees. The first thing we usually do when making our garden is to destroy what was there in the first place; weeds, poor soil and anything else which doesn’t suit our horticultural criteria. We then set about installing complicated, and expensive irrigation systems, requiring plastic tubes, electric pumps and liters upon liters of water to enable us to make a lawn. 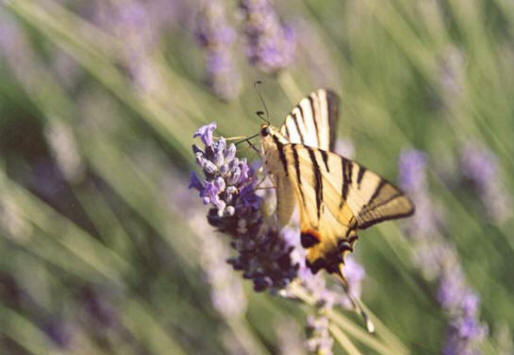 Italian images from the garden

Then when this first backbreaking and expensive stage is completed we are instructed to throw handfuls of genetically modified Argentinean grass seed (football field grass) all over the site together with small blue pellets rich in Nitrogen, Potassium and Phosphorous etc- just to ‘help’ nature along on its way. Then, when the lawn finally grows we begin watering the area twice a day in the ignorance that we are doing something to help the environment, a task that once initiated needs to continue forevermore, along with hours of stressful lawn-maintenance! A young English gardener, named Jonathan Radford has been following orders to do exactly this since his childhood, during a career spent designing and making gardens for the general public following, strictly, these horticultural principles, for 20 years. That was until the world began running out of rainwater! 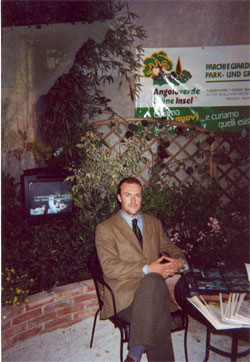 believes that he has found an absolutely beautiful, totally natural and effective alternative to this whole unnatural state of affairs. He has come up with a system that can save 80% of both water and general maintenance in the garden, using a very simple natural logic. Ironically he uses completely the opposite techniques to the ones used in the standard modern system of garden construction; he doesn’t use irrigation, grass seed or chemicals, thus reducing installation costs by 50% and allowing nature to do exactly what he wants it to do by using nature’s very own logic, however at the same time allowing nature to do what it desires too!

For the last few years Jonathan has been designing Mediterranean gardens that suit their surroundings perfectly, sustain local plants and wildlife yet do not require watering or mowing regularly once they are established (after just one year!) and all without using chemicals or grass seed! He has taken this system to Tuscany, where he now makes these gardens around the famous farm-holiday houses in the Tuscan countryside, selling poppy-fields and gravel gardens for a living.

When pushed to reveal the secrets of his new system he insists that it is really so very simple that he cannot reveal how it works, as he admits that he would very soon find himself out of work! However he reveals gladly that he uses very simple horticultural principles and lunar-cycles to invite wild-flower seeds to germinate, which in some cases have waited patiently in the soil for up to forty-years for the right conditions to break free from the soil. This, he insists, is the secret of gardening- to understand how nature functions and then too allow it to behave almost how it would if left alone, with just a little intelligent persuasion, as he puts it!

Jonathan’s system is divided into two parts; one part being dedicated to the area immediately around the house, the part which is clearly used for lying in the sun and socializing; while the other half of his system has been formulated for those vast areas of grassland that are generally used for olive cultivation, which he and many others have been breaking their backs over to prepare, mow and maintain for way too long …he says.

His solution for this time-consuming grassland maintenance is to transform it into thousands of Tuscan poppies, wild gladioli, wild carrots, tens of rare orchids and thousands of butterflies and glow flies, so quintessential of the Tuscan countryside, using a treatment that costs a mere $300 per hectare in its most simple form and requires cutting and collecting just a couple of times a year. He reveals proudly that his mission here in Tuscany is to help revert the countryside back to how it was before the 20th century, and before the arrival of the “Nordic” garden which has brought with it foreign plants and thirsty watering techniques, so alien to this countryside.

He smiles when he talks about the irony of the fact that the Tuscans use all their money, effort and water to create and provide lush, green gardens around their holiday homes for Nordic travelers, when those same travelers already have identical gardens at home in the countries they came to Tuscany to escape from in the first place! Jonathan is adamant when he declares that in just one year he can transform any site into a Tuscan paradise, costing just 50% of a traditional garden and guaranteeing at least 80% of the water necessary for irrigation, a healthy 80% reduction in garden maintenance and all completely organic, indigenous and so very Tuscan; this is the future for gardening- he insists!

in Italy > Decorating > Garden > A Wonderful Garden in Italy