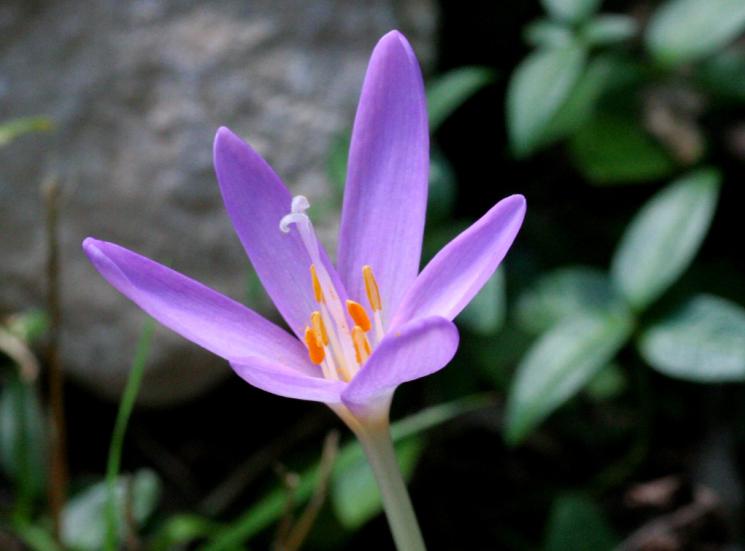 Saffron and its deadly –but pretty– cousin: the naked lady

Saffron made in Italy has now staked a large claim to the saffron market, with organic growers of this fascinating crocus flower now appearing all over Italy. The flower of crocus sativus still grows wild in the fields and woods of Tuscany, where saffron production now proliferates. Although the wild saffron crocus begins flowering in September, it can keep providing its violet flowers right through on into February. You must keep your eyes well open, though, because the lovely purple flowers you come across may not be those you are looking for…

In a twist deign of the best thriller, wild saffron has an identical, but deadly, cousin: the colchicum autumnale, commonly known as meadow saffron or naked lady.

Saffron and the naked lady: their similarities and differences

Colchicum autumnale is a bulb flowering from September through to February and, in spite of having flowers looking very much like those of its more popular relative, no parts of it are edible: in fact, its stamens contain a chemical very similar to arsenic, colchicine. Colchicine is highly poisonus and has no antidote, however, it has also therapeutic uses. It is FDA approved and, in controlled doses, forms and manner of subministration, is used to cure gout and familial Mediterranean fever. Curious as it may seem, so, even the “impostor” plant has some very important properties which, surprisingly, are not at all harmful.

Otherwise known, as we said, as “meadow saffron,” “naked lady” (owing to the fact that the flowers appear long after the leaves have withered) or “autumn crocus,” its flowers are almost identical to those of the saffron. The only visible difference between the two plants is that the saffron flower has three stamens, whereas the poisonous colchicum has six.  Saffron stamens are also longer and visibly  protrude from the flower’s petals: it is here that precious saffron is contained.

Saffron and the naked lady in the garden

From an Italian gardening perspective, however, both the real saffron and the ordinary autumn flowering crocus provide an excellent splash of natural colour. These small plants (particularly the saffron!) are an ideal addition to the organic or ecological Italian garden, as they are now endangered species in the wild. Grow in full sun, plant at around 8cm deep and apply some bone-meal when planting and watch them spread joy across the ground- but please… DO NOT eat the wrong ones!

As you know, saffron is a very common spice in Italian cuisine. Once considered more expensive than gold itself because it had to be imported from the East, saffron today is a staple of every Italian larder. It adds its exotic flavor to many pasta and rice dishes, but it is also delicious in soups and to make sauces to match with white fish and meat. The most iconic Italian dish with saffron (which we call zafferano) is definitely the risotto alla milanese, a creamy risotto aromatized with saffron and served with ossobuco (shin of veal containing marrow bone). A famous variation calls for fresh sausage meat instead of ossobuco. In Abruzzo, a particular type of pasta called cannarozzetti, similar to penne, are dressed in a rich sauce made with guanciale (a particular type of bacon), ricotta and saffron. If you think that saffron is good only to add flavor to savory dishes, you are very much mistaken: desserts made with it are pretty delicious, too: saffron is a popular addition to sponge cakes and creams, and it can also be used in small quantities to add color to your creations.