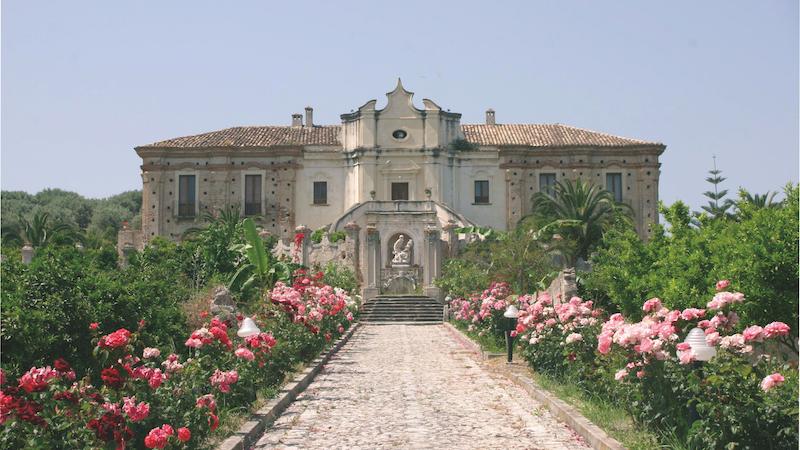 UPDATE, NOVEMBER 2015. The two best parks in Italy for 2015 have been announced: they are the Giardino di Ninfa for the private parks category and the garden at Villa Medici in Rome for the public parks category.

“The most beautiful parks in Italy” competition has arrived to its 13th edition in 2015. The competition aims to draw public attention to the green treasures of Italy. The finalists are chosen between thousands of parks, green lands, botanical gardens, and the choice is based not only on their natural beauty, but also on the uniqueness of their architecture.

The villa was the rural residence of a german family and was bought in 1914 by Giuseppe Toeplitz, a banker of polish origins, from where the name comes. Since 1972, the villa and its park are owned by the Varese Municipality.

The gardens of Villa Toeplitz were designed in 1927. The park, that extends for about 8 hectars (almost 20 acres), boasts bucolic paths leading past gardens, fruit orchards, beautiful fountains with mosaics and grey marble from Carrara, and amazing ornamental water features. There are numerous species of trees, including some exotic ones. The park is open to the public and the entrance is free; the villa hosts the University and a Museum.

Villa Visconti Borromeo Litta dates back to 1585, when Pirro I Visconti Borromeo bought an old farm and transformed it in a villa with a beautiful park, the perfect location for parties and cultural gatherings. The park includes the fountains of Galatea and Neptune, a citrus garden and an outdoor theatre used for concerts, plays and other events. The Nymphaeum (pictured below) is one of the most important in Europe, appreciated for its decorations (that include statues, frescoes and mosaics) and water features. The villa and its garden were bought in 1971 by the Municipality of Lainate, which, in 1980, started restoration works. The villa can be rented for events and weddings; visits to the park and the Nymphaeum cost 10 euro.

Adrien Charles Wettach, alias Grock, was an artist and worldwide famous clown, that built the “Villa Bianca”, a 50-room house now known as Villa Grock, in Imperia in the 1920s. The villa and the park are an interesting mix of styles, a fusion of mistery, fantasy and esoterism, expression of the nature of the artist. The spaces, shapes and lights of the terraced garden symbolize the circus world that Grock loved so much. The exotic lake, where Grock used to fish and bath in the Summer, boasts a beautiful stone bridge that leads to the small temple of the garden. The Orangerie, originally the Winter garden, is now the location of weddings and cultural events. The villa is open Satudays 3.30pm to 6.30pm; entrance fee is 5.50 euro.

The architectural complex includes the 18th century Villa Pinelli, its annexes and a Tudor style cottage, added in 1850 by Marquis Orso Serra. The English-style, 9 acres park was created in the mid-19th century and consists of serpentine paths, small lakes, streams, waterfalls and exotic tree species. The best time to visit is in Spring and Autumn for the colors, in Summer to admire the blooming of hydrangeas. Park and villa can be rented for events; you can visit the villa between 10am and 5pm in Winter, 10am to 7pm or 8pm during the Summer. Tickets cost 3 euro all year round.

The Tarot Garden was created by french-american artist Niki de Saint Phalle between 1979 and 1996, inspired by Park Guell in Barcelona. It exhibits 22 giant statues representing the greater Mysteries of the tarots, decorated with mosaics made of mirrors, glass and ceramics that create colorful patterns. The garden is a wonderland and the artist’s ode to women’s power to create.

This garden represents a happy synthesis of the geometries of the Renaissance and the spectacularity of Baroque. Works on the garden started in the 16th century. The villa and the park are closely associated to the village nestled around them: originally, the two paths that crossed the park were the only entries to the village. The park, that extends on a hill, is an incredible balance of green, stairs, water features and statues. It boasts a maze, flowerbeds, caves, mythological figures, an interesting Butterfly House and an imposing greenhouse in plate glass and stone, with a luxurious tropical garden. Between August and September the park hosts the End of Summer Flowershow. Entrance to the park is 8 euro.

The panoramic gardens of Villa Medici in Rome, home of the French Academy, are on the Pincio hill. The villa was completely rebuilt between 1564 and 1575; in 1576 Cardinal Ferdinando de’ Medici bought it and added the statues’ gallery, a precious archaeological collection, that attracted many visitors. It has been property of the French government since 1803.

The ticket of 12 euro includes a guided tour of the villa and its gardens.

The English-style Ninfa Garden, was created in the 1920s on the ruins of the ancient settlement of Ninfa, that already existed in Roman times. This garden is considered one of the best in the world because in it old ruins and wild vegetation live side by side. It’s a romantic garden, with no geometrical divisions, but natural and spontaneous.

It’s open only a few days per year to preserve its fragile balance: the first Saturday and Sunday of the months from April to October, the third of June, and the third Sunday of November. Entrance is only allowed as part of a guided tour of about one hour that costs 12 euro.

La Cutura is a Botanical Garden “on the rock”, that exhibits succulent plants with interesting information about their origins, the way they reproduce, the legends around them, their history. There’s also an area dedicated to Mediterranean vegetation (with pine, cypress, juniper, broom, myrtle, sage, rosemary), a small lake with aquatic plants (water lily and lotus), 100 different types of roses and 18th century oaks so reminiscents of a Monet’s painting even the garden’s restaurant has been named after one of his masterpieces: “Déjeuner sur l’Herbe.” This is a great place for events and concerts. There’s also an Italian garden with geometrical beds, the “Garden of the Simple” (with the officinal herbs once grown by monks in their abbeys to produce infusions, syrups and liquors), the “Garden of the Perfumes”, that changes its scent with the change of seasons and the “Secret Garden”, that hides the most precious plants in secluded corners. The garden’s 18th century manor farm can also be visited. Entrance fee is 5 euro.

Villa Caristo, built in the 18th Century, is the only example of Baroque architecture in Calabria. According to legend, the villa was constructed on the ruins of a Roman villa; the name of the architect that designed the villa is unknown, but it has strong Neapolitan influences. The entrance to the villa is dominated by an imposing stone staircase; in the garden there are three fountains, with statues of Tancredi and Clorinda, the protagonists of a drama in which Tancredi, a christian knight, falls in love with Clorinda, a muslim warrior, but he has to fight and kill her. Villa and garden can be rented for events and weddings.

The competition started in 2003 and every year the winner has been different. First there’s a selection of the best 10 parks, and then, between these, the winner is chosen. In the last three years the prize has been divided into two categories: private and public parks; this refers to the ownership, not to the fact that the park is open or not to the public.