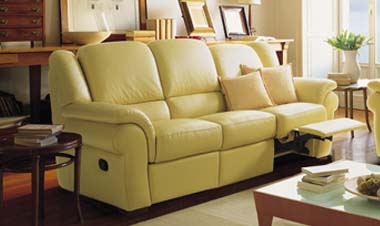 height of 6m in the right conditions. Although fully hardy, it does

egg-shaped, edible fruits. It has grey-green leaves with a white, downy

underside, which can become an attractive feature on windy days when

the underside is revealed.

In summer it bears ornamental, white

flowers with long stamens, formed in dense bunches in the middle of

the flower. It can be maintained in a spherical form by annual spring

pruning and provides a pleasant silver-grey element within an Italian

against a warm wall. It is an unusual and original addition to the Italian

garden, as it is not used as much as it should be and will surely create

but they will not ripen unless the plant experiences a long warm summer,

therefore the warmest, most sheltered position should be chosen in the

garden for this plant.

in the cosmetics industry. The fruit has an unusual aroma, caused by

of vodka and yoghurt. The fruit of the Feijoa remains green even when

the plant in late autumn.

The grey foliage of the Feijoa provides a great, Mediterranean feel

plants to provide a harmonious backdrop for pastel colours, particularly

soft pinks, mauves and blues. There are few plants that provide the