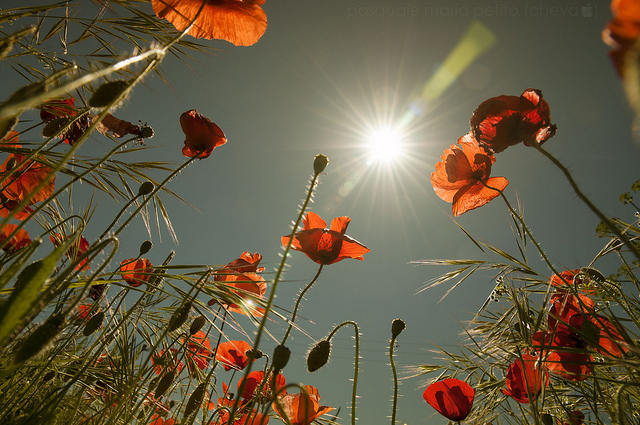 The Corn Poppy in Italy

There can be few people who are unable to recall having seen a field of bright, blood-red poppies exploding en-masse in May or the blazing impressionist paintings of Claude Monet. Across the globe, from Egypt to North America, cultivated fields suddenly become dazzling swathes of an intense blood-red in an instant and as if by magic!

The variety of papavero (poppy) that has become known as the ‘Tuscan poppy‘, or ‘Corn poppy‘ probably originated in North Africa, where early agricultural practices began favoring this stunning plant. Papaver rhoeas is an annual plant whose survival is now dependant upon the rhythms necessary for grain cultivation.

Growing on disturbed soil and seeding itself profusely during its growing season, the poppy has found a perfect harmony with the agricultural practices for the past 3,000 years or so and remains of the plant have even been discovered in Egyptian tombs.

For any normal ‘weed-plant’ the cultivation of the soil spells disaster, but not for the poppy: in fact, it enhances its survival chances, thus making it a permanent fixture in our fields since agriculture has begun. A sun-lover, the poppy grows in almost any soil but favors the heavy alkalines, making Tuscany its ideal place, given the extensive grain cultivation and thick clay soil.

In fact, poppy fields have become a very strong visual symbol of the Tuscan landscape, almost synonymous with Tuscany and all things Tuscan. The strong Tuscan sunshine favors the growth of this plant and helps highlight the very brightest of reds in the wild-flower range. Refracting with green and complimented when set against yellow,  this plant tends to propel its vivacious color from the backdrop of Tuscany’s deep, lush greens of young wheat fields.

Then, as the Summer draws on, the remaining swathes of poppies sit harmoniously with the drying grass and ripening grain in early June. Swaying in the cool breezes of early Spring, the corn poppy displays its splendor in the moment when it is most required (around the beginning of May) a moment when most of us are longing for the Summer to begin…

An ancient Greek legend explains, rather romantically, how the poppy adopted the name ‘Corn’ Poppy. According to myth the poppy was created by the Greek God of sleep, Somnus, in a period when Ceres, the goddess of harvest, was apparently having trouble sleeping and was also searching desperately for her lost daughter – therefore she clearly lacked the energy to make the corn to grow. Somnus, realizing the gravity of the situation, quickly brewed a concoction from the poppy, offered it to Ceres and, so legend has it, “Ceres was soon sleeping like a baby again!” and soon felt rested and relaxed.

Ceres suddenly found the energy and turned her attention once again to the corn fields which miraculously began to grow well. The poppy’s appearance along field margins has stood as a strong symbol to the Greeks ever since, and its presence ensures abundant harvests in the fields.

This plant is more than a mere invader of our wheat fields and, aside from its breathtaking flower-spectacle, it offers we humans much more!

This elusive plant does in fact have many medicinal properties. The Romans used the plant to soothe away the “aches of love” by drinking a sedative tea which would have released a substance called Morpheus – a delicate opiate present in the plant thus aiding insomnia and stress relief.

The petals of the Tuscan poppy contain substances that aid insomnia, making papaver rhoeas  slightly narcotic. The chief constituent of the fresh petals is the red coloring matter, which consists of rhoeadic and papaveric acids. This color is much darkened by several alkalis present in the plant and all parts of the plant contain the crystalline non-poisonous alkaloid rhoeadine. The amount of active ingredients is minimal and its exact quantity is unclear.  There is still great controversy regarding the presence of another powerful sedative: morphine. It has, as yet, not been determined whether meconic acid, which is present in opium, is also an active constituent of papaver rhoeas.

The seed of the corn poppy has been used for centuries for the flavoring of bread and desserts, and its leaves can be used in salads and garnishes or even be boiled and served rather like spinach.

The poppy’s intrinsic, if not somewhat menacing, relationship with man could, at the very least, earn this plant some respect for its survival tactics; the dazzling appearance of this humble yet stunning beauty in a season that so longs for hot color can only instill admiration in its onlooker. However this ‘simple’ annual, whose seed can wait patiently for up to 40 years before germinating, has evaded all of man’s attempts to eradicate it over the past 3,000 years, while keeping the audacity to choose, very precisely, in which field it prefers to grow in.

Poppy remains, and will probably always remain, a beautiful, though as yet, unsolved, natural mystery!