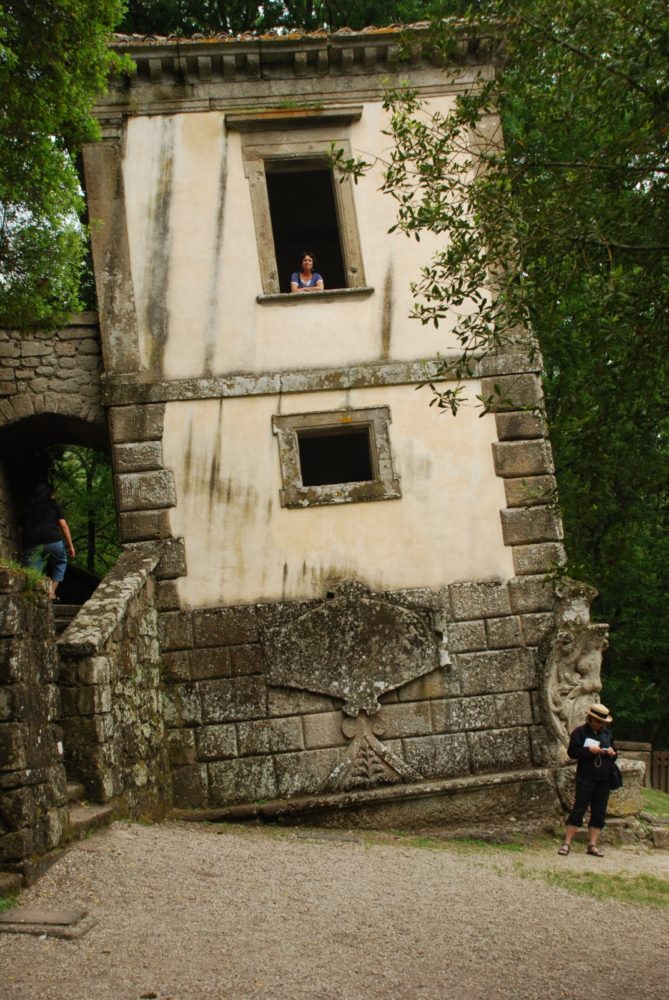 One of the more intriguing and sometimes disconcerting features of a Mannerist garden is the sensation of being watched as you stroll through. Even when no one is nearby and silence settles, that tingling in the back of your brain will not go away and from the corner of your eye you think you catch a glimpse of… something. It’s not movement so much as a shape, not alive so much as filled with life, and not someone so much as something. Why is this so? What is it about these sixteenth century gardens that creates this sensation? What does ‘Mannerist’ mean? When and where did the style originate and flourish? And who were the famous artists / architects / sculptors of the movement?

Most of us associate Italian art and architecture with either ancient Roman styles – think of the Coliseum or the Pantheon – or with the Renaissance – think Caravaggio, Raphael, Ghiberti, Bellini, Titian, da Vinci or Michelangelo to name a few of the more famous. After the Renaissance, if pressed, some of us might be able to come up with the term Baroque, but the Mannerist gets lost, unremembered for the most part outside of those who study such things. And this is a shame; the Mannerist style is intriguing, surprising, a bit eerie, and wonderfully fun to explore.

While styles of art and architecture are hard to pin down to particular years, and are for the most part not recognized as separate, distinct styles by those who practice them, historians who look back through history and name periods of time can indeed pick out various characteristic elements. The styles morph and merge organically throughout time; the labels come later. And while Mannerism flourished during the mid-late sixteenth century, it wasn’t defined until the eighteenth century.

Mannerism was both a specific style and a transition between the High Renaissance and Baroque periods, and in large part it was a response to both political and social upheavals. While Renaissance artists looked to the classical period in order to find models for their own work and to use the original for inspiration, Mannerist artists took those same classical models and took liberties with the rules, distorting classical motifs in bizarre and entertaining ways.

Some of these bizarre and entertaining elements included fantastical and / or grotesque figures, the use of water in unexpected ways – visitors to the gardens had always to be prepared for a soaking by water jets – and a sense of instability and surprise that stemmed directly from these gardens’ wandering paths that created bends, nooks and crannies, any one of which could hold yet another fantastic statue.

Contemporary visitors to Mannerist gardens would be entertained in slightly more subtle ways; the figures and sculptures scattered throughout were often directly referencing myths or stories the visitors knew well, completing the story for them in ways that went beyond the actual physical presence of stone into the mysterious, mythic, sometimes magical realm. Helena Attlee, in her beautiful book “Italian Gardens: a Cultural History”, tells us that these gardens were a “deliberate distortion of established architectural vocabulary” (pg 80). In other words, those in the know would be far more entertained by the distortions than, say, those of us who have no idea what they actually referred to.

This is not to say that a visit to these gardens is anything less than spectacular. Two Mannerist gardens which can still be visited today are the Villa della Torre near Verona, and the Sacro Bosco in Bomarzo. The Villa della Torre was designed and built in the 1560s using the ancient Greek peristyle, or columned porch or colonnade that surrounded it. It is worth a visit in order to see one example of how Mannerist gardens could be laid out, though it pales in comparison to the Sacro Bosco.

The Sacro Bosco (Bomarzo), or Sacred Wood, was created in the years between 1552-1584 by Vicino Orsini, and still offers all the magic and mystery, the complexity and surprise, that are integral to Mannerist manifestations. The trails lead up and over hills, down through narrow grottos, along twisting pathways that reveal, around almost every bend, a new wondrous creature carved in stone. The sculptures are rough, almost crude, as though emerging from the earth, and have no sense of decoro – or appropriateness – that characterize most other gardens.

Down a set of stone stairs is a huge stone giant tearing an opponent in half, not visible from the path just above it. Farther along the path Poseidon rises from the earth, his expression unreadable, his chest and arms appearing as though on the verge of lifting. A woman stands on the back of a tortoise, while a winged horse takes flight near a long sea creature that rises and descends in ripples from the earth. Another woman – or goddess – is surrounded by cavorting cherubs, and the now-empty pool around her is evidence of the garden’s once-active waterworks. Not far from there, an elephant carries a small tower, and holds a limp soldier in his trunk. Disembodied heads float today on short pedestals along pathways; where they originally stood is an unanswerable but intriguing question. And a stone house leans precariously off center, its rooms similarly distorted, bringing to life the conceptual deliberate distortion of architecture Attlee spoke of.

All of these wondrous, monstrous, grotesque and startlingly beautiful sculptures are exquisite examples of what Mannerism was, what it set out to do, and how it accomplished its goal: they startle us, they make us laugh or shudder, and they make us wonder just what kind of mystery they bring with them into the world. These emotions and questions come to a point of heart-stopping awe when, not far from the still-and-always half-risen Neptune, just around the next bend, one comes face to face with the mouth of hell.

Hell’s Mouth is an immense sculpture of a stylized face, its mouth gaping below two empty eye sockets. It sits at one end of a small courtyard, atop a flight of wide, short steps, and today is surrounded by trees and moss that grow on the rocks behind it. An inscription barely visible around the edge of the mouth evokes Alighieri Dante: “Lasciate ogni pensiero voi ch’entrate / Abandon all thought, you who enter here.”

This could be both the invitation and the warning that visitors need as they travel through this enchanted wood. Don’t think too much, don’t try to figure it out, and don’t expect it to leave you alone after you go home. Sacro Bosco does just what Mannerist gardens were meant to do: it gets into your head and into your heart. This garden pulls you into that mysterious place between myth and reality where dreams and monsters come to life – in stone, forever asking the question found on another of the figures: “Tu ch’entrai qua pon mente parte a parte e dimmi poi se tante meraviglie sien fatte per inganno o pur per arte / You who enter here put your mind to it part by part and tell me then if so many wonders were made as trickery or as art.”

In fact, Mannerist gardens‘ “great and stupendous marvels” were both.