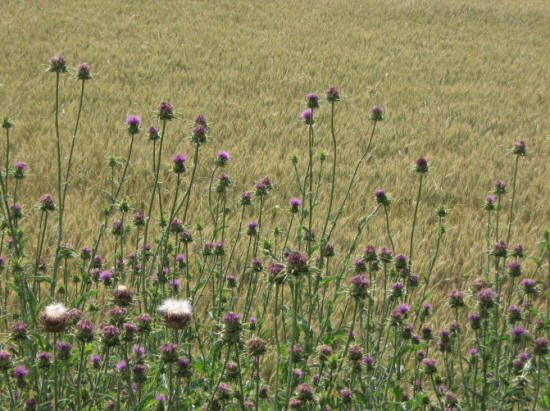 Useful Information on Growing Rosemary in your Garden 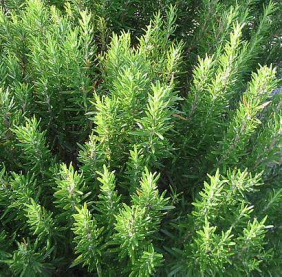 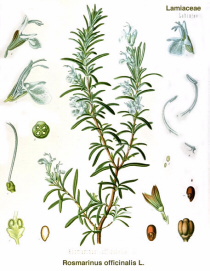 Rosemary, that great Italian culinary herb that is listed in every

Italian recipe, an aromatic herb that is used in almost every dish from

Scotland to Rome. How though, does one grow the stuff?

If you have ever created small herb garden, with the aim of using

those herbs in Italian style cuisine, then you may have run in to some

problems. “Why do my lavender, rosemary and Italian herbs always die

on me?” is a phrase stated by many a frustrated housewife but lifeinitaly.com

is here to help!

herbs. This wonderful herb dates back to the origins of Mediterranean

culture itself. Athenaeus, the ancient Greek philosopher, was writing

about rosemary along with other herbs in the 2nd century A.D.

Above: Athenaeus, the ancient Greek philosopher

The Etruscans, that fascinating race that forms the origins of modern

day Tuscany, were already using rosemary as a stuffing for fish in around 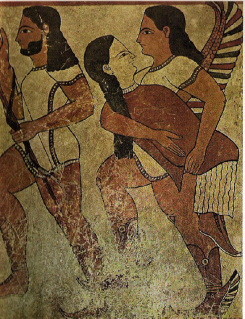 Above: An Etruscan fresco, found in Paganico, Tuscany

The Etruscans believed that rosemary was capable of warding off evil

(communal tombs), when they buried their deceased.

Greek students in ancient Greece wore garlands made from rosemary

at funerals. In fact rosemary contains several physiological and mental

stimulants. The 1-2.5% of essential oil present in the rosemary plant

can also be used as a cure for respiratory ailments, renal colic, anxiety,

depression and it can even stimulate hair growth in men!

have admired and utilized it’s properties and the relationship between

the two is extremely ancient and complex.

In a garden context the rosemary offers the gardener and designer

a wonderful plant that resists poor, dry alkaline soils and revels in

both bright sunshine and dappled shade. It provides an evergreen structure

that will remain full and healthy for many years, if pruned correctly!

Like many other Mediterranean plants, the rosemary has it’s own specific

pruning time. Immediately after the first flowering in late May it’s

branches can be reduced as far as the last sign of green on the stem.

and pruning after flowering will ensure the production of flowers for

oil than stems of 1 year old or more, therefore the best stems for cooking

are those that are slightly more mature. A rosemary plant that never

so try to trim it each year.

Rosemary is also very useful in the ecological Italian garden as

it is one of the best flowers for honey production. Honey made from

and the bees just love it! 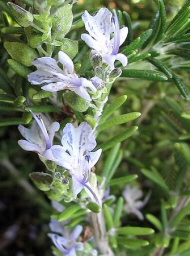 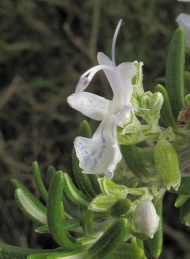 Above and right: Rosemary flowers 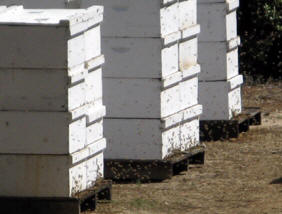 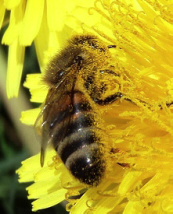 Above: Bee hives and a common honey bee

Given the ease of cultivation, it’s wonderful history and the ancient