A Jewel of Italian birds

If you noticed an orange/pink, unusual looking bird with a striking crest on its head while visiting Italy then you had probably been lucky to have seen the Hoopoe, a stunning migratory visitor to Italy. The Hoopoe is quite an unmistakable bird, it has bright orange plumage, it flies rather like a woodpecker and has a striking orange crest, black an white markings along with a long, slender and pointed beak.

The Hoopoe can generally be seen on Italian garden lawns strutting comically, searching for worms and other small insects which are its favorite food. The Hoopoe is a relative of the kingfisher family and is a frequent summer visitor to the Mediterranean, migrating to the tropics in winter.

The Hoopoe’s bright colors, sweeping flight pattern and orange crest make it a striking feature to the Italian garden.

The Hoopoe’s crest can be raised when the bird is alerted and makes for an unusual spectacle in Italian gardens during the spring and summer months when they are more visible. 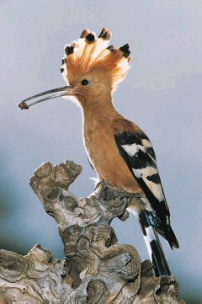 Hoopoes nest in holes in old trees that may have been made by woodpeckers, or in old walls etc. After taking over the hole it lines the nest in feces in order to ward off predators. It is also capable of literally spraying liquid feces at any intruders to its nest. This earned the bird the label off being a ‘dirty bird‘ and even the New Testament referred to it as such.

In fact the Hoopoe has appeared throughout history and it has even featured in ancient Greek mythology. Thereus, the son of Ares (the God of war) was turned into a Hoopoe after he committed suicide.

The Hoopoe’s call is what has given the bird its name, as it makes a “Hoo – poo” sound and the Hoopoe’s call symbolizes the arrival of spring in Italy. Curiously, even the Chinese regard the bird as being a messenger of springtime. In Islam the Hoopoe has close links with King Solomon, who reputedly spoke with animals and the French call ignorant, unintelligent people “Hoopoes” as they consider the bird to be slightly stupid.

The Hoopoe can easily be encouraged into the Italian garden by avoiding the use of pesticides and by providing large expanses of organic wild flower meadow, in which they can forage for food undetected. Small areas of short grass should also be provided as they require these for hunting worms and insects. A natural, ecological and balanced Italian garden will provide all that this jewel of the Italian garden requires!