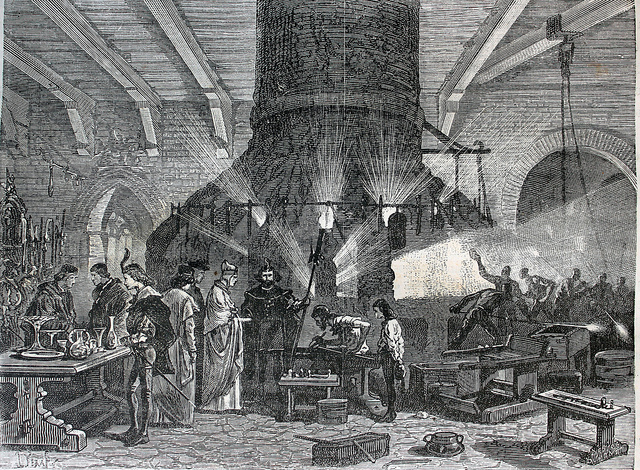 The raw materials used in Venetian glass during the Renaissance differed slightly from their competing Islamic counterparts.

In this subtle difference lies the transcendence of ordinary glass to the heights of remarkable art. The base ingredient of glass is silica. The most common form of silica used in glass making is sand. While sand has a relatively low melting point when compared to pure silica, it also comes instilled with many impurities which can discolor or otherwise defect glass.

The production of cristallo, the purest of glass

The production of clear, colorless glass free of defects was difficult and, as a result, such pieces were highly sought after. This glass, called cristallo, for its ability to mimic the appearance of rock crystal, was the foundation of Venetian glass designs. To obtain clarity of glass, glass makers strived to acquire only the best of raw materials. Ordinary sand was replaced by quartz pebbles collected from the river beds of the Ticino and the Adige rivers.

These pebbles, called cogoli, were a source of nearly pure, naturally occurring silica for glass makers in Murano. The pebbles endured much scrutiny before being chosen as material for glass. They had to be as colorless as possible, without veins of mineral impurities, and they had to spark when being struck by steel.

After passing inspection, these pebbles were heated until they glowed, then dipped in cold water. This process of heating and submerging materials in water was a common practice and served to help remove impurities that bled out of material. Following this treatment the pebbles were crushed and ground into a fine powder. The finer the cogoli, the more beautiful the end product.

A bit of chemistry

The next critical raw material involved in glass making is a fluxing agent. A fluxing agent is a material that serves to lower the melting point of the glass, thus making it possible to melt glass in a wood burning oven made of clay. Fluxing agents were also added to enamels that would later be applied to decorative glass to give the enamel a melting temperature that was lower than that of glass itself. While many different fluxing materials have been used in the manufacturing of glass, Venetian glass makers used “Levant soda ash”, called allume catino, which they held the sole trade monopoly for.

This soda ash was created by burning salsola soda and the salsola kali plants that grew in the Levantine region. The allume catino underwent a similar purification process as the cogoli. The ash was sifted until only the smallest particles remained. These particles were boiled repeatedly to distill the salts in the plant matter, then the damp material would be put into shallow pans to air dry until it recrystallized as a white salt which was powdered once more. This helped remove excess iron from the plant material, which could lead to discoloration of the glass.

To further inhibit the colorization that occurs under the presence of iron, manganese was added to the final mixture. Manganese was often called “glassmakers’ soap” for its ability to counteract discoloration caused by iron and other impurities. It was also instrumental in creating other colored glasses and in lengthening the time that glass would stay molten and pliable, thus allowing glass workers more freedom in their designs. Venetian glassmakers only used manganese from Piedmont because it naturally lacked in substantial iron content. Manganese was not an expensive component in glass making, because little of it was required.

After these materials were refined they were mixed in together to form a glass batch. A batch refers to the materials after they have been refined, mixed, and are ready to be made into glass. The glass batch was prepared by a conciatore, whose sole occupation was to mix the ingredients appropriately and modify the contents as necessary to produce the finest glass possible. Batch material was then heated to create a frit. Frit is batch material heated until it fuses into blocks. Sometimes this included ground cullet (pieces of broken or recycled glass) or additional manganese and other agents to change the color and clarity of the glass.

The frit was then re-melted and impurities were skimmed off the top. During the final stages of glass preparation the glass frit material was melted and poured into cold water to remove further impurities. This process could be repeated many times in the formation of cristallo to create as clear and colorless a glass as possible. To prevent bubbles and striations in the glass, molten glass had to be stirred constantly. Constant stirring was necessary due to the lower temperatures in ancient furnaces. While stirring, manganese was often addede to clear up poor coloration and furnaces were stoked with wood to maintain temperature. The process of creating the cristallo base for Venetian glass was as integral a part of the beauty of the glass as the skill in which the molten glass was worked.

The glassmakers’ skill comes into play during the forming of the glass.

Molten glass was blown, twisted, and cut by expert hands. Trends of the day dictated that finer pieces of glass would be thinner and more delicate than utilitarian glassware. While thin glass had the additional benefit of not showing the same degree of discoloration or bubbles or striations, it also proved difficult to work with without breaking or becoming misshapen. Good glass was deemed so not only because it was delicate, but because it was also perfectly balanced and proportioned.

Expertly created glass had clarity of color, thickness of the rims, perfect symmetry and balance upon the stem, and refreshing, unique, but well balanced design. This required not only a steady hand, but an ability to create in real life something that existed prior only in the artisans’ mind.

After a piece of glassware was produced it was then decorated. The application of gold gilding and colored enamels was done not by the glassmakers themselves, but by a separate guild of artisans who specialized in painting glass. The enamels were formulated to allow durable, beautiful color. Enameling glass was a risky business: after the glass was painted, it had to be returned back to the glass studio for a final firing. This final firing helped fuse the enamel to the glass. The enamel melted at a lower temperature than the underlying glass, which allowed glassmakers to use heat as a fixative. However, this process could have led cooled glass to break from the rapid temperature change. Great care and consideration was taken in the creation of each and every piece of art glass.

The glassmakers of Murano not only produced stunning works of beauty and quality, they also have the distinction of being part of a trend setting, technologically advanced industry. Unlike other art forms during the Renaissance, glass making did not rely on inspiration from other outside forces to develop fully.

While painting and sculpture derived their inspiration from the Hellenistic and Byzantine eras, art glass was unique the times.

It set in motion patterns that other cultures would follow for generations. While cristallo glass would not be surpassed until the invention of lead crystal glass by the English, the flooding of Venetian styled fakes into the market and changing tastes in luxury goods caused the glass industry of Murano to wane in popularity. Quality glass goods from Murano are still being sought after till this day despite the slump in sales and innovations in glass purity are still being discovered. Even now, after hundreds of years since its glory days, Venetian glass is still highly desired for the excellence in its design and execution.

If interested in the beautiful history of Murano glass making, check out Glassmaking in Renaissance Venice: The Fragile Craft, by W. Patrick McCray
By Jamie Sue Austin

History of Murano Glass I