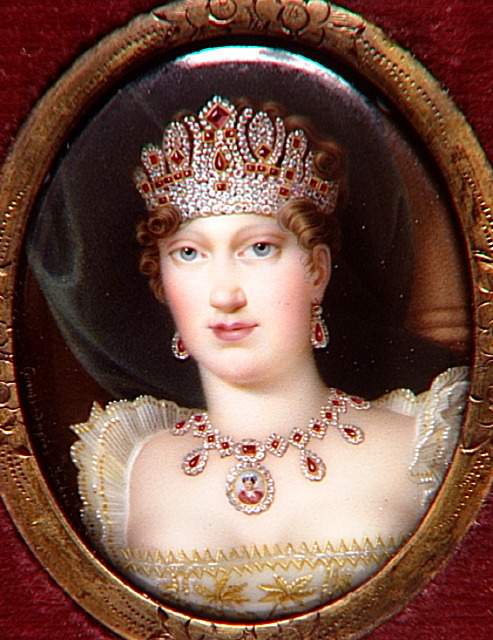 The story behind Italy’s most famous fragrance, Borsari’s Violetta di Parma, is a romantic historical saga.

In 1810, Marie Louise of Austria became Napoleon Bonaparte‘s second wife, and the Duchess of Parma. The marriage was a strategic political move on Napoleon’s part – Marie Louise was the daughter of the Austrian Emperor Francis II, and through the marriage Napoleon hoped to legitimize his own empire.

But it was in vain – just four years later, Napoleon was forced to abdicate and go into exile on Elba.

Marie Louise, with her son Francois, left Paris and returned to Vienna. Her family gave her the rulership of the Duchy of Parma in Italy, where she went to live in 1816.

Marie Louise had a gentle, loving nature and soon became popular with her new subjects.

She loved flowers, and in particular the shy wild violet, which seemed so like her in nature. She used the violet in her signature and often wrote letters in violet ink.

Marie Louise had violets sent from Austria and planted them in the gardens of her new home. She did eventually find happiness again, with her grand chamberlain, the Count of Bombelles.

But it was for the violets that she is remembered. Marie Louise adored the scent of violets and prevailed upon the monks at the Monastery of the Annunciata to use their alchemy to distill an essence of the lovely flower. This they managed to do, distilling essence of Parma violets into bottles for the Duchess’ personal use.

Marie Louise died in 1847, and was buried in accordance with her wishes in Vienna. Even today, she is associated with the flowers she loved so much and gifts of violets are left at her tomb.The monks jealousy guarded the secret method of distilling the fragile essence of Violetta di Parma, but it wasn’t until 1870 that it finally left those hallowed walls.

An Italian perfumer, Lodovico Borsari, visited the monastery and smelled the sweet essence of the flower distilled by the monks. Eventually he persuaded the monks to part with the secret method, and in 1897, Borsari set up his perfume business, selling Violetto di Parma.

Thanks to Marie Louise, violets now grew in abundance in Parma, and word of the entrancing new scent quickly spread.

From the sheltered monastery, to Marie Louise’ boudoir to the wide world, the Parma Violet became one of the most coveted of perfumes.

The beauty of this scent is that it is still as fresh and sweet as when it was first distilled. A very simple perfume, Violetta Di Parma

may seem naive by contrast to today’s more sophisticated blends. Yet it is this simplicity which makes it timeless.

Lodovico went on to create many more classic fragrances for his perfume house, Borsari di Parma. In 1880 he created Acqua Classica, a refreshing blend of citrus, sage, geranium, sandalwood, leather and oak musk that became popular with men.

Other lovely floral fragrances from Borsari include Lily of the Valley, Orange Blossom, Lavenda Alpina, and Tea Rose.

But it is the romantic story of Marie Louise and her beloved violets that lingers in the mind – just as the Borsari perfume lingers on the skin.