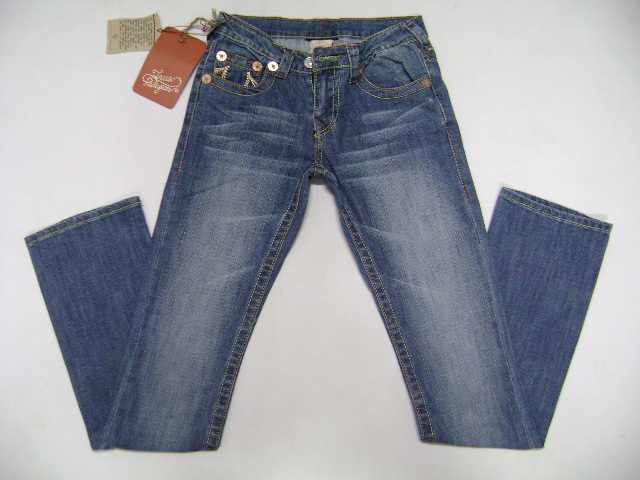 Blue jeans have been an important article of clothing for several decades. They have risen from being clothes for workers to adorning the most beautiful of fashion models. They have gone from being a symbol of physical labor to one of pop culture and designer fashion. Many useful items have also been created through the recycling of worn out denim jeans. With such a profound history, what can the future hold for American blue jeans?

The origin of the word denim is commonly traced to the fabric “Serge de Nîmes” from the city of Nîmes in France in the 15th century, but it was  first worn during the eighteenth century, largely due to successful trading practices and the plentiful production of cotton. The cotton material was produced to be durable. It was perfect clothing for physical laborers because it lasted longer and wasn’t easily torn. The term “jean” was said to come from Genoa, Italy, because the fabric was sold through the harbor of Genoa, and was first used by the sailors of the Genoese Navy.

Denim material was first worn during the eighteenth century, largely due to successful trading practices and the plentiful production of cotton. The cotton material was produced to be durable. It was perfect clothing for physical laborers because it lasted longer and wasn’t easily torn.

The 19th century saw the start of one of the most well-known producers of jeans in the world, Levi Strauss. Gold miners, fueled by the California Gold Rush, wanted clothing that would be tough enough to stand up to the physical demands of mining. Levi Strauss began a wholesale clothing business in 1853 in order to provide strong denim clothing to the miners.

The 20th century saw blue jeans slowly become symbols of pop culture. The 1930s brought western movies and the American cowboy, who wore blue jeans on the big screen. Seeing many heroes wear blue jeans sparked their popularity. The 1950s fueled the desirability of jeans even more as they became synonymous with teen rebellion in movies and television. The 1960s saw the individualization of blue jeans as people began to experiment with different styles and decorations, such as patches, embroidery, and wild colors. Perhaps the most memorable designs from the 60s and 70s era were bell bottomed and hip-hugger jeans.

Blue jeans reached a zenith in the 1980s when they drew the attention of major designers. Not only were blue jeans being glamorized, created in new styles, and marked with designer logos, but they were also being worn by the top fashion models and television stars of the day. The popularity of blue jeans skyrocketed.

That peak couldn’t be sustained as the demand for more traditional styles of blue jeans decreased in the 1990s. This trend was largely attributed to the idea that young adults didn’t want to wear “their parents’ jeans” and were in search of other fabrics and styles with which to make their own fashion statements.

What does the twenty-first century hold for blue jeans? The early years saw blue jeans being reinvented as designer wear– embroidered, painted, and otherwise embellished in a dozen different ways. Denim has also been utilized as fabric with which to make pillows, cushions, furniture throws, and other home decorations. This is not surprising, since people have been recycling old denim jeans for years, turning them into seat covers, purses, and the ever-popular cut-off shorts. Producers of denim jeans continue to find more creative ways to market blue jeans while wearers can find almost any vintage or current style desired.

Blue jeans have transcended all boundaries, proving that they can be durable clothing for workers and chic designer fashions for models – a true staple not merely of American fashion, but a clothing icon that is slowly but surely conquering the world.