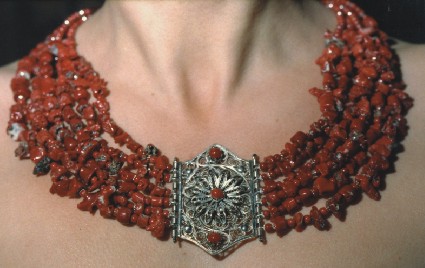 While traveling through Sicily, I had the honor of meeting the creativity and brains behind Marilu Fernandez, a coral design firm that is taking the European fashion accessories industry by storm. Someone introduced her to the dynamic mother and son duo in the Palermo showroom for a preview party.

She is a woman of elegance and refinement, but devoid of the pretentious air that often succeeds.They took me around the showroom, where we paused at each piece and Gabriele explained, with extensive knowledge, the origin of every stone and the significance of the design. So, their excitement and passion for the coral design collection is contagious. Everyone is easily surprised by the originality and charm of her creations.

In a world where globalization is the norm, the Fernandez family takes pride that their entire coral design collection is hand made in Italy. For them, producing anywhere else would be compromising the integrity of their collection. Some time ago, Marilu discovered stones can speak and she realized she could read their magic language. Undoubtedly, while growing up in Sicily, the corals bewitched her, which became the chromatic center of her jewels. Coral, known as “red gold” is the calcareous residue of a small sea mollusk. We find the coral beneath the crystal clear waters of the Mediterranean Sea.

For example, Marilu cleverly pairs coral, in its natural form, with precious stones and gold, silver, or bronze. Her whimsical and ethereal designs are inspired by ancient Egyptian jewelry. For example, she has this rare talent with a design that allows her to create coral design jewelry that is regal and dramatic. Moreover, it maintains the organic nature of the coral.

A family business in Milan, Italy

Surely, Marilu Fernandez coral design collection is a family affair first and a business second. Nearly 30 years ago, the company was born in Palermo, Italy. Gabriele, a true gentleman with a great sense of humor, is the only son of the Fernandez family. He resides in the fashion capital of Italy, Milan, to run the family business. His longtime girlfriend often models for the coral design collection.

After that, Marilu Fernandez first exhibited in Milan in 1985 at the “Galleria Meravigli.” For instance, her work has been showcased in galleries and museums in London, Brussels, Rome, Paris, Kyiv, Bologna, Turin, Florence, Treviso, and Strausberg.

In 1991, the Museum of Oceanography in Montecarlo invited her to visit.

In other words, she was so original that one of her coral design creations was even featured on the postage stamp of Monaco, and one of her most highly rated necklaces has appeared in an Italian movie.

Meanwhile, the collection is quickly making its mark on the world, it will always have a small distribution, due to the rarity of the materials used and the extensive time that goes into creating each piece of jewelry.

As a coral designer, Marilu’s creations are heirlooms. Moreover, the pieces are directional, and the finished product is one of true quality and impeccable taste, something that never goes out of style.

Above all, Marilu Fernandez’s coral design collection is the ultimate in luxury: coral couture that can be worn for an entire lifetime. Moreover, the necklaces can transform a woman of any age into a showstopper and have already built a reputation as the highest quality coral jewelry among the jet-setting elite.

“There comes a time in people’s lives when they desire to express themselves. The very joy of being alive is beyond the power of mere words. There are some who communicate it through music, some with songs or paintings. I explore the mystery of the beauty of corals, and how this mystery is related to our roots in the forms of the corals. The natural ramifications, help me express this originality through the shapes of my creations. This is the story of my coral designs.”

I think they are matching very good with gold

I saw once a necklace with coral it’s very beautiful

The idea of using corals is amazing !

It’s incredible what you can do with passion. Handmade accessories are unique, they have a part of the creator in each new piece and I think that people should buy more to help the creators spread their artistic creations. This woman is an inspiration!