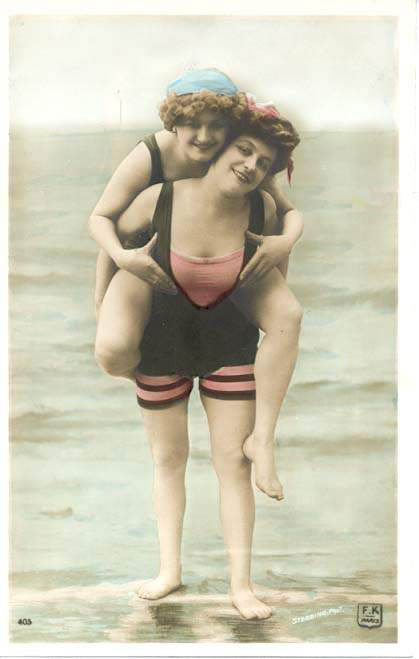 Over sixty years ago, this now-ubiquitous-then-controversial swimsuit made its debut at a pool-side party in Paris. In this day and age, it is hard to comprehend the shock of the general public when this over-the-top swimming attire stepped into the limelight. Even the French models who were supposed to sport the latest trends rejected the bikini. In truth, however, history and archaeology seem to show us that two-piece swimsuits were known much earlier than we think.

This article will discuss how the bikini became originated and slowly got accepted in the Western world, from the French Riviera to the streets of Hollywood, USA, eventually becoming a beach front staple.

Historians and archaeologists suggest that the bikini has been around since the beginning of the Roman Empire. A famous mosaic from the 4th Century AD, found in the Villa Romana del Casale (Piazza Armerina, Sicily), shows several Roman gymnasts wearing bandeau tops and bikini bottoms. Statues of women with cloth covering their private parts were also found in the ruins of Pompeii. Furthermore, since public bathing was a common tradition for ancient civilizations, women in ancient Rome wore swimsuits that bore a striking resemblance to modern day bikinis. So, it is safe to surmise that it was not the French, but the Italians who came up with the [original] idea of the bikini.

At the turn of the century, displays of semi-nudity were certainly not permitted. Females went to great lengths to keep themselves modest while swimming at the beach. They were required to wear voluminous bathing costumes and use the bathing machine, a Victorian contraption which consisted of a small wooden hut on wheels. Women were permitted to change into their swimming costumes while horses (and sometimes, humans!) pulled the cart into the surf. There,  the women were able to swim without being seen from the shoreline.

However, in 1907, Australian swimmer and silent-film star Annette Kellerman was charged with  indecent exposure: she was seen on Boston’s Revere Beach wearing a form-fitting, sleeveless tank suit. This incident paved the way for beaches across America to allow women to wear one-piece knitted maillots, and relax their swimwear restrictions.

By the 1940’s, the two-piece swimsuit, which usually consisted of a controlled halter-top and modest bottom that covered the navel, derriere and hips (think fluffy granny panties), were seen on the bodies of Hollywood actresses such as Ava Gardner and Lana Turner. Apparently, showing off one’s ribcage was now permitted, but the showing of the female bellybutton was considered scandalous.

It was in 1946 that the bikini was introduced into the modern world by Frenchmen Jacques Heim and Louis Reard. They named their creation after the Bikini Atoll in the Pacific, site of the Operation Crossroads nuclear weapon test on July 5, 1946, hoping that it would generate excitement on a similar scale to the noise generated by a nuclear bomb.

But the bikini met with a lot of resistance across Europe and the US, and did not have much of a market. The magazine Modern Girl declared that “it is hardly necessary to waste words over the so-called bikini since it is inconceivable that any girl with tact and decency would ever wear such a thing”. The first move towards acceptance of this tiny piece of swimwear was when Brigitte Bardot wore a bikini in And God Created Woman (1956), helping its popularity in Europe and the US.

The bikini came to be more accepted in American circles in the 1960’s. Perhaps it was the fashion for private pool parties to increase the popularity of this hot new item, as it gave women a secluded place to test out the new look. Department store Neiman Marcus advertised the bikini as “a big thing” for the 1960’s. Brian Hyland’s 1960’s song “Itsy Bitsy, Teenie Weenie, Yellow Polka Dot Bikini,” gave a new meaning to the bikini for the generation of women who were catching onto the latest swimsuit trend. There was still a lot of caution, however, as the song’s protagonist was “afraid to come out of the water”. Finally, in 1966, the swimsuit appeared in such blockbusters as Raquel Welch’s One Million Years B.C., which paved the way for its popularity and acceptance in the seemingly conservative United States of America.

For a long time, the Brazilian bikini (typically, low-slung hipster bottoms and tops that emphasize a larger bust, with stabilizing lace-ups and under-wire support) was banned from Catholic countries such as Italy, Portugal and Spain. But since the 1980s, women in many European countries (including Italy) go topless while sunbathing at beaches, wearing only  bikini bottoms, a trend renamed “monokini.”  The irony here is that while the conservative Catholic countries permit topless women in public, the mainly Protestant United States remains very resistant to this trend.

In the 70’s and the 80’s the media declared that only “perfect figures” were allowed to wear bikinis. Since then, a number of swimsuit designers have encouraged women of all ages and body types to wear this once provocative two-piece. And should you choose to be less inhibited, there are now many swimsuit options, which have evolved from the bikini idea. These include the string bikini, tankini, microkini, pubikini and even the sports bikini.

Simply put, the Italians knew what they were doing for a long time indeed. If those living in Pompeii and ancient Rome could see what their strips of cloth have evolved into, would they have been thrilled? Truth be known: the bikini of the twenty-first century has gotten tamer. It still has the power to sexually stimulate, but it has lost the power to shock.

Edited and Updated by Damyanti and Francesca Bezzone