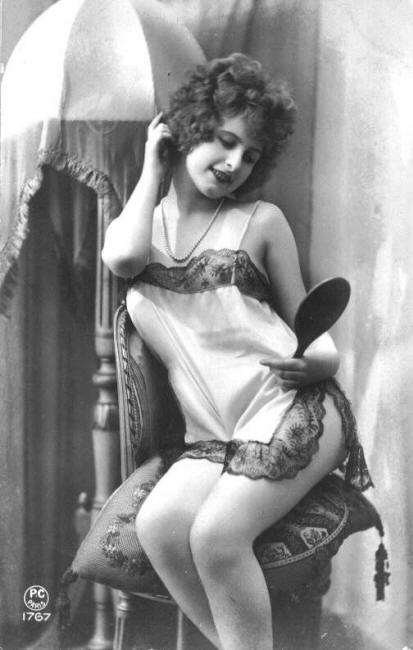 Colorful thongs, leather garters, peignoirs, latex sports bras and the French maid outfit: today, lingerie today is readily available in any style or fabric you can imagine. In order to understand how far lingerie has come, it is crucial to take a closer look at the history of lingerie throughout the ages. During the last hundred years, women’s fashion has seen a radical march forward, and the evolution of lingerie has illustrated this change. In fact, the undergarments of the past have often been painful, even dangerous, and sometimes just outright bizarre when compared to the elegant, yet erotic creations of the present day.

The Minoan women on the island of Crete wore a tight bodice made of bone that pushed their breasts over and out —exposed for the whole world to see. Though some may consider this an instance of devaluing women, based on evidence historians suggest otherwise: the display of breasts showcased the women’s ability to create life. This has caused many to believe that these ancient societies were egalitarian and that they cherished the symbolic link between humanity and the flow of nature.

The Romans did not wear undergarments under their various togas! On occasion, they would wear a pair of shorts or loincloth called the subligaculum. Women would sometimes cover the top part of their bodies with a strophium (breast-cloth), as evidenced on the frescoes of the Villa Romana del Casale (4th Century, Piazza Armerina, Sicily), which shows several Roman gymnastics with their private parts covered.

Fast forward to the Roman Empire. A chemise (often considered a precursor to the t-shirt) was worn between the skin and the outer garment during the Medieval times. This was done to protect the woman’s clothing from sweat and other forms of bodily secretions. The outer garments were seldom washed, so it made sense that the chemise was to be washed regularly. Often considered the era of sexual denial, the Medieval times provided lingerie that flattened the breasts to the point of non-existence!

Rebirth of the Curves

The Renaissance can be seen as a rebirth of a new focus on female curves; except for the fact that women went to unforeseeable extremes to achieve that perfect hourglass figure! Many women at the time were voluptuous, yet they were forced to wear corsets that were tightened to the point of being dangerous. Though corsets were seen predominantly in England and France, Italian women soon picked up on this trend.These corsets caused some women to pass out from excessive compression!

During the 18th century, the cleavage came into fashion and lingerie was designed to emphasize its beauty. Though corsets were still constructed with whalebone, a bold move was made towards the decorative lingerie you know today. Push-up corsets were lavished with lace, embroidery and ribbon. Since doctors were now speaking out on the hazards of extremely tight corsets, less restrictive designs were finally introduced.

The Dawn of the Lingerie Revolution

A century later, the lingerie revolution occurred. Corsets became smaller, less cumbersome and allowed for freer movement and easier breathing. There was more support for the breasts and for the first time in the history of fashion, the “brassiere”, (French for support,) was introduced and patented by Mary Phelps Jacobs. The 19th century also introduced stockings, which are considered the forerunners of modern-day knee and thigh-highs. Stockings were held up by garters and suspenders that attached to the corsets. Un-seamed, frilly drawers were also worn and would sometimes go straight to the knee.

When the men went off to fight in the First World War, women found themselves the breadwinners of their families. Their new identities beckoned the demand for more practical undergarments. Brassieres had to be light enough to be worn in just about any industrial work condition. This led to the use of lighter and more breathable fabrics. Style became functional and focused on support over appearance.

The Roaring Twenties saw an end to the corsets. New ideas on sexuality and beauty were made popular by the Flapper Girls. Boyish physiques were popularized with short bob hairstyles and flapper dresses.

The female physique was supposed to be smooth and free of curves, and women wore light chemises, bloomers, and bodices to help achieve that look. Another liberating change: the introduction of  undergarments in different colors!

A decade later, flat breasts were no longer fashionable. Lingerie of the day focused on feminine proportions once again, and a bra that enhanced the breasts was born. The girdle also became a popular piece: although full breasts were considered beautiful, fat was not. The  elastic fiber Lastex, invented by Dunlop Rubber, was also  introduced into the production of lingerie during this time. It enabled lingerie markers to offer undergarments in a variety of sizes for every female body type, size, and shape.
In 1935, Guia la Bruna’s grandfather founded a lingerie factory in Turin. The Guia la Bruna brand upholds the tradition till today, producing high quality intimate wear. Meanwhile in the America of the 1940s, the push-up bra was invented and Frederick Mellinger started his own lingerie business in his tiny Manhattan loft. A year later, he moved to Hollywood and thus, the retail lingerie store Frederick’s of Hollywood was born. This was the first time lingerie was made for reasons other than practicality, and Frederick’s pieces were famous among many Hollywood stars. Up until then, nobody except for the Can-Can dancers at the Moulin Rouge ever bought undergarments in order to be seen in them.

Despite the bra burning trends led by the Women’s Liberation Movement of the 1960s, lingerie in every shape and form was here to stay. In Italy, a woman named Ada Masotti, started making corsets for wealthy women, which led to the establishment of the La Perla company, which makes some of the best intimate wear in the world today. By the 1990s, Frederick’s of Hollywood and Victoria’s Secret became two of America’s largest lingerie retail chains. Designers were constantly coming up with new styles of lingerie to fit the demands of those purchasing it. Furthermore, modern lingerie started to fall into two categories: undergarments designed with function and modesty in mind (slips, camisoles, sports bras, t-shirt bras, etc.) and lingerie that was more racy, consisting of garments that were typically worn in the bedroom and designed for show.

Today, lingerie appears in many forms, designs and sizes for a myriad of purposes. Not surprisingly, the thong underwear is the most popular and fastest selling item. In 2002, Victoria’s Secret sold over 20 million pairs of thongs alone, and the numbers keep growing. Though the United States considers the thong controversial in many aspects, many high school girls own nothing BUT thong underwear. As the world heads further into the 21stcentury, it will be interesting to see what sort of ingenuity designers would display in creating new types of of intimate wear.

The Italians are famous for their sexy, yet romantic and classic lingerie designs. Notable Italian designers that have taken on the lingerie challenge include Giorgio Armani, La Perla, Guia la Bruna, Cosabella and Flora. For those of us who prefer excellent quality at reasonable prices, chain lingerie stores such as Intimissimi, Yamamay and Tezenis provide just that. The days of trying on everything and finding nothing in your price range are finally over thanks to the many varieties of lingerie available  today.