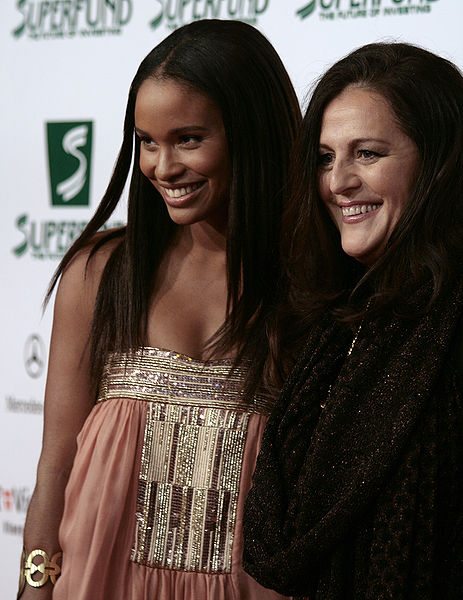 Franco Moschino, a native Italian, was born in 1950 in the small town of Abbiategrasso, near Milan. Sadly, Franco’s father died when he was a young boy of four. As a way to fill the void, Franco developed a keen interest in art and drawing as a young child.

Pursuing his love of art, Franco Moschino attended the Accademia di Bella Arte in Milan in 1967. However, in order to finance his education there, he began to sketch fashion designs and illustrations for fashion magazines and houses. Eventually, his clever designs caught the eye of fashion designer Gianni Versace.

In 1971, Franco Moschino began his fashion career with Gianni Versace as a sketcher, when he was asked to draw for a publicity campaign.

His sketches were for a collection of ready-to-wear, Genny and Beged’Or, two of Versace’s collections at that time. In 1976, Franco also took on a position as a designer with another Italian fashion house, Cadette.

In 1983, Franco left Versace and opened his own company, Moonshadow, on Via Ceradini in Milan, under his own label, Moschino. His first showing was wildly successful, as was his second show.

Moschino was well-liked by the press for his playful nature and flaunting of the so-called norms of fashion. He was essentially the carrier of Schiaparelli’s legacy, his work was the same mixture of art, surrealism, irreverent charm, and innovative design as the famously iconoclastic Elsa.

Although established fashion houses looked on in horror at the sensational acclaim garnered by Moschino, the adoring fans clamored for more. More is exactly what Moschino gave them- more powerful and evocative combinations and creations, more irreverent styles, and more out-of-this-world fashion.

Although Moschino wanted people to laugh at fashion, he knew they took it too seriously to laugh for long. Moschino grasped the challenge anyway, creating thought provoking fashions replete with original messages through text on cloth or visual puns for his adoring public.

Next, Moschino Couture! was launched. In 1986, his men’s line began with an introduction of men’s fine underwear, Uomo. A fine oriental fragrance for women, “Moschino,” was introduced into the world of fashion in 1987. In 1988, his first boutique opened on Via Sant’Andrea in Milan, Italy.

Then, a Moschino fragrance, light, floral, and fruity in scent, was released under the name, “Cheap and Chic.” In 1994, a collection, Ecouture, launched specifically for the purpose of using only environmentally friendly dyes and fabrics was created.

Moschino’s clever sense of the inane shined through in almost everything he did and said. His sense of fashion flouted the norm, the contemporary, the classic, and the established. Willing to take that walk out onto the gangplank and tempt the tides of fate, Moschino proved time and time again that he was indeed the man of fashion with an exciting twist. His sense of style was uncanny, his sense of cut and proportion perfect, and his sense of what the public was willing to buy right on the mark.

Sadly, Moschino died before his time at the tender age of 44. Rosella Jardini, the chief designer, and Marco Gobbetti, the chief executive grasped the reins after Moschino’s death to lead Moschino’s Fashion house, still located in Milan, Italy. Together they strived to continue Moschino’s fashions in the fun and truly extravagant way that Franco had so popularized.

Though the brand was acquired in 2001 by Aeffe SpA, the growing fashion empire founded by Alberta Ferretti, Jardini has remained the brand’s creative director. She has brought a renewed wearability to the brand, without losing touch with its irreverent, humor-filled past. As a result, Moschino is on the up-and-up , and in 2007 the brand generated almost $187.4 million in sales, which is a steady increase from its sales figures from the previous years.

Women of all ages love Moschino’s designs, especially the clever use of attachments that are out of the ordinary, artwork that is reminiscent of childhood favorites, and a playful disregard for the expected. This is why Moschino has three women’s labels ‘Moschino Main Line’ , the high end, ‘Moschino Cheap & Chic’, the middle range, and ‘Love Moschino’, the most affordable Moschino range. Men have not been ignored either, Moschino menswear collections are ‘Moschino’ and ‘Moschino Jeans’. The Moschino brand is now often seen on celebrities like Beyonce, Nicole Kidman, Jessica Alba, Alicia Keys, and Paris Hilton.

Franco Moschino’s untimely death in 1994 has left the fashion world bereft of his enigmatic and dazzling personality, eclectic fashion statements, and avant-garde visions. His goal was to set the fashion world on its ear by upsetting the norm and instead he achieved a level of success he found embarrassing. Before his death, Franco Moschino founded a non-profit organization to which part of the Moschino proceeds go.

A charismatic, innovative, and imaginative man, Moschino was a gift to the world of fashion. His eclectic array of fashion items includes jeans, casual wear, eveningwear, shoes, ties, lingerie, eyeglasses, watches, and perfume. Moschino’s legacy and interpretation of fashion continues without him as his fashion dynasty expands to more products and continues to produce new and clever fashions.