The Invention of Skirts

Skirts can be sassy, flirty, businesslike, severe, fun or elegant, but all of them definitely emphasize one quality; and that is femininity. There was a time when the European women wore nothing but dresses and skirts, even to the point that the word “skirt” became slang for “woman” in the English language. But skirts were not always as feminine as they are today.

The History and Evolution of Skirts

Skirts are one of the oldest styles of garment known to mankind: after the loincloth, it was the skirt that graced the human form. Once a rectangular piece of material, be it animal skin or leaves woven together, was wrapped around the waist, the essential skirt was created.

early symbols with man in skirt

Importantly, men as well as women wore skirts, and ancient art shows remarkably “manly” men in skirts. But as time passed, it was women who became known for wearing skirts with few exceptions like Scotsmen, who still wear their kilts on traditional occasions.

Women wore their skirts long as a mark of their modesty as well as their prestige, because before the Industrial Revolution, fabric was expensive. Until the 19th century the skirts of dresses emphasized the waist while enlarging the hip , and as is evident from the picture of the society lady and the design sketches, skirts were usually voluminous and long. 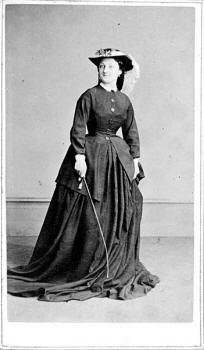 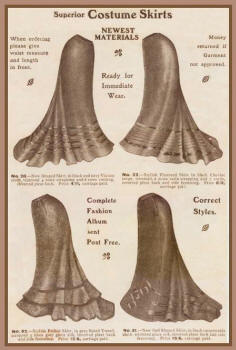 But things began to change in the 19th century, with skirts becoming more streamlined to the body. In the 20th century, the hardships of war required women to wear shorter, more work-friendly clothing. This marked the beginning of the upward journey of the skirt hem, which went up from ankle-length, to calf-length and then the knee length by the 1960s.

But the defining moment for the modern skirt arrived in the 1960s, when inspired by the 1965 short skirts by André Courrèges, Mary Quant, took the hem up by a few notches to give women the new length that was here to stay: the mini, shown below. 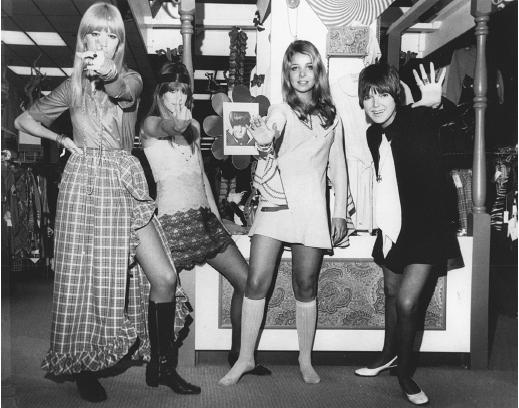 It was Quant that gave women the freedom to really choose the length of their skirts, which went to later become the micro-mini as seen on the three American cheerleaders in the picture below. 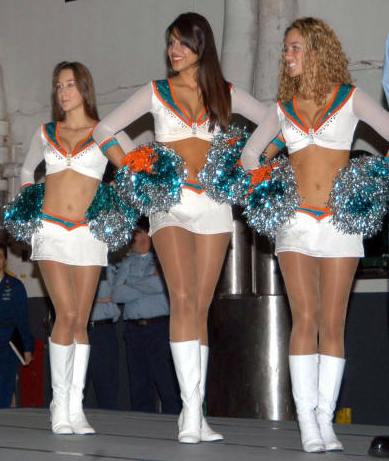 The micro-mini is now worn on its own, with stockings or with leggings. The low-waisted fashions of the previous years have affected the skirts as well, and skirts with low waists and extremely high hemlines are now seen often on ramps, as well as on young women at nightclubs or parties.

Skirts have become a staple in any woman’s wardrobe: their ability to mix and match with the same tops that are teamed with jeans and trousers make them convenient and versatile. In the decades of the 20th century, the hemlines have risen and fallen, and we now have the legacy of all the different skirt lengths possible.