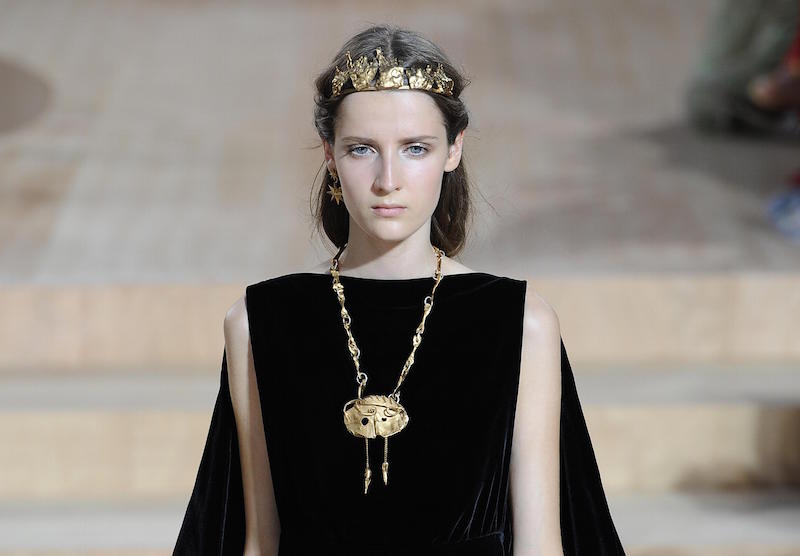 Rome represents the core essence of the Valentino brand, though the company has long gone global.

The Eternal City is where Valentino Garavani founded his couture house in 1960 and where he was honored in 2007 with a retrospective at the Ara Pacis Museum and a show at the Monumental complex of Santo Spirito in Sassia, reaping the rewards as Rome’s most glamorous name for half a century.

The boutique will be the brand’s largest worldwide, with 1,865 square meters in the historic Piazza Mignanelli where the house was founded and where its heart continues to beat.

Although the designers usually close the Paris couture week, in the seven years since they have taken the helm of the fashion house they have never stirred far from its Italian roots and Roman heritage.

Indeed the presentation of the Mirabilia Romae collection kicked off with an exhibition of couture dresses from previous seasons displayed across 10 stunning closed-to-the-public locations that have represented a source of inspiration for the designers.

The tour, which was curated by art historian Filippo Cosmelli together with Chiuri and Piccioli, included a third century AD Mithraic grotto discovered in the 1930s, and culminated at the Pecci Blunt Palace and at painter Giorgio De Chirico’s apartment-turned-museum in Piazza di Spagna.

The runway show matched the grand setting prepared for the hundreds of guests who were flown in to attend.

As the sun was setting over Piazza Mignanelli, Rome cast its spell on the 59 looks, with the predominant black shade stressing the ‘noir’ side of the city and splashes of red catching its regal essence.

The restrained elegance of the collection powerfully conveyed the duality at the heart of the designers’ aesthetic – sensuality and monasticism – gracefully mixing the multiple references to Rome’s history.

Historic quotes were used to highlight the unique cultural stratification that constitutes the core essence of the city.

It was in the wings of an eagle found on the 16th century frescoes at Valentino’s atelier embroidered over a long black dress.

The city echoed in the sumptuous wool and velvet cape reproducing the arcades of the Coliseum, opening over a tulle dress inspired by lions’ cages, and in gowns draped like Roman peplums.

Its Forum echoed in a poncho, while a cape paid homage to the Pantheon.

A ‘gladiator’ dress was a superb rendition of the uniform of fighters in ancient Rome with a black tulle ‘armor’ and embroidered pearls.

The jewelry inspired by the Satyricon of Petronius was designed by sculptor Alessandro Gaggio.

The catwalk set on the sidelines of Piazza di Spagna strove to recreate an archaeological setting in order to compound the feeling that viewers were getting a unique insight into the Roman soul of Valentino’s haute couture.

And the connection between the fashion house and the city rendered by the collection’s ravishing mixture of sacredness, mystery and Dolce Vita opulence was honored with a standing ovation as the design duo took their post-show bow.

The event marking the major store opening included a gala dinner at Villa Aurelia for 700 guests and a special ready-to-wear capsule collection with accessories bearing the symbol of the Roman Empire, a golden eagle.

Valentino, one of the mainstays of the Parisian couture schedule, is set to be back in the French capital in January 2016.

Watch the video of the show: