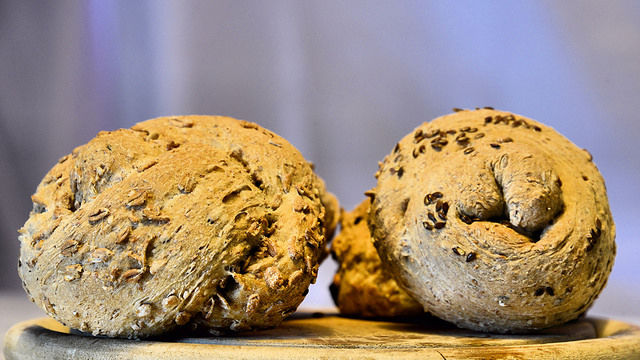 Although pizza, spaghetti and other pastas are normally associated with Italy, bread plays an extremely large role in the diets of most Italians. There is rarely a meal served in Italy where bread is not included. Italy and the word “bread” just seem to go together as a pair.

A History that starts in the Neolithic era

Although no one really knows when the first loaf was baked, bread has been around for thousands of years. The presence of stone utensils and ovens dating back to the Neolithic seems to be witness to this. Bread was initially unleavened, as the first yeast was introduced by the Egyptians around 4000 years ago. In ancient Rome bakers were considered important members of society, as bread had an essential role, both for nutrition and religion: it was usual to bake and offer ritual loaves of bread during festivals to the gods. This was actually so common that, often, ovens were even built in temples.

Romans were also the first to produce the type of flour needed to bake what is known today as “white bread”, and they improved wheat’s milling techniques. Around 100 BC, it is believed that Rome contained more than 200 commercial shops that baked and sold bread. About 200 years later, in 100 AD, a baking school was established in Rome.

It is pretty clear that the roots of bread making in Italy go far back in time. The average Italian will consume half a pound of bread a day. All Italian bread is not the same, however. This is a common misconception – that Italian bread is only one type of bread. If you travel to various cities in Italy, you’ll discover that each area has its own distinct recipe for making bread.

The vast popularity of brick ovens throughout the centuries has contributed a great deal to the abundance of bread production in Italy. Round ovens built from brick or local stone have been around in Italy for a very long time. Unlike other nations, where individuals rarely owned full rights to use an oven, ovens in Italy were typically owned by families and were smaller in size.

How to prepare Italian bread at home

Wait about 2 hours for the dough to rise.

At this point, do NOT use an electric bread maker to cook the bread.

Since I assume most of us do not have a wood firebrick oven in the house, the next best thing is the use of a pizza stone in a normal oven. I have had my pizza stone for over 10 years and I use it to make nice crusty breads (bread does not cook well in a bread machine).

Remove the bread dough from the mixer. Roll it up in some flour and shape it any way you like. Bake it in the oven until done (cooking time depends on thickness of the bread, but the average is 25 minutes at 450 F). If you warm the oven enough and you use a pizza stone you will have a nice, thick crust.

My home cooked bread is always a big hit with my guests and many time I have been asked for the recipe.

In case you need some visual help, here is a video on how to make a good batch of Italian bread dough!