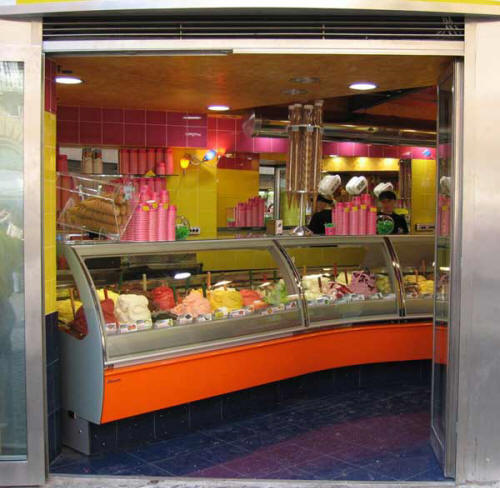 The types of restaurants and bars you find in Italy are many. Not all eateries are the same and differences are not only to be found in the menu, but also in their price range, as well as in their overall look and appeal.

Let’s take a better glance at the various types of eating places you can come across in the Belpaese, with a bit of essential info on what you can expect from each of them.

This is not your US-style bar. Places similar to what we know as bars in the States usually are called “American bars,” and they are generally part of hotels.

While you can buy beer, brandy, or other alcoholic beverages at Italian bars, their central feature is the espresso coffee machine. You can have a caffè or espresso for about 1 euro (1.10 USD) or a Cappuccino for about 1.20 euro (1.50 USD). Italians visit bars throughout the day, but especially in the morning when pastries are served with coffee. The quintessential “cappuccino e brioche” of Italian breakfasts comes from here!

A large number of bars in Italy offer aperitivo from 6 to 8 o’clock, but only a bunch of them will stay open later than that.

A place where you can drink wines. You can usually buy the whole bottle or consume by the glass. Here you can also find good wine to buy and take away. Enoteche are the equivalent of wine bars in the US and often offer food, too, especially fine cheeses and cold cuts.

This is a US-style bar. Usually opened just in the evening, the cocktail bar offers drinks, mixed drinks and cocktails with limited food choices. Mohitoes, margaritas, martini and cocktails of all kind are prepared by an expert bartender.

It has become particularly trendy in recent years and that’s why, usually, here you can come across a younger crowd sporting fashionable clothes and designer haircuts.

We all love gelaterie. They serve home made gelato and, sometimes, also coffee. Here, however, people usually go to try and enjoy Italy’s favorite iced treat. Many have sitting space, but don’t be surprised if you won’t find any: many gelaterie, and very good ones, too, are often small and there is only enough space for the gelato counter and the cash register, so it’s all a “pick your flavors, pay, grab that cone and go” most of the time!

Giolitti is one of the most renowned in Rome and it is surely worth a walk. I Tre Scalini in Piazza Navona is famous for its tartufo ice cream but expensive: somebody has to pay for the location.

Pastry shops, often connected to or part of a bar. Pasticceria has a wide variety of cakes and pastries on sale and it is where you go to get your birthday cake and your tray of paste on Sunday morning.

Many serve foods other than pastries such as sandwiches (“panini,” literally, “little breads”). If panini are advertised on a sign, again, you could expect a larger selection. These are excellent places to get a quick, inexpensive snack or lunch. As in a bar, you pay first and order second.

Literally, a “hot table.” The closest US translation is “grill.” In a Tavola Calda you can expect a better food selection than in  bar or pasticceria, as hot dishes are usually featured, too. Some are small with only a few choices each day, and you select what you want from a glass-enclosed display. Most have a few tables. More elaborate ones are similar to US self-service cafeterias.

The realm of french fries and roasted meats, most often whole chickens, reason for which they are also known as pollerie. They may offer supplì (balls of fried rice with mozzarella inside), crocchette (balls of deep fried mash potatoes, similar to tater tots), pizza al taglio (pizza by the slice), and other inexpensive lunches or quick dinners.

Just like in the US, a restaurant offers a large-selection menu and full waiter service. These range from small and intimate to very large and ornate (and sometimes expensive).

Just like in the US, pizzerias sell pizza. Pizza was invented in Italy but is quite different from the pizzas served by US pizza chains.

Italian pizzas are individually-sized, no more than 10-12 inches in diameter and come covered in a wide variety of toppings. Most pizzerias also sell other foods, and many other types of eating places also sell pizza. For example, a ristorante-pizzeria offers pizza as an alternative to its full restaurant selection.

La trattoria has full waiter service, but is usually a smaller, family-run restaurant. The menu is more limited, the décor usually less ornate, and the prices lower than a ristorante.

Here’s where things get confusing. Traditionally, an osteria is an even simpler, cheaper version of a trattoria and a restaurant. Osteria was also considered the more popular version of the enoteca, its yuppie cousin.

Usually, an osteria would serves homemade food and local wines, some snacks  and would have a limited food menu. However, lately some super fancy restaurants embraced the name osteria: just think of three Michelin starred Osteria Francescana di Massimo Bottura. This new meaning is about the opposite of what osteria traditionally stood for.

So, what is an osteria today? Well, either a traditional family-run eatery, or a Michelin star ultra fancy place. Check the prices on the menu before sitting down!

In Rome, la taverna is an unpretentious place that offers food. In other areas of Italy like Piedmont or Liguria,  it usually refers to a place where elderly people go drinking and it’s today gone out of fashion.

So, well… it could be anything and its opposite!

Moral of the story

While in the past each place had its own characteristics and specific identity, it’s not uncommon today (as  in the case  of the above mentioned osterie) for upscale restaurants being called osterie, taverne being enoteche and gelaterie offering also coffees and other hot drinks.

So, our advice is to always double check online (or on the menu outside the door!) before booking, to make sure you’re really getting what you expect in your plate and on the bill.

Or bistro, to say it in English. It’s a recent addition to our set of restaurant synonyms. This is usually a fancy restaurant with modern but simpler food and  the menu may often be not as complex as that of a typical ristorante. Don’t be fooled by the fact they offer sandwiches: bistros can be very expensive indeed!

Take a look at some of the best Rome Resturants

Italy is a paradise for foodies for sure. So, you can also lose your senses in all the gastronomic delights that the Eternal City and the other cities like Venice, Naples, Florence, Milan, brings to you. Also, delve in the finest Vatican Tours for an immersive experience along with the delicious food that you savour!